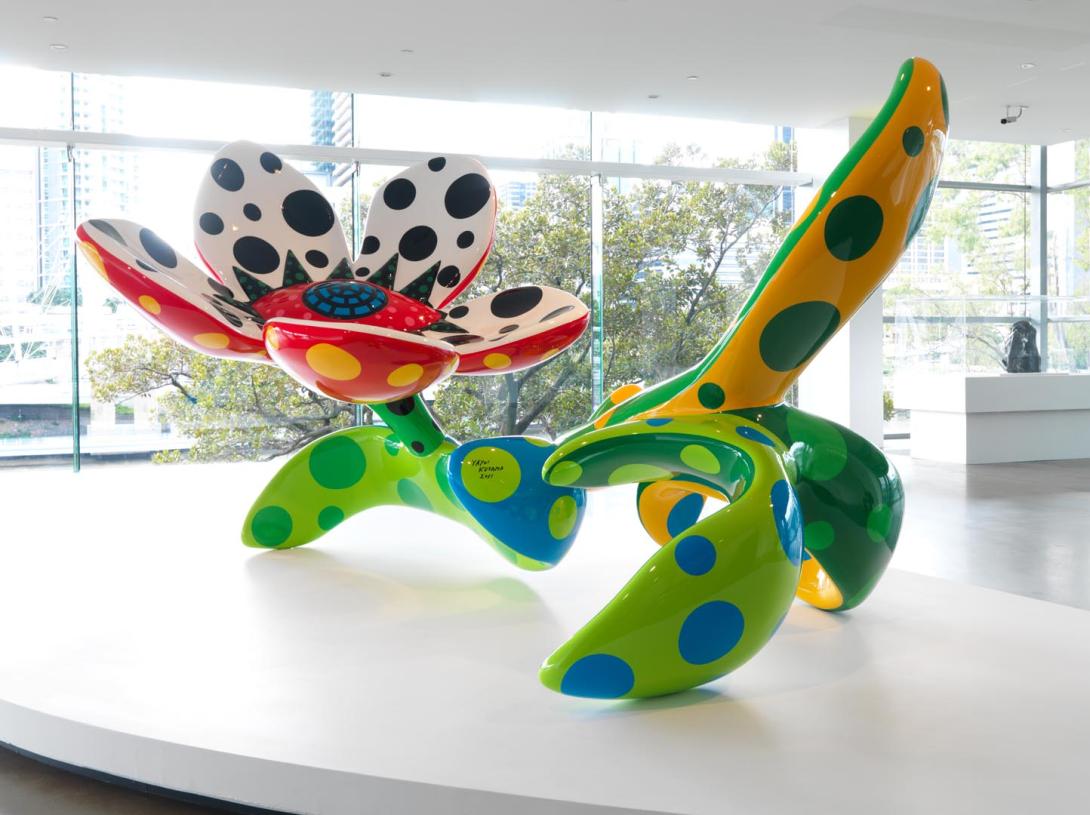 Flowers that Bloom at Midnight is drawn from a series of 18 such sculptures in a variety of sizes, poses and colour schemes, on which Yayoi Kusama has worked since 2009. Its shiny surface, polka-dotted petals and great, staring eye recalls the animated alien flora of science-fiction and fantasy, while its larger-than-life scale, sleek flowing lines and vibrant colour combinations encourage appreciation from multiple angles. Indeed, each line of vision has been thoroughly checked by the artist, whose process involved modelling the flower in miniature in order to examine each possible line of vision before the full-scale version could be commissioned.

Flowers have long been an important component of Kusama’s oeuvre. Their symbolism reflects many of the artist’s conceptual preoccupations as well as her disregard for dichotomies: they connote life and death, celebration and mourning, masculinity and femininity; while their complex forms - organic, fragile, finding uniqueness through repetition - echo throughout Kusama’s practice.

In plentiful supply thanks to her family’s nursery business, flowers flourished in Kusama’s first reported childhood visions, consuming entire rooms and communicating ominously with the artist. As a means of intuitively working through these experiences, flowers figure in many of Kusama’s earliest paintings and drawings, her subjects found in the fields and seedbeds near her family home. In a famous photograph of the artist at the age of ten, she is almost obscured by enormous dahlias.

Flowers remained a staple motif in the painterly experiments of Kusama’s first decade as a professional artist. Like her signature polka dots, flowers reappeared in her ‘happenings’ of the late 1960s - in the sympathetic environment of the anti-war counterculture - as they fitted neatly into the context of the contemporary ‘flower power’ movement. More poignantly, they feature in the melancholic collages she made after returning to Japan in the mid 1970s, as a way of dealing with the deaths of artist Joseph Cornell (her longtime lover and confidant), and her father, Kamon.

Their forms would later emerge menacingly from masses of tendrils in her human-scaled soft sculptures of the 1980s, while her 1998 novel, Violet Obsession, describes the experiences of a young girl persecuted by her mother, who discovers she can converse with flowers as agents of the universe. Flowers that Bloom at Midnight finds direct precedence in a series of outdoor sculptures Kusama has executed over the past decade. Monumental in scale, these works consist of floral forms that are at once simplified and fantastical, and finished in polka-dotted planes of vivid colour.

For all the strange and overwhelming power of the scale and alien appearance of Flowers that Bloom at Midnight, its air of playful, if uncanny, sexuality, in concert with the work’s comical styling, pristine surfaces and exuberant tones, is decidedly joyous, contrasting strongly with the darker function flowers performed in the artist’s earlier works. In this sense it is representative of character of Yayoi Kusama’s recent practice, whose turn toward brighter, bolder hues and a generally optimistic tone has accompanied the worldwide popularity the artist currently enjoys.