1000 FROG POEMS: 1000 BOSS DROVERS ("YELLOW LEAF FALLING") FOR H.S. 1996-2014 comprises 2400 individual drawings, all deliberately executed as if by the hand of a ten-year-old. Over a 20-year period, Robert MacPherson made these in the guise of his alter ego, Robert Pene, a grade 4 student at St Joseph’s Convent, Nambour, Queensland. Each sheet includes a portrait and a name, sometimes a caption added in Pene’s uncertain script. The project is dated 14 February 1947, and each sheet is stained to give it an aged patina.

Robert Pene has an obsession (like many ten-year-olds) but it is not with dinosaurs, cars or aeroplanes: he endlessly catalogues boss drovers in portraits that vividly evoke the resilient, determined spirit of the rugged individuals responsible for moving thousands of livestock and teams of stockmen and cooks along the great pastoral stock routes of Australia, travelling over vast distances from station to market, or finding feed and water in times of drought.

Pene brings the individual characters of the boss drovers to life. There is Nat ‘Bluey’ Buchanan, aka ‘The Veteran’ (2363), the first to take cattle into the Kimberley, crossing Victoria River country with 4000 head of cattle to the Ord River Station in 1883, and the pioneer of the Murranji track; there is the Aboriginal boss drover Ruby De Satge (317), who drove cattle throughout Queensland, New South Wales and the Northern Territory. Granddaughter of prominent Australian pastoralist Oscar De Satge, Ruby was denied her inheritance due to her Aboriginality, and documented her encounters with many injustices against Aboriginal people in her memoirs.(1) As a young man only a few years older than his alter ego, MacPherson spent time working on the land. 1000 BOSS DROVERS… is a deeply felt weaving of interconnected stories, like the arteries of stock routes across the country, and appears simultaneously as an enormous landscape and sea of undulating faces.

The historical record tells of some more unsavoury aspects of many a boss drover’s life: newspapers note incidences of cattle stealing, assault, failure to produce stock permits, and desertion of wives.(2) Cattle thief Harry Readford, aka ‘Captain Starlight’ (2400), stole 1000 cattle from Bowen Downs Station near Longreach, Queensland, in 1870 and drove them 2400km through very difficult country, pioneering the Strzelecki Track.(3) Boss drovers Harry Wilson (685), Charlie Edmonds (196), Charlie Hall (1207) and James Stirling (2095) had documented brushes with the law, but there are also stories of redemption - William 'Bill the Fiver' Horton (2346) arrived in Australia as a British convict in 1832. A free man from 1839, he worked as a boss drover before becoming a successful publican of the luxurious Royal Bull's Head Inn at Drayton, near Toowoomba.

All the boss drovers’ names are those of real people, whose histories are known or documented. However, not all of their faces are derived from photographs or images of the actual subjects; in many cases no records are available. These drawings are therefore often imaginative; some include collaged elements taken from popular magazines: the eyes and nose of Edward Kennedy (2399) are unmistakably those of the Prince of Wales, while the nose and mouth of John Archer (2394) and the eyes of William ‘The Wild Irishman’ Cameron (2205) are taken from a photograph of the late American actor James Gandolfini. Robert Pene’s drawings memorialise the drover’s life and labour no less poetically than the jingoistic verse of AB ‘Banjo’ Paterson. The 1000 BOSS DROVERS could also be seen as a representation of the Australian landscape, but in an alternative and no less grandiose register to the nationalist paintings of Arthur Streeton and Tom Roberts.

The Pene drawings, which are each dated 14 February 1947 - the artist’s tenth birthday - form part of MacPherson’s long-running series of ‘Frog Poems’.4 This term sprang from a group of works that juxtaposed objects with the Latin names of frogs and thereby suggested in some way the frog’s characteristics. It has evolved to refer to the unreliability of descriptive systems to capture the diverse reality of their subjects. In fact, one might see 1000 BOSS DROVERS… as MacPherson’s lament for the disappearance of the specialised knowledge, language and history that these working people carried with them, but instead of Latin, we find the humorous nicknames from the Australian bush such as ‘Bluey’, ‘Paddy’ and ‘Rusty’.

Drovers have declined in numbers to the point of obsolescence in the contemporary world thanks to the B-double and B-triple road trains that now populate Australia’s rural highways. With this work, MacPherson keeps alive a very particular history. This major work, an extraordinary high point in the artist’s career, has never before been shown in its entirety. The immense ambition and scope of the project represents 20 years of thought and deliberation by the artist. The sheer scale of 1000 BOSS DROVERS… reflects Australia’s diversity, history and complexity, and it exemplifies the best of MacPherson’s work - his conceptually driven practice, his unfettered wit and larrikin edge, with a local, specific narrative at its heart.

1 Ruby de Satge, ‘I was born on the banks of the Georgina River’, in Bill Rosser, Dreamtime Nightmares: Biographies of Aborigines under the Queensland Aborigines Act, Australian Institute of Aboriginal Studies, Canberra, 1985, pp.11-64.
2 See http://trove.nla.gov.au/ndp/del/article/36900423, accessed April 2015.
3 The inscription on this drawing reads: ‘Sister, Mr Readford was also known as Mr Redford. Mr Readford was a notaurious [sic.] poddy dodger’ (a cattle thief who steals unbranded calves).
4 Other ‘Frog Poems’ relating to droving are "DRY RIVER: 20 FROG POEMS, IN MEMORY OF ALEX WILSON MASTER HORSEMAN" 1996-1998, also in QAGOMA’s Collection, and “MURRANJI: 15 FROG POEMS, A KEENING” 1996-1997, in the collection of the artist. 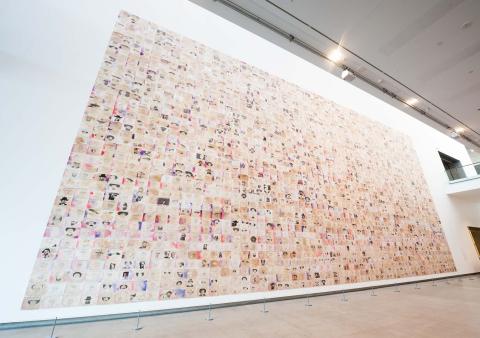