Michael Riley: An Allegory of Sacrifice

In his evocative 1993 photographic series Sacrifice, Wiradjuri/Kamilaroi artist Michael Riley mines the reservoir of Christian iconography to proffer an allegory of Indigenous sacrifice under colonisation. Riley (1960–2004) was born in Dubbo and grew up on the nearby Talbragar Reserve before settling in the bustling Sydney suburb of Redfern when he was just 16. While his artistic practice was cut short by his death at the age of 44, through it Riley intimately surveyed the experience of being an Indigenous person in Australia and was a front runner in contemporary Aboriginal art when artists began using their own voices to speak back to the prejudices of mainstream Australia. Belonging to an early powerhouse generation of Aboriginal creatives, academics and activists, Riley’s work in the 1990s reveals a deep love for his peoples, who featured frequently throughout his images.

Sacrifice is Riley’s first major conceptual photographic series. It pulls into focus the disrupting influence and economy of mission life and tells of the ‘sacrifices Aboriginal peoples made to be Christian’. In addition to the violent arms of the law, the military, and the police, British colonisation forcibly imposed Christianity on much of the Indigenous population. As early as 1822, a range of religious institutions coordinated mission efforts that expanded rapidly from around 1850 with projects across much of Australia. The ethos was simple: to spread the word of God and convert non-believers. As Riley states, ‘Aboriginal people were thrown onto reserves and missions and told not to speak their language and not to conduct ceremony or song’.

The Christian idea of sacrifice, born out of a distinction from Judaic practices, is self-directed and corporeal: it brings the body into the purview of its teachings. In his hand-toned black and white photographs, Riley frames images of the body in piercing detail, taking its sum parts to allude to a greater sacrificial whole. Across the 15 photographs, take for example the dark-skinned chest, a plunging silver necklace and crucifix pendant shining quietly against its shadowy sternum. Notice, too, the bloodied palms of dark-skinned hands, announcing stigmata. The corporeality of Riley’s images assimilates works in the series that are more indexical, of the body but not the body itself: Riley orders sardines — which symbolise the arched ichthys fish — in a strict row and against cracked earth and grass. He states that they represent the peoples of the mission who were ‘lined up and regimented’. Similarly, the small mounds of coffee, sugar and flour denote the rations of the controlled mission economy; the blurred spoons and poppies infer substance abuse; while the headstones signify the introduced marker of Christian burial tradition.

That Christianity is understood by its sacrificial tradition is from where the potency of Riley’s allegory of Indigenous sacrifice is best understood. Here, sacrifice is not one of Christian self-direction, but of mission management. It takes the Indigenous body as a sacrificial social body, where the effects of colonisation are wrought not only upon individuals but also entire communities. Wounds speak to the violent imposition of mission programs that forcibly removed children from families, dispossessed people from Country, instituted indentured labour and forbade cultural practices. Riley has stated his belief that it is under religion that Aboriginal peoples are ‘corralled and controlled’. The ‘strange concept’ that religion presents for ‘an Aboriginal kid growing up in the bush’ was what prompted him, in this series, to reflect on Christianity, the history of missions in Australia and life for Aboriginal people on those missions, for the first time. As Riley has said, the series does not intend to ‘put down’ the Christian religion, but instead seeks to reflect critically on the hypocrisy of how people have used it.

The allegory of sacrifice Riley makes in this series is tempered by the technical precision he employs in their creation and demonstrates his intimate understanding of the mechanics of photography. In 1983, Riley completed a condensed Koori photography course at the University of Sydney’s Tin Sheds gallery and workshop, and then worked as a technician in the Sydney College of the Arts’ photography department.8 The photographs in this series show the unique qualities of the once-popular cibachrome printing process, which was effectively pushed aside by the digital revolution in 2011. Artists working in fine photography favoured cibachrome prints for their sharpness and lasting quality. Riley’s tightly framed close-ups and arresting tonal play between light and shadow are a captivating example of the conceptual and aesthetic potency of this departed era of film photography. 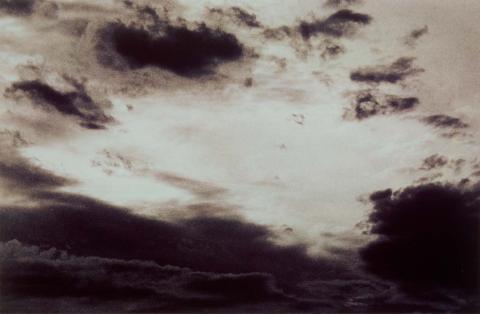