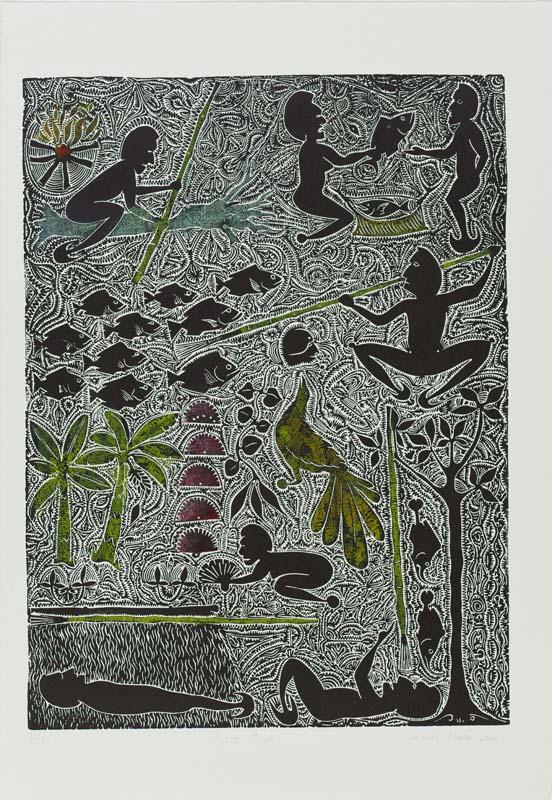 Dennis Nona was born in 1973 on Badu Island in the Torres Strait. As a young boy Nona was taught the Badu Island traditional craft of woodcarving. He completed an Associate Diploma of Art at Cairns TAFE between 1991 and 1993, and a Diploma of Visual Arts in Printmaking at the Institute of Arts, Australian National University, Canberra between 1994 and 1998. Nona's practice is primarily based on the rich narrative legends of the Torres Strait Islander people. The symbols that Nona uses - sea creatures, masks and designs - are also influenced by the art of coastal Papua, and can be found on carved drums and similar trading items. The mythical figures in Nona's prints are based on a dream vision of his traditional culture, which he experienced in 1993, his final year at Cairns TAFE. Although these images are used by traditional carvers and are not to be viewed by outsiders, the authority of Nona's vision has made him comfortable in revealing them to the broader public. Subsequently, his elders have given Nona permission to use images from these stories in his linocuts. Nona's dream visions of his traditional culture have continued. He has refined the style that he established in Canberra, and his designs have become sharper and more intricate. He feels strongly about retaining his traditional culture and hopes to pass on this heritage through his art practice. Nona describes the story of 'Puwa Pun' in the catalogue for the 2001 exhibition 'Gelam Nguzu Kazi - Dugong My Son': 'Puwa Pun had two Babath (sisters) who he relied on for fish. One day the sisters told him to make a fish spear so he could fish for himself. He decided to make it the next day. When the spear was completed he went out onto the reef when the tide was low. As a school of fish was approaching he aimed but faked the throw. He admired the spear so much [that] he would not use it. Instead he would lie under a tree admiring his spear and saying: "You are my spear, I don't want to use you or else you will become blunt". In the afternoon he went back to his sisters and asked them for fish. During the night he took his precious spear and put it between the weaving of his hut so that while he slept he could look [at it] and admire it. Puwa Pun eventually turned into a bird that is still found on the island today.'(1) The spear's central importance to the story is clear in Nona's print, as it is shown four times. The sequence of the story, as depicted, largely follows the direction established by the spears, before terminating in the bottom left corner of the print. Although the bird at the centre of the print is effectively the end of the story, it appears unconnected to the activity around it. The relationship of the woman planting her garden to the story is not known, but growing taro is as important an activity as fishing for the communities of the Torres Straits Islands. Essay by Caroline Geesu, Curatorial Intern (Pacific Art), Nov. 2002. 1. Alfonso, Cecilia and Kershaw, Michael (eds). 'Gelam Nguzu Kazi - Dugong My Son'. Kubin Community Council, Mua Island, 2001, p.18. 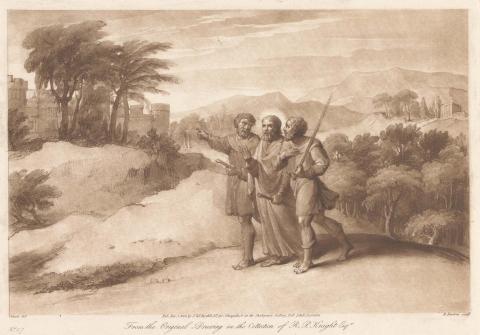 Sepia-toned print from a drawing in the collection of R.P. Knight 1803 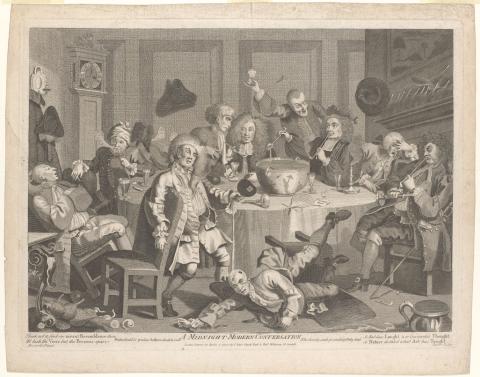 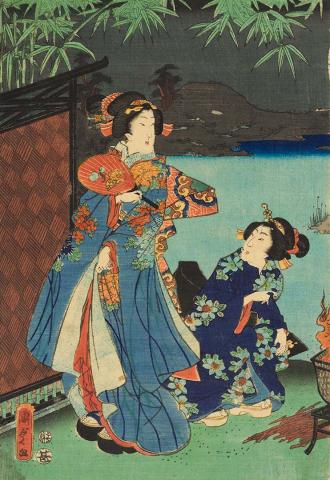 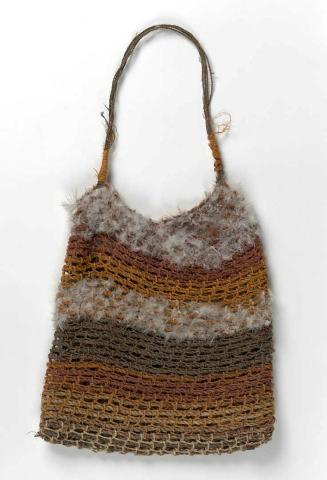 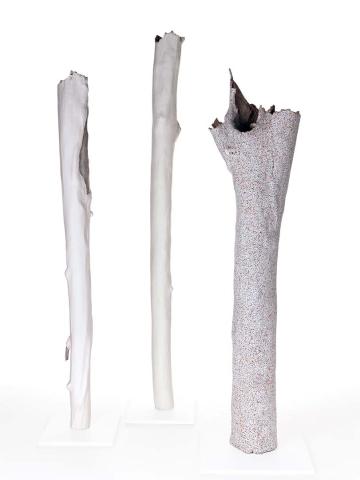