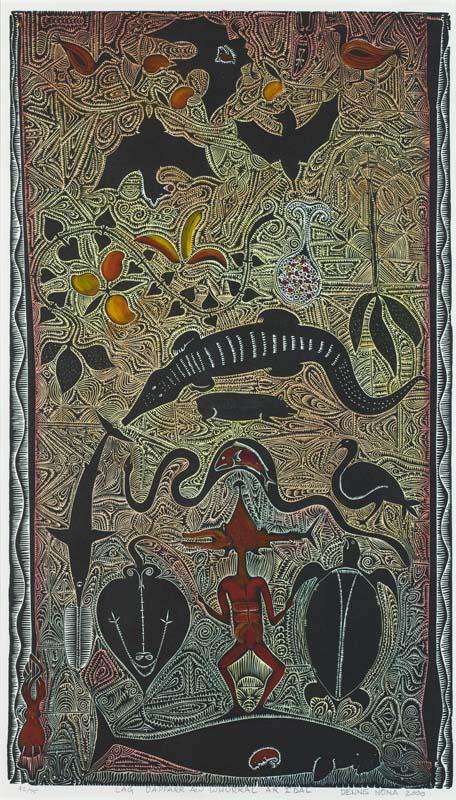 For biographical and background information see Acc. no. 2002.103 'Additional information'. The story of 'Malu lag a dapar - A urungu aidal' is described in the catalogue for the exhibition 'Gelam Nguzu Kazi - Dugong My Son': 'This print shows the interconnectedness of the different creatures of the sea, land and air that inhabit the Torres Strait Islands. The man standing at the bottom centre of the print is holding the tail of the stingray and the flipper of the turtle to represent how connected and dependant (sic) humans are on the animal world. He is wearing a crocodile and shark mask which is used in funeral ceremonies on Western islands. He is standing on a pregnant dugong which is very fat and highly prized. The geese portrayed come to the islands during migration each December and are the most favoured eating birds of the area. The snake (Tabu), is the artist's father's totem. The sword shark, octopus, crocodile, pig, dugong, turtle, stingray and bat are all important totems of the different villages throughout the islands. The centre section represents the coastal area where pigs roam the mud flats and are often taken by crocodiles as a delicacy. Above the crocodile, the wild bush vegetables depicted: sweet potato, mango, banana, wild berries and cassava are are all important in the diet of the islanders, providing them with protein and energy. At the top of the print is the canopy of trees where flying foxes and Seserre birds, similar to willy-wagtails, are eating mangoes and mangrove fruits. Shown on either side of the print is the harpoon used for spearing turtles and dugongs. The bamboo spear is used to catch octopus and fish. The patterns in the background represent marine life and the teeth of the crocodile and shark.'(1) Essay by Caroline Geesu, Curatorial Intern (Pacific Art), May 2002. 1. Alfonso, Cecilia and Kershaw, Michael (eds). 'Gelam Nguzu Kazi - Dugong My Son'. Kubin Community Council, Mua Island, 2001, p.26. 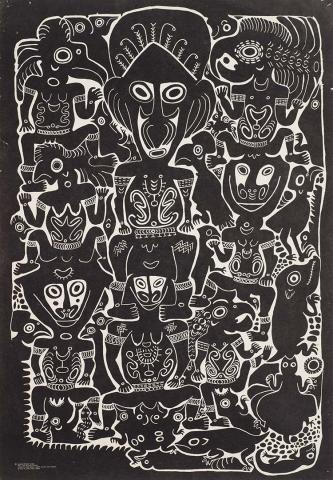 Mountainous landscape with a village in the distance late 16th century 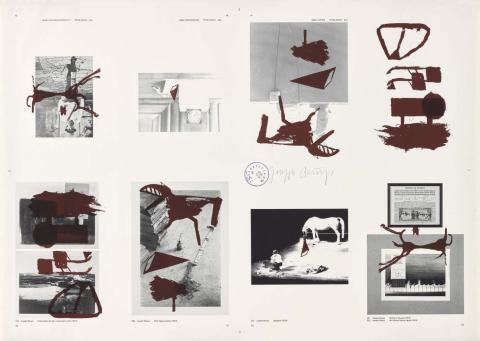 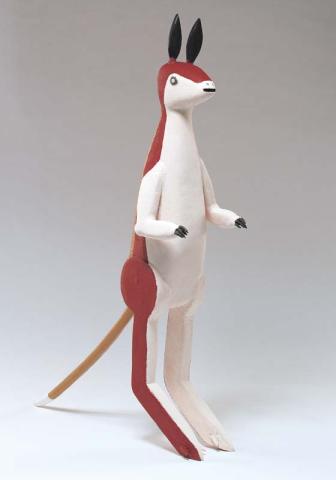