In memory of the unknown artist: Japanese fabric 2, ochre 2000

For biographical information see Acc. no. 1993.275 'Additional information'. Throughout her career Vivienne Binns has made a serious study of art forms associated with women, especially women's crafts. She has persistently worked across many media, exploring the heterogeneity of these cultural practices, and she continues to celebrate in her current work the diversity of cultural and stylistic influences she has experienced in her life as an artist and as a traveller. The title of this work, 'In memory of the unknown artist: Japanese fabric 2, ochre', explicitly acknowledges Binns's great enthusiasm for the beautiful patterns developed collaboratively over time in many craft practices. This is not a matter of mere aesthetic preference: the artist is particulary interested in the notion that creativity is widely dispersed throughout diverse populations and communities, and that it is expressed in a variety of cultural practices which are not always recognised, and certainly not given the exalted status of 'high art'. In December 1999 Binns wrote in the notes accompanying her exhibition at Bellas Gallery, Brisbane: 'The Japanese fabric or the painting of that name, would be assessed, perhaps, as fine art fabric, the knee rug as cottage craft, the tissue box cover as commercially generated kitsch-craft and the lino as industrially produced domestic design. Until recent times and even today these objects might only be seen together in an opp-shop or an ecclectic domestic setting without high art style or "good taste". My life as an artist has been concerned with questions such as; What is this thing called art and what does it mean for humans? What is the importance of making art, to humans - all humans? Why are there things, made by humans which are called "art" by some and something else by others? How are art values arrived at? My art practice of more than 30 years has approached these questions from a number of directions and in a variety of ways.' This painting is the second of a series of three based on a piece of found, patterned Japanese silk. This silk is intriguing, given that its pattern suggests the ochred ground paintings of Australian Indigenous artists from the Central Desert, the so-called 'Dot paintings'. Binns delights in such cultural complications, since she attempts in her practice to embrace the totality of artistic influences on her work, not only from the usual European canon but also from Asian and Pacific cultures, and from the crafts and community arts. Binns works as a kind of an artistic litmus test, registering the broad variety of these artistic and cultural 'patterns' in her work. As a tribute to the (now) anonymous designer of this cloth, Binns has effected a 'translation' of the design into paint. 'Translations' was in fact the title of Binns's 1999 exhibition at Bellas Gallery, Brisbane, in which a number of paintings reproduced the patterns, colours and textures of familiar, even canonical, Australian popular culture objects. These included a tissue box cover, a woollen crocheted knee rug, and 'lino from the kitchen floor at Lawson NSW', a house in the Blue Mountains outside Sydney where Binns lived for some years. The choice of the word 'translations' is revealing. Binns is interested in cross-cultural dialogue and understanding; here she has chosen a Japanese fabric, but she has also worked with Pacific Tapa patterns. The extraordinary surfaces of these works also suggest the notion of translation, perhaps even transliteration. The paintings resemble their original sources so closely as to be almost uncanny. The appropriation art of the 1980s and 1990s borrowed the appearance of objects but with these paintings, calling on the resources of her painter's craft, Binns transcends the mimicry of this practice, seeming almost to inhabit the interior substance, and the past secret life, of the objects she has chosen. Julie Ewington, Head of Australian Art, June 2001. 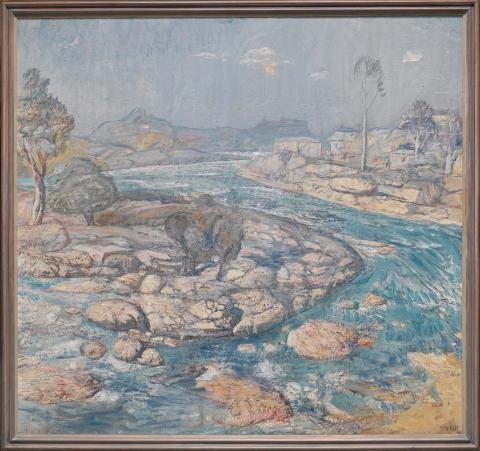 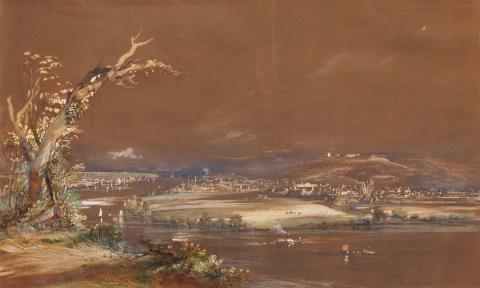 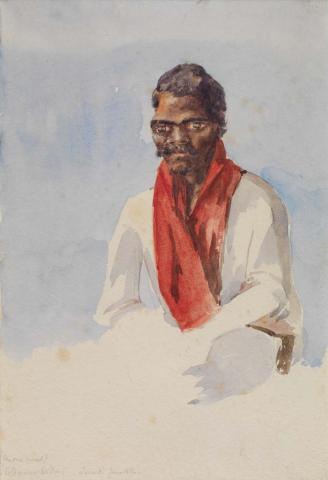 The one cured, Collanawhalla, Lanark (unfinished) 1884 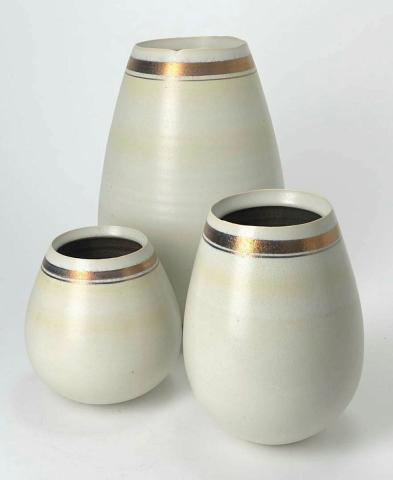 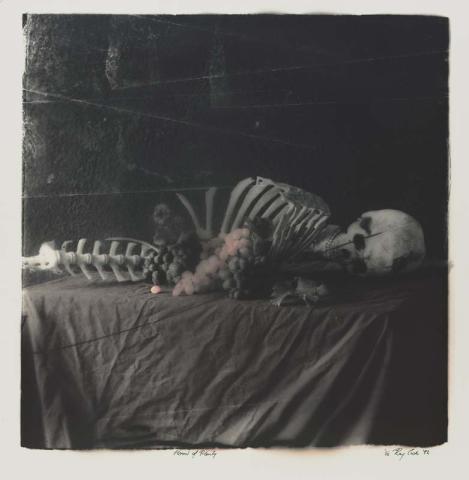 Sheila Giles, given the gift of healing, Brisbane (from 'Journeys north' portfolio) 1986-87