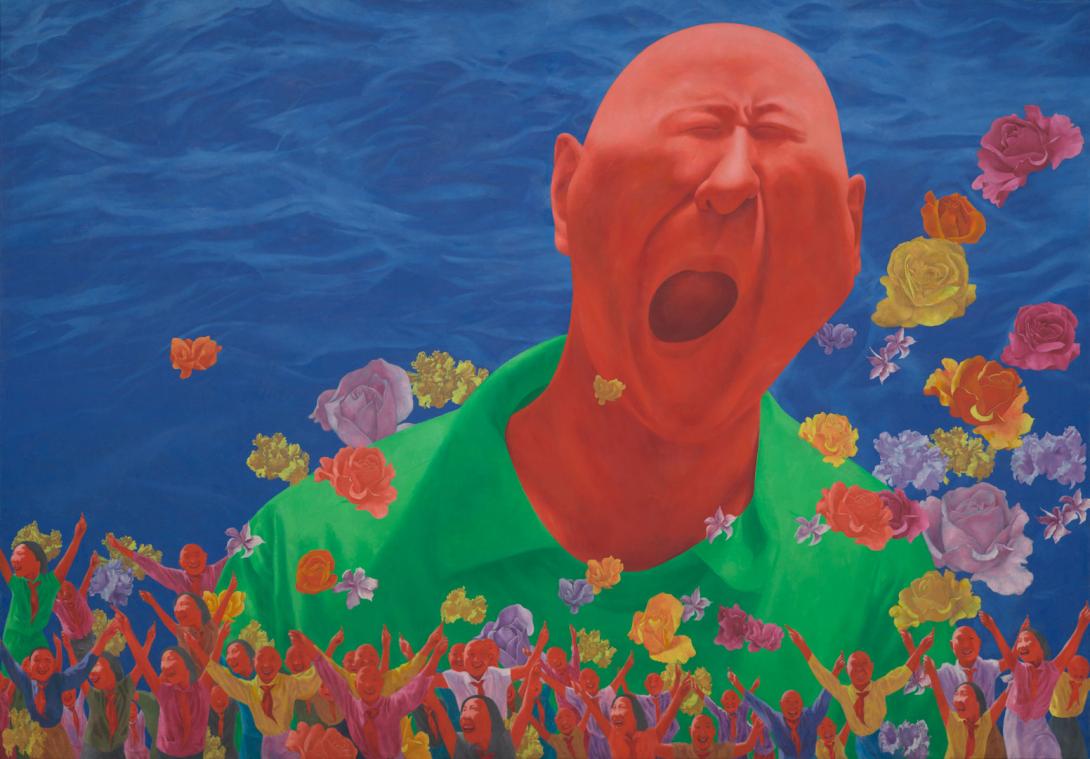 Born in 1963 in Handan, Hebei Province, Fang Lijun's childhood was dominated by the Cultural Revolution, and the paintings, for which he has become well known, draw directly on his experiences of this decade. Fang Lijun's family was classified as rich peasants, and many attacks and denunciations were directed at his grandfather. To distract his son from the hardship of this period, Fang Lijun's father arranged for his son to be taught painting at home. In 1977 Fang Lijun entered the fine arts group at the Workers Cultural Palace, where he met teachers, Zhang Yichun and Zhen Jindong. Through Zhen Jindong he came into contact with Li Xianting, the influential art historian and curator. In 1985 Fang Lijun moved to Beijing and studied at the Central Academy of Fine Art, graduating in 1990. In 1988 he began painting and drawing the shaved headed figures which populate his work and the following year participated in the seminal exhibition 'China/Avant-Garde' at the National Art Gallery, Beijing.

The painting 980810 features Fang Lijun's characteristic figures. Dominating the central expanse of this large canvas is the image of a male with a shaved head, yawning widely; this gesture is accentuated by Fang Lijun's use of colour. The man is red, a colour associated with China's communist revolution: the yawn suggests a grimace that hovers and colours the reading of the flowers and figures that occupy the rest of the canvas.

Scattered across the picture plane are brightly coloured roses, chrysanthemums and oleander blossoms that sail out of the sky and beneath these, lined up across the bottom edge of the composition, are miniature figures that smile and wave. The blossoms are rootless and stemless, ungrounded in this world, but full of symbolism from the past. They are also reminiscent of Chairman Mao's dictum 'Let a thousand flowers bloom. Let a thousand schools of thought contend'. The background consists of an ambiguous blue sea/sky: it could be a sea which rolls and rises with the motion of the swell, or a sky that appears crushed and creased.

Fang Lijun is the foremost painter of his generation of artists that propelled a style called 'Cynical Realism' into the forefront of Chinese contemporary painting in the 1990s. Cynical Realism celebrates the very detail of mundane daily existence that is overlooked and bypassed by any kind of idealised orthodox state art. In 980810 Fang Lijun extends this scale from larger than life to telescope and magnify this detail in an eruption of colour.

The term 'rogue humour' appropriately describes this work. Being victimised as a member of the 'wrong class' instilled in Fang Lijun a deep cynicism about ideology. For Fang Lijun, the individual is ultimately a lone figure morally disempowered and forced to act out false gestures. He relates as an example, an incident in which he was compelled to weep in public at the news of the death of Mao. His peers praised his hysterical response. It is this sense of facade that is translated into the multitude of smiling faces in 980810. His own inevitable participation is encapsulated in the self-portraiture that is linked to the smoothly shaved central figure.

When translated into Chinese, the phrase 'rogue humour' incorporates cynicism as intrinsic to its meaning. So while this painting is colourful and enjoys its associations with play, it also belies the realities of daily life in China post-1989 (marked and transformed by the Tiananmen Square protests). As with many of Fang Lijun's paintings, the shaved-headed figure suggests a self-portrait. In China a shaved head is 'a sign of individuality but is also associated with the lout, the rogue, or some negative character'.(1) Thus, by using himself as the subject of his painting, his cynicism is directed at himself as much as extending its metaphoric domain to include the larger community. And his critique 'plays' with self-parody, just as in his childhood he 'played' with those same children who would instigate the public torment of mass denunciations against his family. These contradictions, of high pitched joyous colour which depicts the artificiality of communal celebration; and of the central character who is both bored thug as well as self-interested artist, characterise Fang Lijun's paintings and offer complex levels of understanding. The painting derives its title from the date of completion: the year, the month and the day. This pointed serialisation of his titles suggests the endless and repetitive nature of his work, as well as its mundane associations.

This painting of a yawning, shaven-headed man appearing behind an inexplicably jubilant crowd is emblematic of the style dubbed Cynical Realism by critics, which parodies state-sanctioned Socialist Realism to depict ‘the absurd, the mundane and the meaningless events of everyday life’. Scattered across the picture surface are brightly coloured roses, chrysanthemums and oleander blossoms that sail out of the sky, detached from their roots, while also recalling Mao Zedong’s Hundred Flowers campaign (1956–57), an experiment in free expression that was quickly quashed. In a society he considers full of political, social and cultural contradiction, Fang is disparaging of idealism. His characters are self-portraits, multiplied to the point of anonymity by diminishing differences in age, status and gender. The title of the work, 980810, provides its completion date – a vague and inconsequential reference that deliberately points to the mundane and repetitive.