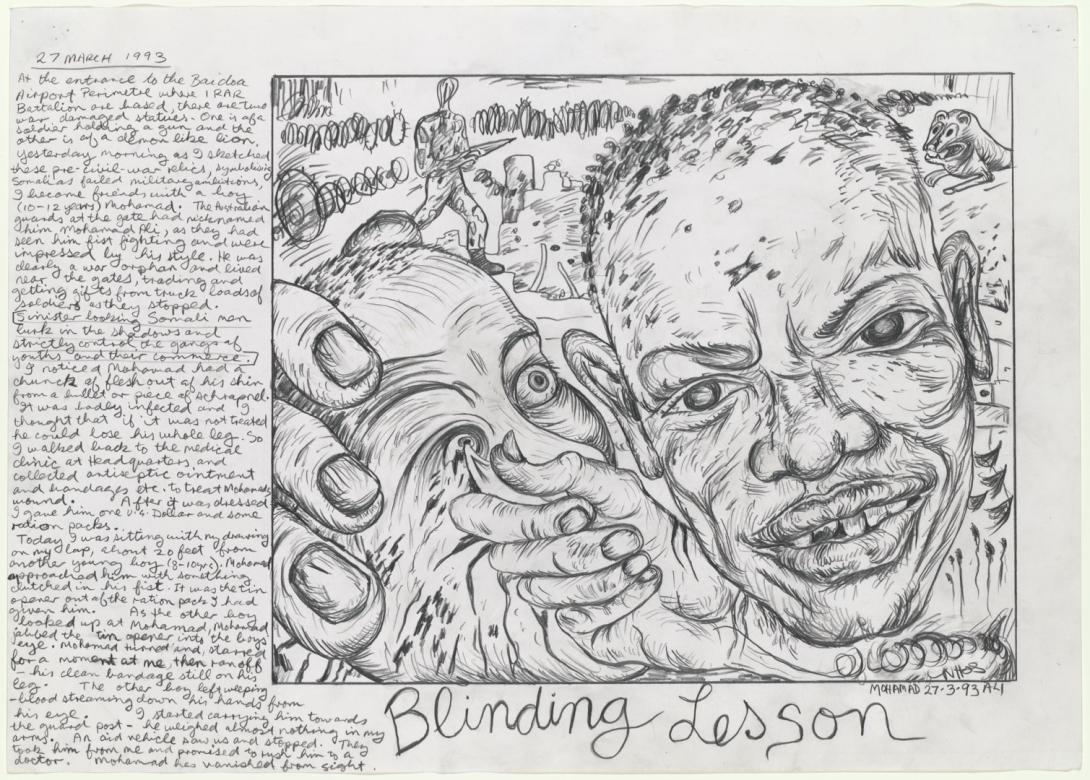 Born in Sydney in 1949, George Gittoes commenced studying Fine Arts at the University of Sydney in 1968 before moving to New York in 1968-69. Whilst in New York he studied at the Arts Students League under Joe Delaney, studying art history and major public art collections extensively. He returned to Australia late in 1969 and co-founded the Yellow House at Potts Point, New South Wales with Martin Sharp. This gallery/co-op for young avant-garde artists acted as a nucleus for Gittoes' art activities, the 'Green book' (no. 2 from 'Green book' series) 1971 in the Gallery's Collection dates from this period. A multi-talented artist, in 1977 Gittoes won awards at the Sydney and Melbourne film festivals for his first film 'Rainbow way', and was involved in other films of critical acclaim as well as various performance pieces throughout the 1980s. Gittoes has travelled extensively around the world. His appointment as peace keeping artist to the Australian Army in 1993 resulted in this series of documentary drawings of Cambodia and Somalia. Winning the Wynne Prize, Art Gallery of New South Wales, in 1993, Gittoes continued his peace keeping activities into 1994, travelling to Western Sahara, Algeria, Sinai, Israel and Southern Lebanon with the Australian Peace Keeping Forces. This series of drawings documenting the people of Cambodia and Somalia (Acc. nos 1998.062-067) operates on a much deeper level than the purely visual. They are socio-political comments on the way of life for such people living with the destructive and disastrous effects of war. Gittoes takes the viewer 'behind the scenes' of the Australian Peace Keeping efforts, showing areas of human experience not often covered by the mainstream media. By focusing on the local men, women, and children of these areas he creates an awareness of the direct interaction of the Australian soldiers with the civilian population which is the basis for understanding the background and rational for the presence of Peace Keeping Forces. Far from presenting these images as voyeuristic or sensational, Gittoes, in portraying the realities of individual suffering, captures instances of courage, resilience and tremendous strength of spirit. The artist gives a voice to the forgotten multitude that live with the casualties of war and are surrounded by constant conflict. The American art critic, Robert Berlind, says of Gittoes work: "...when so much art professes concern for those without a public voice or recognition, most often doing so through deconstructivist tactics... opaque to all but the initiated, Gittoes direct contact and reportorial veracity is especially effective."(1) It is the genuine human interaction evident in these drawings by Gittoes that gives them such a powerful resonance. Each drawing consists of an accompanying text, written by Gittoes at the time of the drawing, telling the individual's story and the artist's own experience with his subject. These drawings, in their direct and emotive portrayal of ordinary people caught in the struggle for survival, force us to see the human face that lies behind the events presented to us by the mass media. (1) Quoted by Deborah Hart in 'The realism of peace: George Gittoes'. Museum and Art Gallery of the Northern Territory, Darwin, 1995, p.15. The following commentary written by the artist forms an integral part of the composition: At the entrance to the Baidoa Airport Perimeter where 1RAR Battalion are based, there are two war damaged statues. One is of a soldier holding a gun and the other is of a demon-like lion. Yesterday morning as I sketched these pre-civil war relics, symbolising Somalia's failed military ambitions, I became friends with a boy (10-12 years) Mohammed. The Australian guards at the gate had nicknamed him Mohammed Ali, as they had seen him fist fighting and were impressed by his style. He was clearly a war orphan and lived near the gates, trading and getting gifts from truck loads of soldiers as they stopped. Sinister looking Somali men lurk in the shadows and strictly control the gangs of youths and their commerce. I noticed Mohammed had a chunk of flesh out of his shin, from a bullet or piece of shrapnel. It was badly infected and I thought that if it was not treated he could lose whole leg. So I walked back to the medical clinic at Headquarters and collected antiseptic ointment and bandages etc. to treat Mohammed's wound. After it was dressed I gave him one US dollar and some ration packs. Today I was sitting with my drawing on my lap, about 20 feet from another young boy (8-10 yrs). Mohammed approached him with something clutched in his fist. It was the tin opener out of the ration pack I had given him. As the other boy looked up at Mohammed, Mohammed jabbed the tin opener into the boy's eye. Mohammed turned and stared for a moment at me, then ran off - his clean bandage still on his leg. The other boy left weeping - blood streaming down his hands from his eye. I started carrying him towards the guard post - he weighed almost nothing in my arms. An aid vehicle saw us and stopped. They took him from me and promised to rush him to a doctor. Mohammed has vanished from sight. 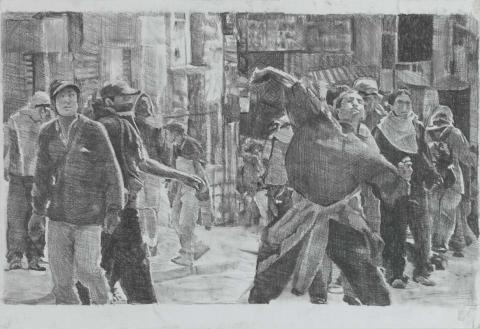 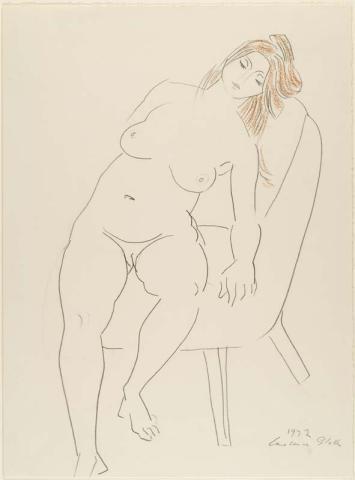 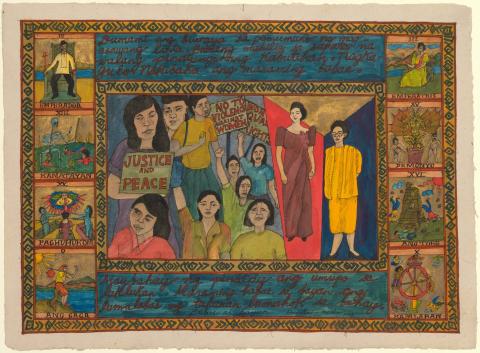 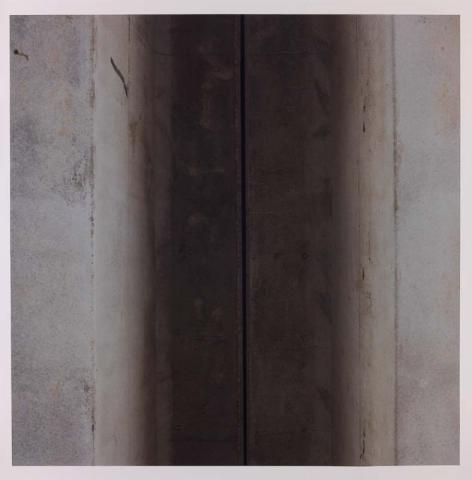 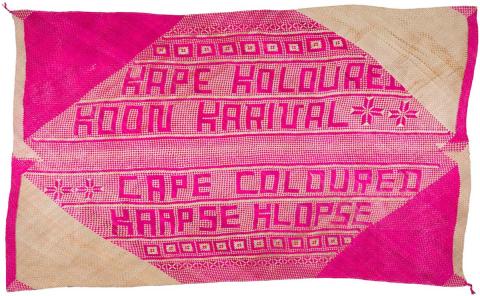 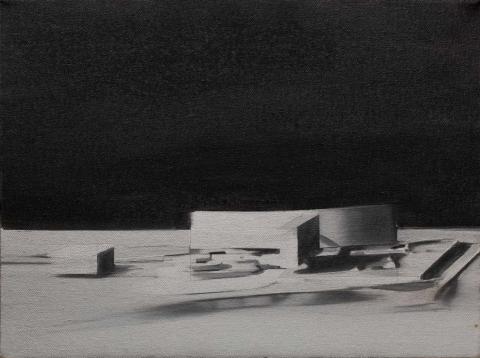