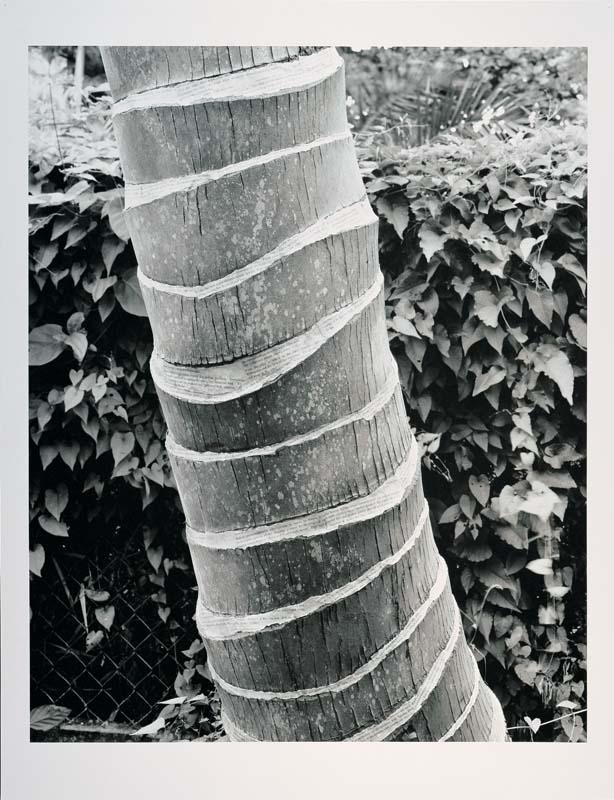 In Forest (portfolio), printed in 1998 and made on location in Singapore and Port Dickson, Malaysia, Simryn Gill uses fragments of texts which have been cut and incorporated into foliage featured in the works. Each photograph shows different plants, sometimes roots, in locations that are generally abandoned. These are not formal garden settings where plants and trees have been selected and carefully tended, but diverse locations such as an abandoned Chinese towkay bungalow, the beach side in Port Dickson, a disused army reserve, road side locations, and an army housing estate in Singapore. Placed among the foliage are fragments of texts taken from a selection of books. Echoing the shapes of leaves, flowers and roots, the pages of texts are meticulously cut, stuck and incorporated into the chosen sites. Using a diverse array of books, such as a Chinese cook book, the Ramayana, Lord Jim, Robinson Crusoe, The Origin of Species, Frankenstein, a fragment from a book about the Japanese and the war, the texts are inserted into nature: they are like clues to a strange puzzle. Such an eccentric collection of books indicates a cultural moment in a particular place as much as it indicates a very personal pleasure in eclectic reading material. In this kind of conjuncture Gill explores her mixed cultural baggage enabling the critique of elements of a post-colonial heritage while also expressing a pleasure in some of the repercussions of that very history. The ambiguity of meaning in the meeting of these sometimes quite contradictory elements is as much a part of this position as is her delight in creating and exploring these tensions.

This work also explores the interface and tension that exists between human culture and nature. Once inserted among the foliage and photographed, the pieces of text were left in situ for time to take its course: the strips and fragments eventually disintegrated. The photographs work as documents which fictionalize a moment and location in an object which now assumes memory. The knowledge that the 'cultural' component of these photographs, the paper, is destined to decompose literally means that the photograph works as a document of an invisible ephemeral installation, made over time and geography.

This work by Gill was first conceived for a project for the city of Yokohama. The images were presented in bus shelters and were intended to be printed on clear mylar sheets, thereby working as a form of veiling of the glass in the shelters, inserting a filigreed, tropical landscape between the city and the space of the shelter. However, the project was not realized in this form, but rather as a group of smaller posters. This particular set of photographs sees Gill printing the images in the scale first envisaged, large enough so that fragments of the texts are legible, mirroring the actual print size. These details play a vital role in deciphering Forest. The ability to access these fragments is an important part of the impact of these photographs.