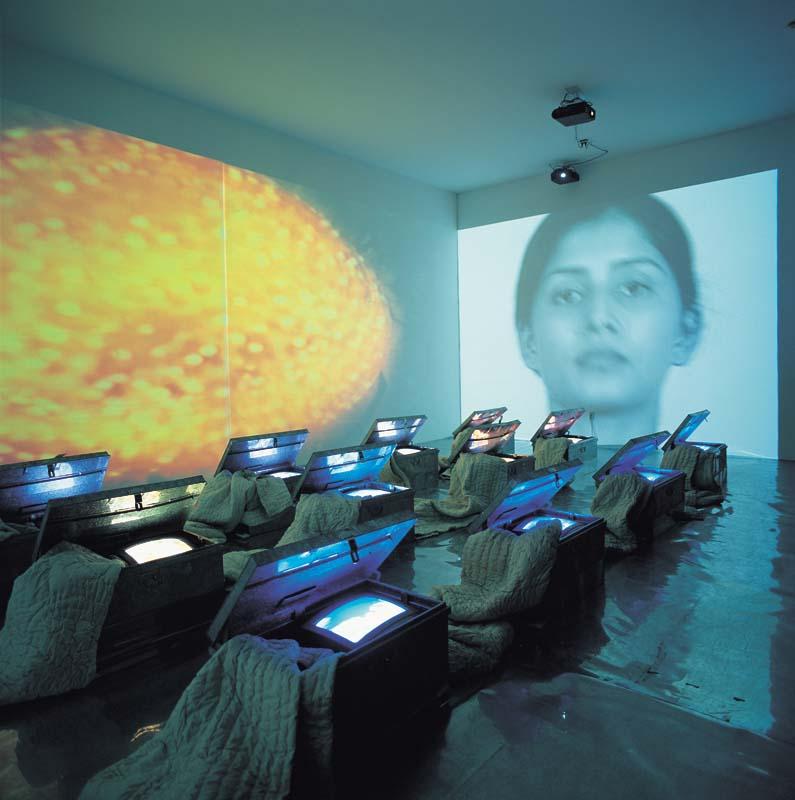 Nalini Malani was born in 1946 in Karachi, a year before the preparation of India's independence from British colonial rule and the year of Partition, the splitting of the nation along religious lines into India and Pakistan (East and West). A time that witnessed the mass fleeing of Hindus to India and Muslims to Pakistan. Malani's family was among those who fled Karachi and settled in Calcutta. Malani moved to Mumbai in 1964 and set up a studio at the Bhulabhai Memorial Institute while studying at the Sir Jamshedjee Jeejeebhoy School of Art, from which she graduated with a diploma in Fine Arts in 1969.

Nalini Malani is a versatile artist; her practice is primarily drawing based but also includes performance, installation, video and collaborations with visual and performance artists. Malani belongs to a generation of contemporary Indian practitioners embedded in a sophisticated post-colonial Indian art world that is acutely conscious of the complexities of the international art circuits. Her drawing practice ranges from concertina books and artist's books that explore immediate environments to large murals that are the visual components of performance works. Deeply committed to environmental issues and the histories of degradation, some brought on by colonialism, Malani is an artist whose work incorporates wide political issues.

Her ambitious video installation Remembering Toba Tek Singh was made for the 16th World Wide Video Festival in The Netherlands and was shown in Mumbai at the Prince of Wales Museum in 1998. It was exhibited as part of 'Voiceovers' at the Art Gallery of New South Wales in 1999 and later at the Kwangju Biennale in South Korea.

Of the numerous visual icons that might be considered as belonging solely to the twentieth century, the image of the nuclear mushroom cloud must surely be one of the most powerful contenders. The macabre beauty of the explosion of a nuclear bomb has indelibly marked our living memory and changed, fundamentally, global political frameworks. Nalini Malani's Remembering Toba Tek Singh uses footage of the nuclear explosions at Hiroshima and Nagasaki in Japan in the closing throes of World War Two. It is the central projected image on the walls of the installed space. There are four other projected videos, which are seen on either side of the mushroom cloud. The first two feature Malani's 'Mutant' drawings, now animated as a filmic montage of figures that melt and reform. They resonate alongside the nuclear blast as reminders of the physical consequences of the hidden poison of nuclear radiation. The other two projections are to be viewed as facing each other on two opposite walls. They show two women attempting to fold a sari, an act that is doomed because of the unbridgeable gap of real space that separates them. On the floor are 12 video monitors which include footage of birth, death and exodus as montages. Drawing these images together is the voice over tape, which includes the story Remembering Toba Tek Singh. This narrative was written by Sadat Hasan Manto, a Pakistani writer, whose powerful satire is set in the aftermath of Partition when India and Pakistan began to oversee the process of dividing up what were once a single nation's goods and assets. Apart from the migration of between 12 and 14 million people in which at least half a million people lost their lives, Partition also resulted in the swapping of Hindu and Muslim patients, including those with psychiatric illnesses. The story Remembering Toba Tek Singh is about one of these patients, Bishen Singh, who refuses to be transferred to India because he is sure that his village, Toba Tek Singh, is in what became Pakistan. Due to Bishen Singh's recalcitrant behaviour he is forcibly moved and during his journey falls into the no-man's land between Pakistan and India, where he dies. The sad irony of this story revolves around Bishen Singh's futile hope that his reality would be understood yet is upstaged by the insanity that is part and parcel of Partition.

This installation by Malani uses the symbolic resonance of that strip of no-man's land on which Bishen Singh dies. A parallel space lies between the two women who are trying to fold the sari and in how the invisible yet lethal rays resulting from nuclear explosion affect the environment causing the mutation of human life. This work has an added poignancy because it was made very soon after India and Pakistan entered the nuclear race and each exploded nuclear warheads, in 1998. Another ironic footnote in this exchange of nuclear showmanship was India's decision to explode its warhead on the day that the Buddha's death is marked. The testing was described as 'The Buddha has reached nirvana'. Malani's installation is thus inflected with how we might consider notions of annihilation, existence and the spiritual release, liberation and enlightenment associated with the term 'nirvana'.