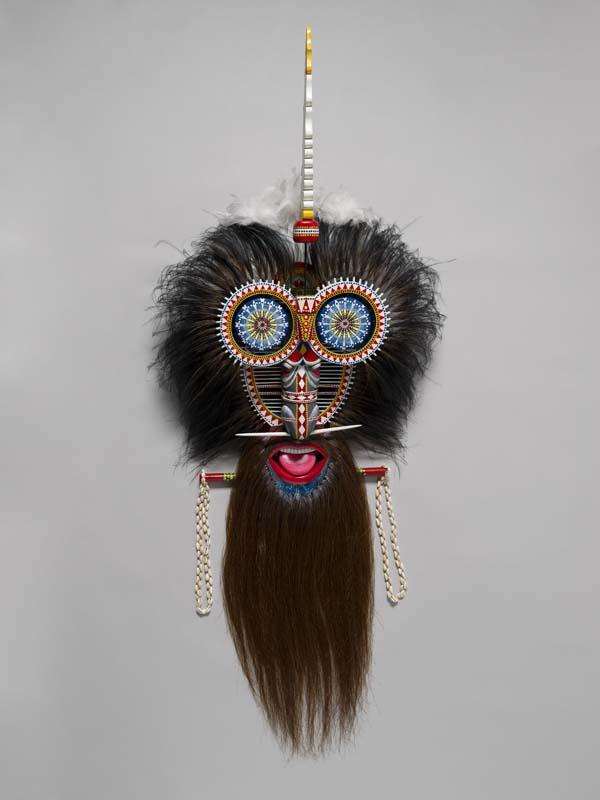 Allson Edrick Tabuai was born on Saibai Island in the Torres Strait in 1932. He is a highly respected member of the Ait Kadal clan in the Kalaw Kawaw Ya language group. Tabuai was raised in a family that maintained language, ceremonial knowledge and traditional dance. From an early age his second father, Waria Waia, taught him traditional songs, dances and stories. As the artist explains, 'Everything in his experience he gave from the sky down to the sea . . . all about the seasons and hunting'.(1) Tabuai developed a passion for exploring the innate possibilities of natural materials and mastered wood carving. By the age of seventeen he was building wooden dinghies for the pearling industry. After leaving Saibai, Tabuai worked on a lugger, diving for trochus shells, before joining a railway fettling gang. He later settled in Mackay and became Assistant Foreman on the railway reconstruction project from Townsville to Mt Isa. Following this, he took up work at industrial plants in Brisbane but recognised a need to return to his homeland in Saibai. Tabuai's experiences gave him the opportunity to compare the lifestyles of mainland Australia and Saibai and he subsequently made a decision to move his family to Cairns in the 1970s. Here he occasionally performed at family tombstone openings and at the annual 'Coming of the Light' festival which celebrates the arrival of the first missionaries on Erub in the Torres Strait in 1871. Tabuai came to be recognised for his innovative choreography and dance accoutrements, which he made using a combination of traditional and contemporary materials. He continued to develop these, along with his spectacular dance troupe 'Suruil Tituil' (shooting star), which performed regularly at Kewarra Beach resort near Cairns from when it first opened in 1985. The group was immensely popular and appearances followed at the Adelaide Grand Prix in 1986 and 1987, at the Riverstage opening in Brisbane in 1988 and internationally on a BBC TV production, 'Whicker's World'. During evening performances dramatic light and shadow effects, rapid costume changes and the swift movements of the dancers made for exciting, popular shows. Traditional Saibai themes were originally the main inspiration for his choreography, but as these became more and more innovative, Saibai elders were sometimes critical of these changes and resisted their introduction. Lindsay Wilson (deceased) who extensively researched and depicted Torres Strait material culture in meticulous detail, wrote: 'Edrick Tabuai is a consummate artist-craftsman. His understanding of the visually spectacular is instinctive, yet his artefacts are, above all, functional and superbly designed for his rigorous style of dance and the venues where his dancers perform.'(2) Though Tabuai is not now actively performing, dance continues to inform his visual art practice and his spectacular headdresses are always made with the possibility of being worn in dance. Tabuai has exhibited in 'Carried Lightly' at the Perc Tucker Regional Gallery in Townsville (1998), 'Spinifex Runner', Campbelltown Bi-centennial Art Gallery, NSW (1999) and 'Ilan Pasin', a touring exhibition originating from Cairns Regional Gallery (2000-01). He is represented in the collections of Cairns Regional Gallery, Perc Tucker Regional Gallery, Campbelltown Bi-centennial Art Gallery, Queensland Museum and Queensland Art Gallery. This dance mask, 'Wene-Wenel/Gauguau Mawa', is part of ritual regalia worn by 'Mabaig', a powerful man chosen to perform the duties of witchdoctor during traditional warfare. The carved wooden sagaia (representing a white heron feather) at the top of the mask extends from an arc of cassowary feathers which sway vigorously with the dancer's movements. The carved wooden nose and tongue, are prominent and brightly coloured, and confront the viewer with the intention of engendering fear. Tabuai described the witchdoctor's traditional role: 'As the sun rises at the beginning of the day the warrior witch doctor turns his back towards the sun to look for his shadow. From this he can see the signs from the dead spirits. As the sun sets the warrior witchdoctor looks toward the western horizon where the evening clouds gather together and form the shape of the dead spirits. Then the warrior witchdoctor talks to the Saibai Island chief. "This is a good sign, we must fight."'(3) He also commented: 'When warriors get an arrow in their flesh, the warrior man Mabaig would suck the blood out, chanting "Give me power, give me power". He jumps and sings out, lifts up the traditional string bag containing bone relics and shakes the "Wene- wenel" (dance rattle). At these times he's like lightning and thunder as he dances around, pulls the arrow out and sucks the poisonous blood calling "You're alive, you're alive, now you'll live to fight another day", then he passes onto the next victim.'(4) In recent years Allson Edrick Tabuai has not enjoyed good health, as I wrote to the Gallery in 2001. In 1999 he suffered several strokes which left him unable to walk easily or use his right hand. Over the following 12 months he worked hard to overcome this adversity. Through building up muscle strength by exercise and working using his mouth and left hand he has created this magnificent piece. For anyone close to him this effort has been an inspiration. It is a measure of his strength of character and commitment to preserving and furthering important aspects of his cultural life.(5) Essay by Diane Moon, Associate Curator, Indigenous Fibre Art, Feb. 2004. 1. Tabuai, Allson Edrick, conversation with Diane Moon, Cairns, Queensland, June 2003. 2. Wilson, Lindsay. 'Kerkar Lu: Contemporary artefacts of the Torres Strait Islanders'. Department of Education, Brisbane, 1993, p.30. 3. Information supplied by Diane Moon, 1 Oct. 2001, Artist's file, QAG Library. 4. Tabuai, Allson Edrick, conversation with Diane Moon, Cairns, Queensland, July 2002. 5. Moon, Diane. From letter to Julie Ewington, 16 Oct. 2001. Artist's file, QAG Library. 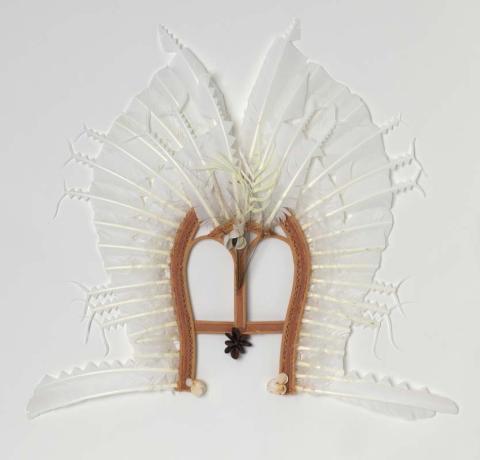 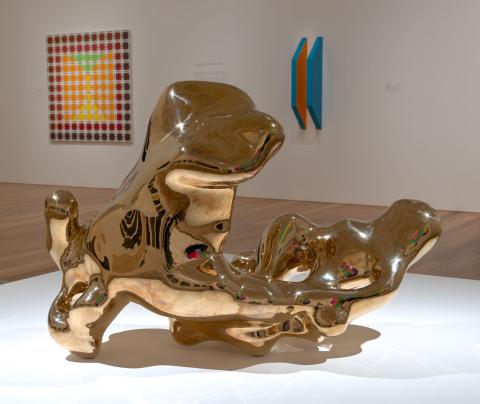 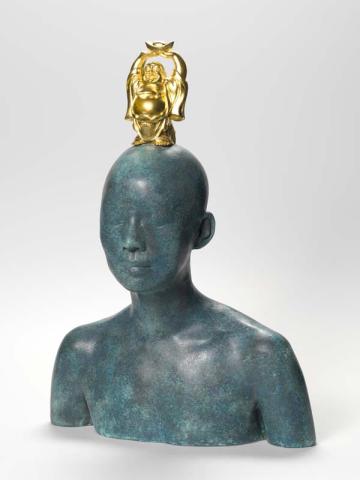 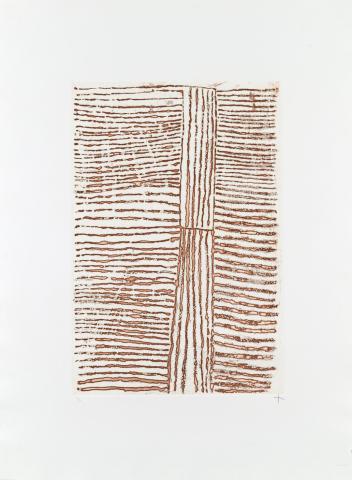 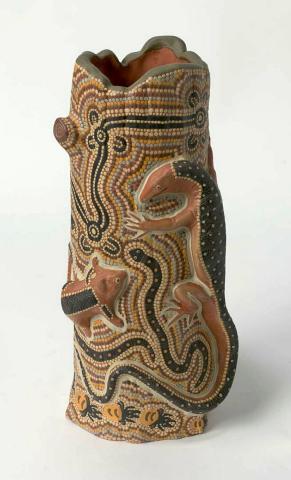 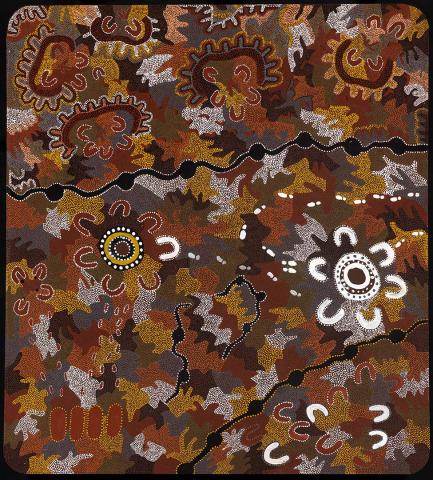