George Baselitz (born 1938) was trained in East Germany and moved to the West permanently in the late 1950s. Since then he has established a major international reputation. Since the death of Joseph Beuys he is one of Germany's best-known artist, along with Richter and Kiefer. While he has been called the 'painter-prince' of recent German art he is, nonetheless, a controversial artist. He is represented in most major world collections and has been the subject of significant retrospective exhibitions, not only in Germany, but abroad, including a forthcoming major retrospective planned for the United States. 'Im Wald' reflects themes and images which have dominated Baselitz's art since the late 50s and early 60s. It is a powerful expressionist work in which the sheer lyricism, assurance and vigour of the paint handling forcibly arrests the attention of the viewer. It is a complex and intense work, operating on several levels: the painterly, the purely aesthetic, the philosophical and the psychological. Like all of Baselitz's paintings, 'Im Wald' is resonant with paradox. It is a painting about the nature of painting, yet it evokes emotions, images and associations which gradually reveal themselves as we engage with the work. Kevin Power writes of 'Im Wald' and its related work 'Lamento': 'Both throw up the initial proposition of face or figure in the centre of the work, but then abandon them before the sheer presence of colour. The spray pattern might be read as a metaphor for tears or trees, but once again it is above all imposition of a loose order. It seizes hold of what lies underneath, unearths its tension. These two works remind one of the delicacy of Philip Guston's early work. The undergrowth is full of whispers as Baselitz survives the selves that he has remembered. The physical traces so dramatically present in these works are reminiscent of Jackson Pollock. The differences are, of course, radical, both in terms of the spatial preoccupations and the underlying aesthetic concerns. But what partially validates the comparison is the way the two artists make the body actor - Pollock with his centripetal dance and Baselitz with a more stubborn, more decisive, and definitely less surface orientated physicality. Pollock was dramatically acting out an existential self, Baselitz is searching for something more archaic that leans towards a kind of primal impoverishment.' (Power, Kevin. 'Hammergreen'. London, 1991, p.16.) Baselitz sometimes paints with his bare hands and even with his feet, a process which has been related to an almost elemental ritual act. In this series of works he makes specific reference to ancient art which incorporates ritual, including tomb painting, rune stones, Bronze age art, and cave art. He insists on the ritual quality of the human mark in 'Im Wald'. The accumulation of layers of paint has been seen as a metaphor for humus and layers of time and space. Baselitz has acknowledged his unease at the emptiness of a white background. Here the white suggests not so much emptiness but the blinding works from the series which even incorporate the artist's boot marks. Baselitz addresses in his art wide ranging themes which give his art a context well beyond our own era. His work is informed by German art and history and, in particular, carries with it the traumas and anguish of the European experience and, most evidently, the German experience since the Second World War. The forest to which the title of 'Im Wald' refers serves a deep mythological function for all Germans. He is intensely aware of the emotional quality inherent in German art, whether Renaissance art, nineteenth century Romantic art or twentieth century Expressionism. His work encompasses the German tradition ranging from narrative lyricism to the grotesque and to the introspectively psychological. 'Im Wald' is a most significant work by one of the leading artists of a country which may well be the most potent cultural force in the world today and for the foreseeable future.

Georg Baselitz was born Hans-Georg Kern in Deutschbaselitz, a town that would become part of East Germany after World War Two. In 1956, he commenced art school in East Berlin but was soon expelled and relocated to West Berlin, where he changed his name to Baselitz (after his birthplace) and completed his studies.

In his early work, Baselitz searched for an alternative to the predominant art movements of the time and became interested in the art of the mentally ill. He was also influenced by abstract expressionist painters such as Jackson Pollock and Willem de Kooning.

Through the 1960s and 1970s Baselitz developed a distinctive physical expressionist style, which came to be a major influence on the Neo-Expressionist movement of the 1980s.

In Im Wald (In the forest) 1990, the artist makes gestures which seem primal, pointing to his interest in ancient forms of ritualistic art such as cave painting. The title refers to the importance of the forest in German mythology and art. 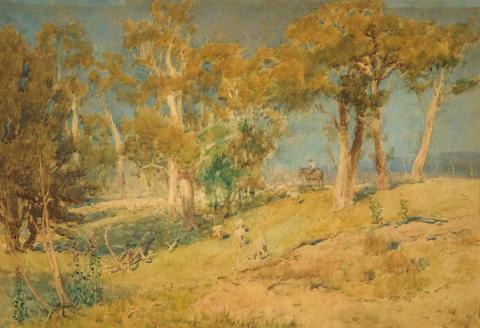 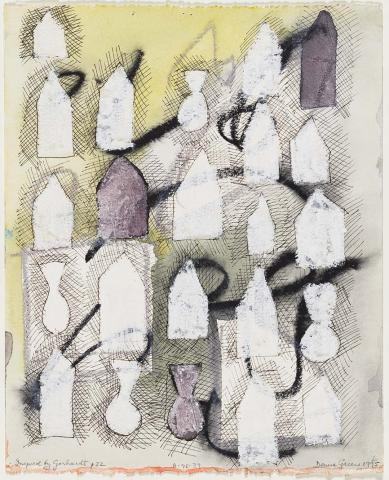 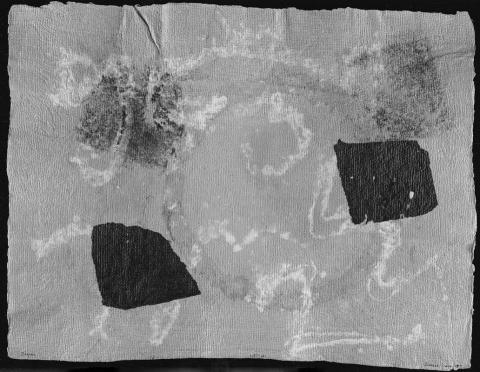 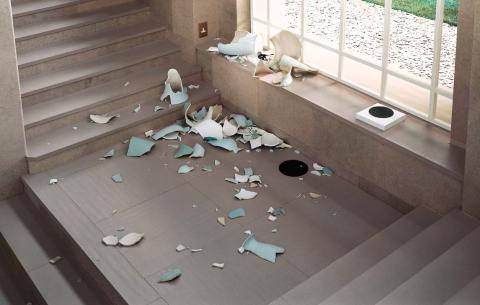