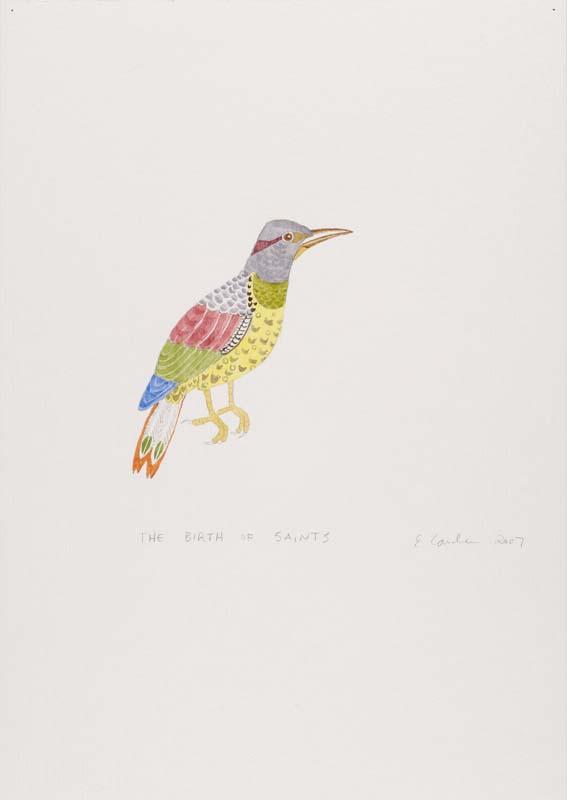 Eugene Carchesio, who was the subject of the survey exhibition 'Someone's Universe: The Art of Eugene Carchesio' at the Queensland Art Gallery in 2008, works on an intimate scale with diverse materials including matchboxes, cardboard, graph paper and more conventional art materials, especially watercolour on paper.

The birth of saints is a suite of seven watercolours ruminating on a variety of birds the artist saw outside his window as he worked on his kitchen table at home in a Brisbane suburb. While each bird has been carefully observed, Carchesio has altered them in a number of ways to become more colourful and more exotic than the originals. Their plumage is almost tropical in hue, several sport elaborate, feathered top-knots, and others are composites of several birds, creating fantastical creatures. Carchesio summons up the exalted status of birds in many cultures as messengers or spirits: the dove that customarily represents the third aspect of the Christian Trinity is perhaps the most obvious example but, as folklore studies in many cultures around the world have noted, birds are frequently seen as the bearers of ideas about the spirit world, and as harbingers of freedom and transcendence.

As the title of this work suggests, The birth of Saints is dedicated to the idea that any, or perhaps every, living creature, however humble, is potentially a miraculous being that can connect us to an enhanced sense of the wonder of the universe.