Aline Amaru was born in Tahiti in 1941 and is self-taught. She forms a part of the Papeete Arts and Crafts village in Tahiti and is particularly known for her paumotu stitch taught to her by her mother. Amaru often works with the artist Urahuimarama Esau.

This tifaifai was made for a competition on the theme of 'Ancient times' in Papeete. For it Amaru chose to depict the Pomare family who were the last kings and queens to reign over Tahiti. The inspiration for the pictorial narrative is derived from a work by Jean-Francois Favre, reproduced in the book Legendes Polynesiennes.(1) Amaru appropriated this image for her tifaifai because her husband is a descendant of the Pomare dynasty. La Famille Pomare has been described as 'remarkable' because of Amaru's combination of the nana'o sewing technique with the more common method of raised hand applique. The outlines of the characters are intricately embroidered by hand.(2)

There are two different processes for making tifaifai, both of which refer to the method of fabrication and the final object; these are the tifaifai pu and tifaifai pa'oti. The former is closely related to the practice of patchwork where a disparate assemblage of fabric pieces are sewn together to create an overall design. In Tahitian, pa'oti means 'to cut' and also refers to 'scissors'. The tifaifai with this name is made with an applique technique requiring a pattern to be traced onto fabric, then cut and finally sewn onto a chosen backing.(3) Amaru's work La Famille Pomare is made using this technique.

La Famille Pomare was chosen to represent some of the best artwork made in French Polynesia at the 9th Pacific Arts Festival in Koror, Palau (22-July 2004) and was displayed in the Belau National Museum. 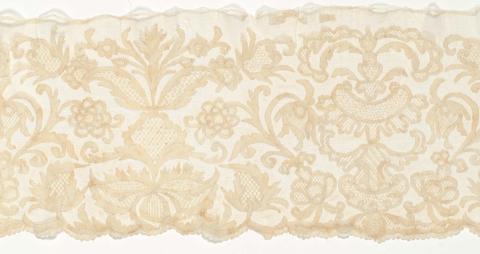 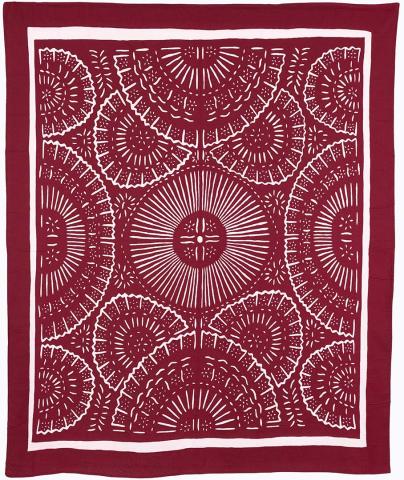 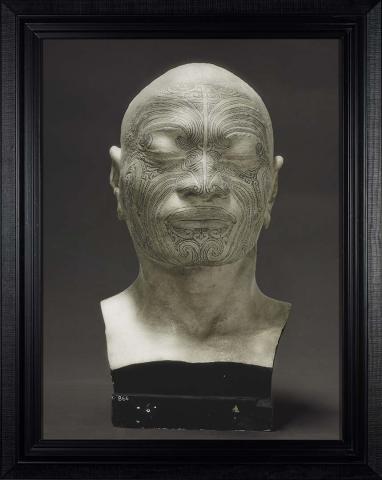 Portrait of a life-cast of Matua Tawai, Aotearoa/New Zealand (from 'Ahua: A beautiful hesitation' series) 2010