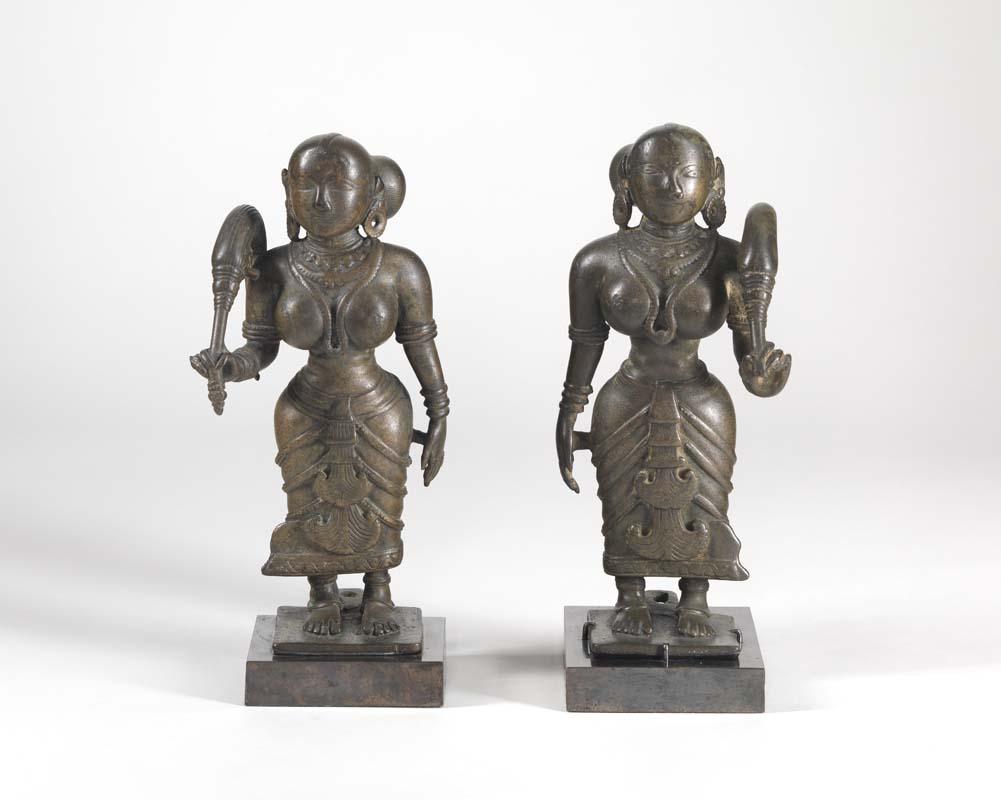 This pair of bronze processional figures is a rare example of figurative sculpture from sixteenth-century India. The figures are originally from the state of Orissa (also known as Odisha) in north-eastern India, one of the country’s major Hindu pilgrimage centres, known for its temple sculpture and architecture. Created in the manner laid down by ancient Hindu religious texts, and specifically designed for temple worship, ritual bronzes in a great variety of forms and styles were essential features of temples dedicated to deities and heavenly gods in India. These figures reflect how Indian sculpture draws on a range of influences including sacred texts and poetry, music, dance, the natural world and cosmology, to inspire worshippers of the Hindu faith.

The bronze figures are most likely representations of gopis (milkmaids), who are often depicted in classical Indian painting as attending to the deity Krishna, a central figure in Hindu mythology, protecting him from flies and insects and offering him various treats. The sculptures appear to refer to this tradition, as they both carry chauri (fly-whisks) that extend and loop over their shoulders. In temple processions and celebrations, the two figures would have probably flanked a sculpture of Krishna, serving as an aid for meditation and worship for devotees, their presence symbolising the devotion of all individuals who dedicate themselves to the deity. This is a significant acquisition for the Gallery as they reflect the importance of ritual in Hindu culture, as well as the exceptional skill and craft in the pre-modern tradition of Indian sculpture.

These ritual bronze figures are also a fine study of the female form; with their voluptuous proportions, bejeweled and upright with broad hips and rounded breasts, they exude a tactile and sensual quality. The eye line and forehead area are slightly worn from contact through worship, but fortunately what has been lost in precision, has been gained in a softened expression. The ample forms are integrated into a balanced whole, with the slender waist cinched in at the centre, accentuating the overall volume of the figure, and their bold and compact silhouettes exemplify the Indian conception of an idealised female form. Although beauty was an important part in the making of temple sculpture, it was not the artist’s first consideration when creating a sacred image in bronze, it was also their ability to convey a spiritual dimension, to become the focus of the faith of a devotee and to enable ‘direct access to the divine’ that was considered infinitely more important.(1)

These sculptures enrich the Gallery’s collection of contemporary works that consider spirituality and belief, including those by Indian artists such as Pushpamala N, Ravinder Reddy, Nilima Sheikh, Nalini Malani and Surendran Nair. The pair of sculptures reflects the sophistication of pre-modern Indian sculpture, and provides a context for an appreciation of the range of cultural, religious and stylistic representations and imagery in the art of the Indian sub-continent.