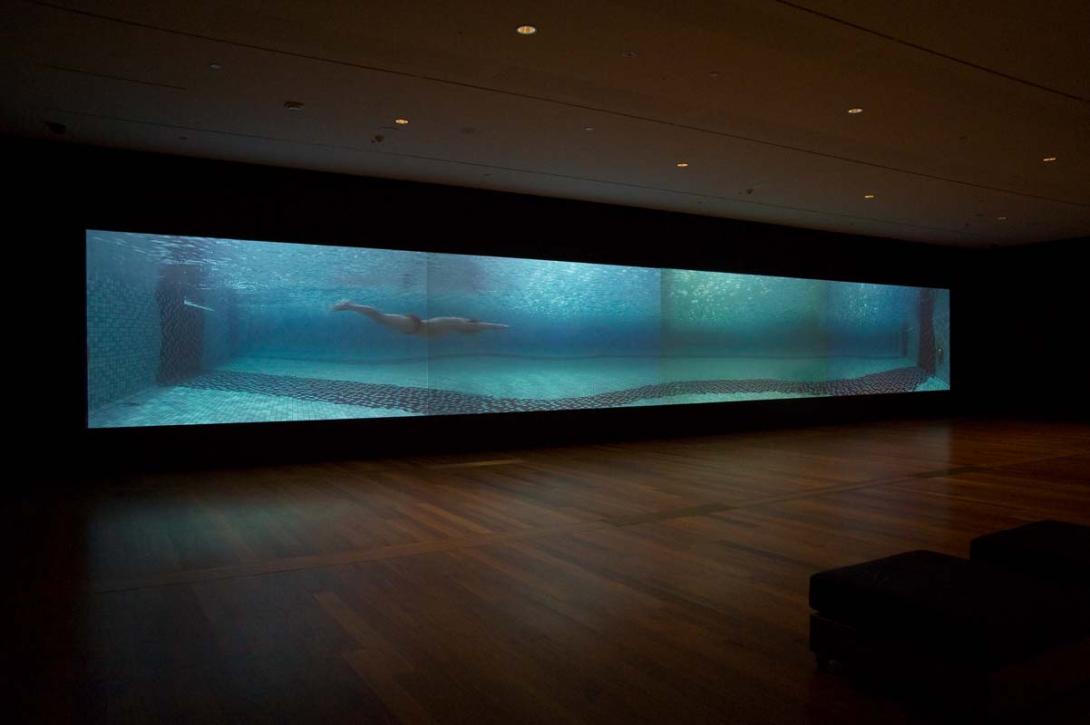 Matthew Ngui, born in 1962 in Singapore, studied art in Perth and has lived in both Australia and Singapore, exhibiting widely around the world. Swimming: at least 8 points of view is a four-channel video projection that was initially produced for his survey exhibition at the Museum of Contemporary Art, Sydney, in 2007. It focuses a figure diving into and swimming laps in a pool, slipping effortlessly from one screen to the next. The two-channel audio features the swimmer discussing his own swimming strokes and performance in the pool on one channel, with the other featuring a swimming coach making comments on the swimmer’s technique. In his practice Ngui consistently questions perception and the single point of view, and he regularly employs methods that fragment or disrupt objects and space. These include anamorphosis (a broken or distorted image that the viewer constitutes from a single vantage point), architectural interventions, and processes of collaboration. The use of four projections in Swimming is also a means of exploring differing perspectives, and the title of the work refers to the four underwater cameras, the swimmer, the coach, the artist and the audience (of which there has to be at least one).

Ngui’s interest in multiple viewpoints is informed by his own moving between cultures and locations in Australia and Singapore. His early performances explored individual identity and cross-cultural interaction through simple actions and materials, such as walks in the landscape and conducting conversations and making Singaporean food for gallery visitors, as in the work he presented at 'documenta X', Kassel, in 1997. His installation work since the mid 1990s has also used direct audience engagement, stretching anamorphic images and objects across galleries and public sites and constructing elaborate networks of PVC pipes to create conduits between people and spaces. Swimming extends Ngui’s interest in bodies in space through complex technology and a sublimely simple action, which nevertheless has endless permutations and interpretations.