Coming of the missionaries 2002 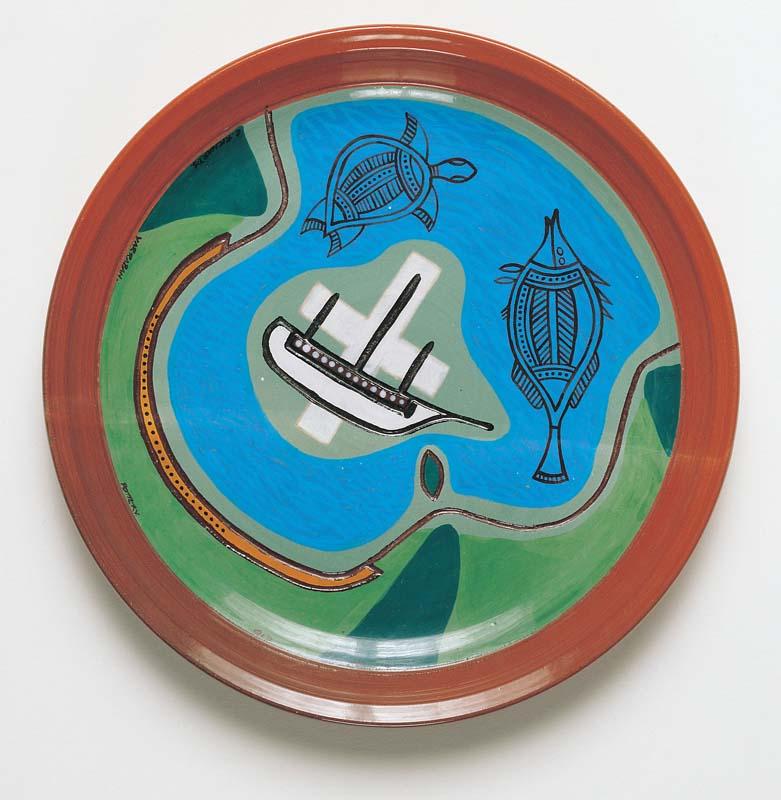 Cornelius 'Connie' Richards, a member of the Gungganyji people, was born on 18 June 1964 in Cairns and has since lived in Yarrabah. He began his career in pottery at Yarrabah aged 17 years when he trained with an American potter Peter Faulkes, and completed TAFE courses in Townsville and Cairns during the 1980s. He has worked at Yarrabah Pottery (now known as Guyala Pottery) since 1983 and is one of the two full time potters currently employed at the pottery. His work 'Men hunting for Jirrin Dingal, Seagull eggs' was included in the Fifth Indigenous Heritage Art Awards in 2000. Richards' works usually depict sea life that is important to his people for food sources, such as turtle, dugong, stingray, snakes and crocodile. Passionate about involving future generations in the pottery workshop, he has donated many of his works for display in the foyer. Richards has recognised the importance of ceramics as an educational tool and in 2002 created a series of plates that narrate the history of Yarrabah. They were initially intended for the exhibition 'Waves of time', proposed for the Maritime Museum in Cairns, which did not come to fruition. Richards was commissioned to make additional plates for the Gallery's 2003 exhibition 'Story place: Indigenous art of Cape York and the Rainforest'. These plates depict important episodes in the history of Yarrabah since the arrival of the Anglican missionaries on 17 June 1892. This work, 'Coming of the missionaries' (Acc. no. 2003.096), depicts the arrival of missionaries, including Reverend John Gribble who established Bellenden Ker Mission, which later became known as Yarrabah Mission. The name Yarrabah was derived from the Gungganyji word 'Eyerreba' which means meeting place. Yarrabah Mission encompassed an 89 square kilometre area along the coastal strip, and included Cape Grafton to the north and Palmer Point to the south. The Gungganyji people are represented by small brown dots along the strip of golden beach line, witnesses to the arrival of the Europeans, shown as white dots along the side of the ship. Yarrabah became home to several other Rainforest groups relocated from their homelands into the mission, which also included labourers from Malaysia and the Philippines. In 1903 Walter Roth, the first Northern Protector of Aborigines appointed in 1898, recommended that all 'half-caste' children be transferred to other missions, generally on the lugger 'Melbidir', depicted in the work with the same title, (Acc. no 2003.098): the striped brown and white dots around the vessel represent those children. Often these children were taken into domestic service in Cairns or for labour with property owners. In August 1904, 85 Badtjala people from Fraser Island were also relocated to Yarrabah Mission on a lugger depicted in 'Rio Loge' (Acc. no. 2003.097). Richards' great grandmother was among this group. In 1905, after some conflict between community groups, the Badtjala people were relocated to a separate settlement on Kobahra (the Gungganyji word for Fitzroy Island), off the mainland from Yarrabah. A church was constructed, using coral from the sea for the walls, seen here in 'Coral church' (Acc. no. 2003.103). By 1907 there were actually eight separate settlements, resulting from a policy of decentralisation, that included a total of 320 people, with twelve paid staff. With the development of separate settlements, the missionaries travelled regularly to the residents on the mainland and across to Fitzroy Island, as depicted in 'Travelling church men' (Acc. no. 2003.104). Richards commemorates this history in 'Yarrabah celebrates' (Acc. no. 2003.102) depicting four traditional flat boats which had sailed out to meet the first missionaries in 1892. Every year Yarrabah people observe the anniversary of the arrival of the missionaries on 'Foundation Day', which is celebrated on the Sunday closest to 17 June by a Christian service in the morning followed by a sports day. Essay by Trish Johnson, Project Officer, Indigenous Australian Art, Nov. 2003. 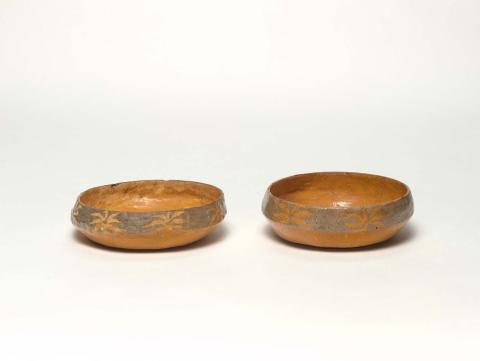 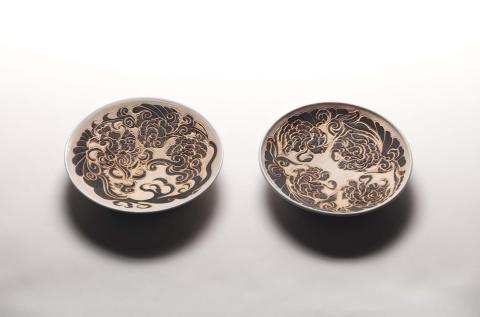 Two dishes: The dragon and the four winds 1996 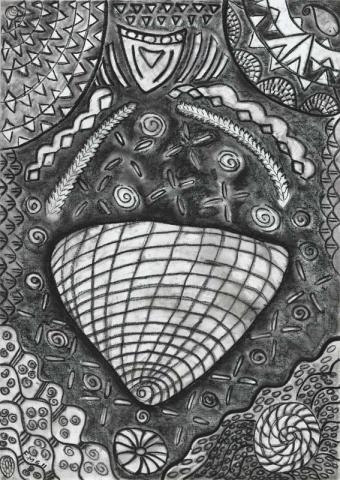 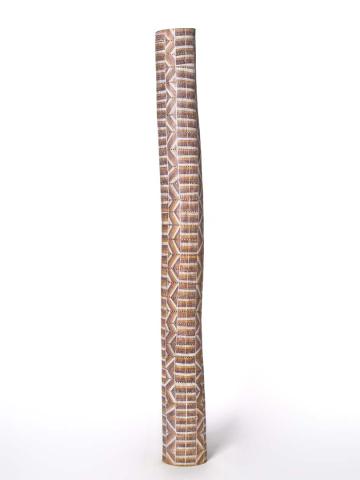 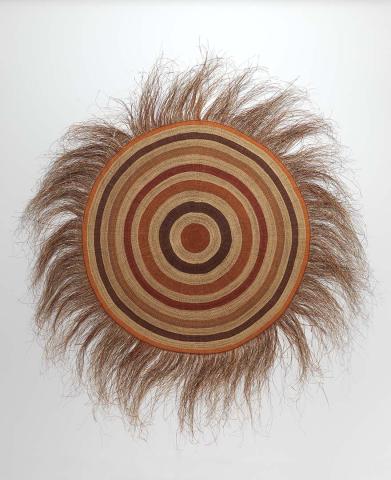