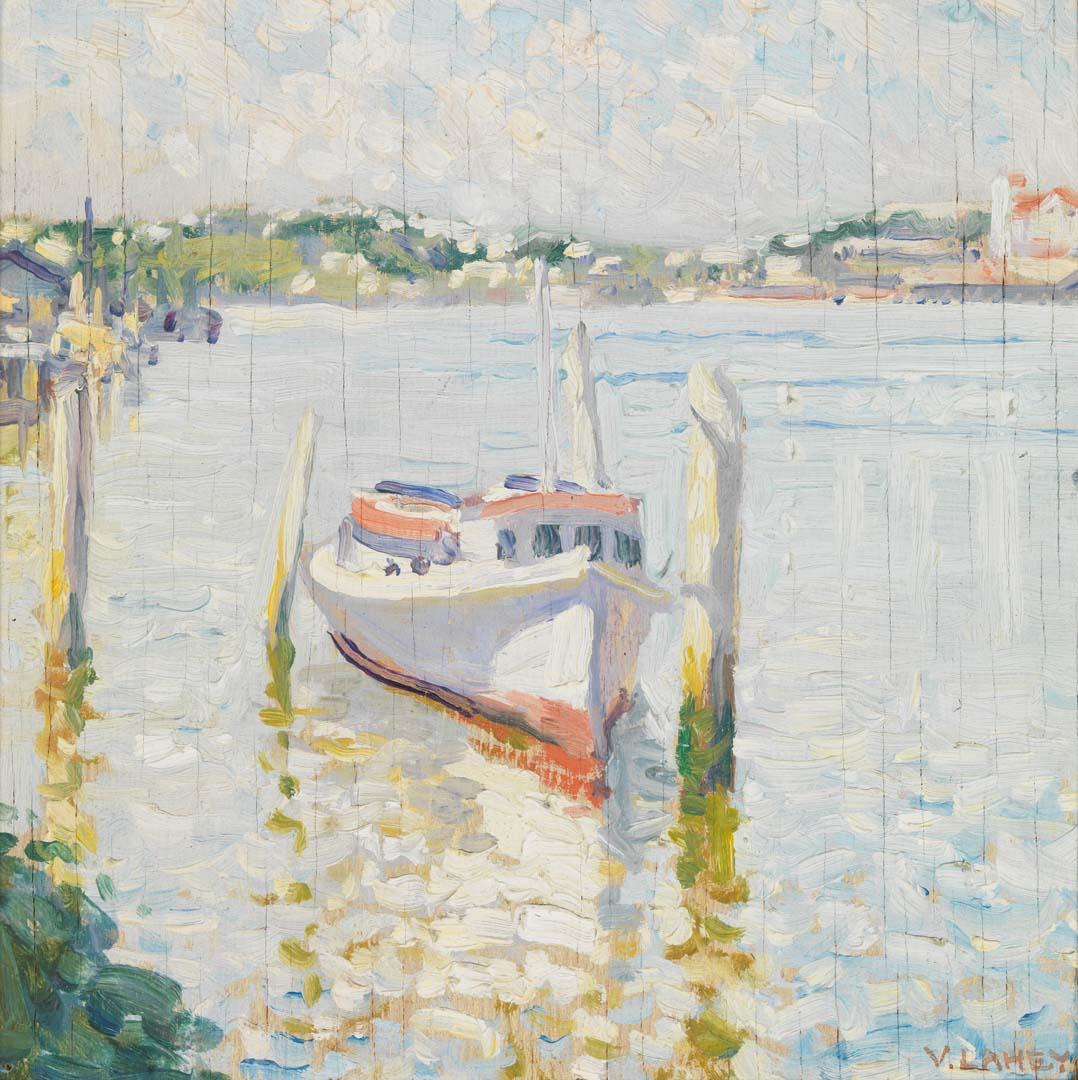 The exhibition 'Vida Lahey: Colour and Modernism', held at the Queensland Art Gallery in 2010–11, revealed the strength and vibrancy of Vida Lahey’s floral studies in watercolour, her accomplishments in landscape painting and her particular skill in depicting light on water. The latter is a feature of the light-filled work Morning light, Brisbane River, recently acquired for the Collection. As with her Beach umbrellas 1933, another of the Gallery’s delightful, small-scaled oils, Lahey’s handling of oil paint here has a strong impressionist touch and is equivalent in colour and panache of execution.

The painting was originally identified as Motor launch and dated to the 1930s, but removing its frame revealed a sticker from the Fine Art Society, at 100 Exhibition Street, Melbourne, where the work had been displayed in October 1930, giving Morning light, Brisbane River as the title. It was also included in her 'Exhibition of Landscapes and Flowers', organised by Jeanettie Sheldon and held at the Watson Ferguson building in Brisbane’s Queen Street a few months earlier.

Although the play of light in the sky and on the water is the principal subject of Morning light, Brisbane River, we are always interested to discover the exact location of a painter’s vantage point. The only clue is the white, red-roofed building in the upper right of the picture. It immediately suggests a Spanish mission revival-style church, and due to its proximity to the river, Our Lady of Victories Catholic Church on Roche Street, Bowen Hills, is a likely candidate. Designed by prolific Brisbane architects TR Hall and GG Prentice during the 1920s and built as a memorial to the Catholic soldiers who served in World War One, the church would have been a fresh subject for Lahey’s brush. If this is the correct building, she was likely painting across the river from Newstead House.

However, it has also been suggested that the building is the old Sea Foam Flour Mill on Stanley Street, South Brisbane. It was demolished in 1981 to make way for the redevelopment of the precinct, which later became the site for Expo '88. By the time of its destruction, the mill’s painted surfaces had long since eroded, making the pristine red and white that Lahey depicts a distant recollection indeed. If this is the case, her view would have been from the city side of the river, downstream from the Victoria Bridge.