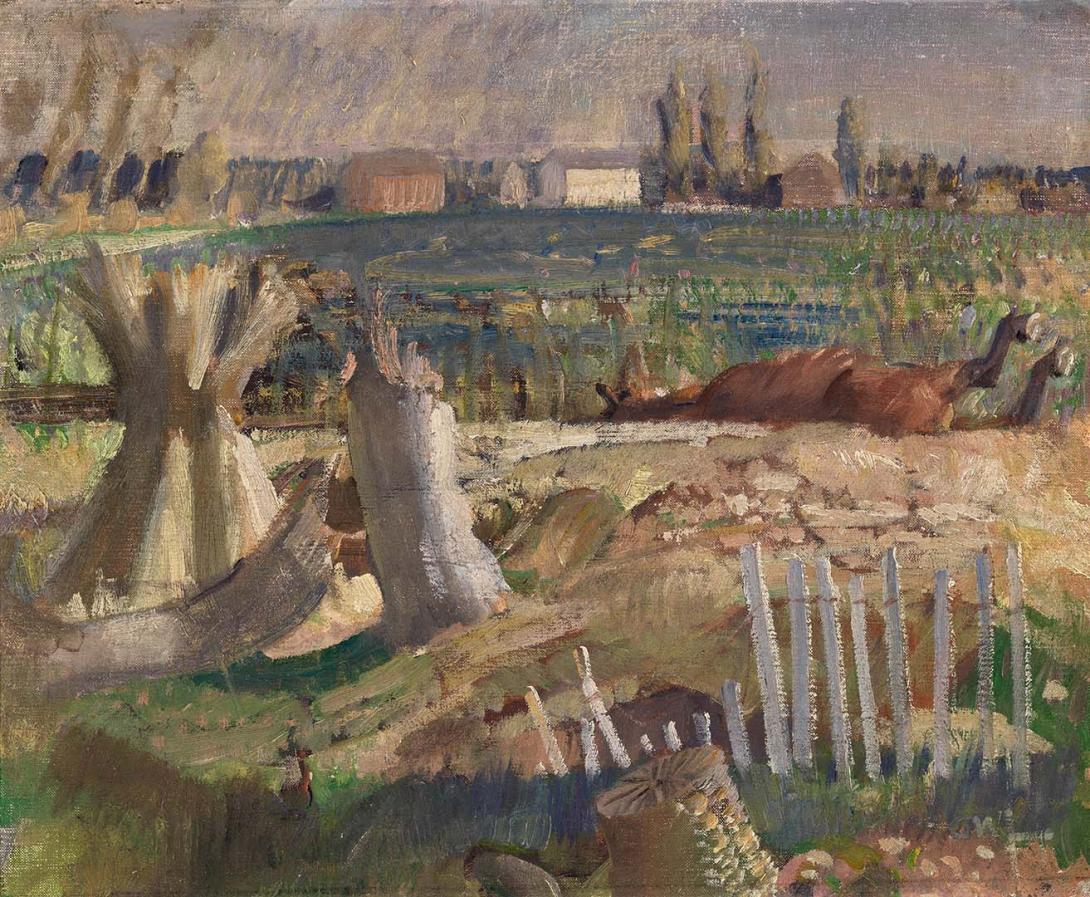 Australian war artists have made a rich contribution to Australian art, while playing a significant role in Australia’s interpretation of its wartime history. One of Australia’s earliest and most respected was George W Lambert, who produced a number of notable war works, including the Gallery’s Walk (An incident at Romani) 1919-22, which was commissioned and gifted to the Gallery by the 2nd Light Horse Ambulance in memory of comrades who did not return from the war.

(War composition) c.1922 was painted after Lambert had completed his appointment as a war artist and had returned to Australia in 1921. At the outbreak of war in 1914, Lambert, unable to enlist in the Australian Imperial Force in London, spent most of the war years in the Voluntary Training Corps, where he taught horse-riding, and later as a divisional works officer supervising timber-getting in Wales. It was not until December 1917 that he was appointed as an official war artist, with the honorary rank of lieutenant, AIF, and commissioned to execute 25 sketches and to paint The Charge of the Light Horse at Beersheba(1), which had taken place on 31 October 1917. This was an intense period of artistic activity that involved travelling to Egypt, Gallipoli and Palestine.

Anne Gray, Head of Australian Art at the National Gallery of Australia, believes (War composition) may have been cut down from a larger, unresolved painting, which initially included a scene of figures in a similar landscape, with this painting occupying the top right-hand corner. The larger painting was possibly a preliminary concept for the War Memorial mural competition for the State Library of Victoria. There is other evidence of Lambert recycling works: the Collection painting Portrait of Thea Proctor 1905, which features the head of the sitter, is in actuality a small section cut from a much larger painting originally entitled 'Alethea' (also 1905). Another painting by Lambert in the Collection that has been cropped from a larger original is The artist and his wife 1904. Evidence suggests that the work was in the artist’s studio at the time of his death and exhibited at Anthony Horderns Gallery, Sydney, in 1930.

We have no knowledge of Lambert travelling to the battlefields in France, so we can assume that (War composition) may have been inspired by a photograph or perhaps a press description. This tranquil rural scene of wheat sheaves and fields is marred by the blasted stump of a tree, broken fence palings and the carcass of a horse. In the background, the open fields appear to be marked by what could be trenches and bomb craters; the only sign of potential life is a group of buildings. The painting depicts a different theatre of war from Lambert’s Walk (An incident at Romani), so usefully expands our holdings depicting World War One.