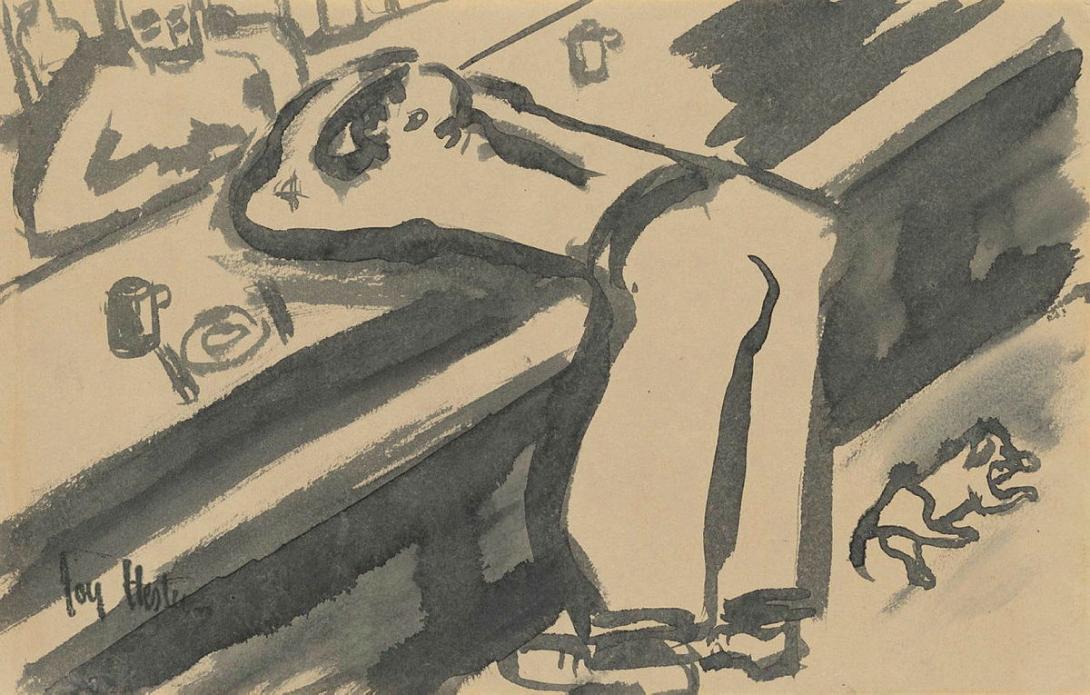 Joy Hester was born in Elsternwick, Melbourne, in 1920. At sixteen she commenced a commercial art course at the Brighton Technical School but left after a year, enrolling in the Drawing School of the National Gallery School in 1937. Hester studied at the School until mid-1938, 'winning a prize for drawing the head from life at the annual students' exhibition.'(1) During this period she met the painter Albert Tucker, whom she was to marry in 1941. Hester mixed with the group of Melbourne artists with whom Tucker associated, including Sidney Nolan, Arthur Boyd and John Perceval. The group, which became known as the 'Angry Penguins', was supported and encouraged by art patrons John and Sunday Reed. Many of the drawings Hester produced during the 1940s were made at the Reed's home 'Heide' at Heidelberg, Melbourne. John Reed recalled that Joy would: 'sit on the floor in front of the fire with sheets of paper before her and produce drawing after drawing ... and yet all the time she would be fully participating in the talk going on around her.'(2) The setting was also conducive to writing poetry, which formed a vital part of Hester's practice. Hester's personal life was tumultuous. In 1947, having been diagnosed with the lymphatic cancer Hodgkins disease, she left Tucker and their son Sweeney and moved to Sydney with the artist Gray Smith.(3) Despite her condition Hester continued to draw prolifically up until 1958 - she painted few oils; her primary achievement was in ink and watercolour drawings on paper. Hester died of cancer in 1960, after a thirteen-year battle with the disease. Hester held three solo exhibitions during in her lifetime: in 1950, 1953 and 1956. She was a founding member of the Contemporary Art Society, and regularly exhibited work in the Society's annual shows. Outside the close-knit art circles in which she moved, however, her work remained largely unrecognised. This situation was partly redressed in 1963 when a commemorative exhibition of her work was held at Georges Gallery, Melbourne. The National Gallery of Victoria mounted an exhibition of Hester's work in 1981, and the publication in 1983 of a comprehensive biography by Janine Burke ('Joy Hester', Greenhouse Publications, Richmond, 1983) completed her restitution into the canon of Australian art. Joy Hester's contribution to the development of modernism in this country during World War II, and in the post-war period, is now widely recognised, and she is accepted as one of the major figures in this remarkable period in Australian art history. This was reflected in two exhibitions devoted to her work: 'Joy Hester & Friends', National Gallery of Australia, 1 Sept.-28 Oct. 2001 and 'Joy Hester: Leave no space for yearning', Heide Museum of Modern Art, 25 Aug.-11 Nov. 2001. 'Figure at a bar' is a fine example of Hester's oeuvre. Sketched broadly in grey-blue washes, the work shows a bare-chested male figure leaning across a bar towards a buxom barmaid. The man, whose tattoo suggests he is a sailor, gazes intently at his prospective conquest, more interested in her than in his beer tankard. The small dog sprawled at his feet adds a comic touch to the scene. The loose application of the watercolour conveys a sense of immediacy, and the high viewpoint gives the viewer the impression that they are privy to a private moment. In exploring an aspect of city life, this work is characteristic of Hester's art. Like her contemporaries, she was concerned with, and sought to capture, the experiences of city dwellers. While she is best known for her portraits of women, and of lovers, Hester also produced more generalised cityscapes, and a series of pub scenes. These include the sketch 'Sailor at the bar' (ink on paper, 20 x 31.5cm, Sotheby's, Melbourne, 2 May 2000, lot no. 293), and the more detailed drawing 'The bar' c.1940 (pen and ink and pencil, 38.1 x 26cm, collection: estate of Albert Tucker), described by Janine Burke as: 'a very literal and specific description of urban life'.(4) In 'Figure at a bar' Hester has treated the setting more generically, preferring to focus on its emotional tone. She has made the work's locality less transparent: the only reference to the drinking establishment is the long counter over which the drinker lounges, and the pint glass. It is most likely that Hester made the drawing in 1944 while she was working at the Hotel Australia in Collins Street, Melbourne. As Burke relays: 'While at the Hotel Australia Joy sketched the waitresses and the customers she observed during her afternoon shift. Afterwards she and Tucker would meet and walk home to their East Melbourne bed-sitting-room... Waitressing at the Hotel Australia was her last job - she quit in the middle of the year when she found she was pregnant.'(5) Essay and biography by Samantha Littley, Associate Curator, Australian Art to 1950, Nov. 2001. 1. Burke, Janine. 'Joy Hester'. Greenhouse Publications, Richmond, 1983, p.55. 2. Reed, John, in Burke, op. cit., p.71. 3. The couple returned to Melbourne in 1948, living in a number of semi-rural locations around the city before settling at Box Hill in 1956. They married in 1951 and had two children. 4. Burke, Janine, in Kerr, Joan. 'Heritage: The national women's art book'. Art and Australia, Roseville East, 1995, p.371. 5. Burke, op. cit., p.75. For information on the Angry Penguins, see Acc. no. 1995.151 'Additional information'. 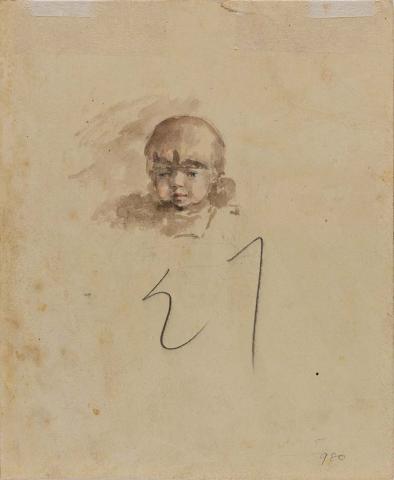 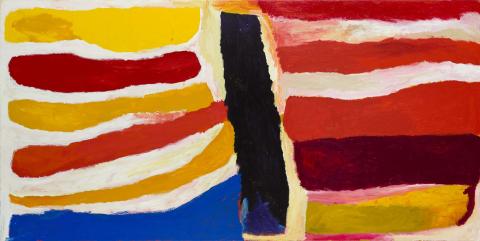 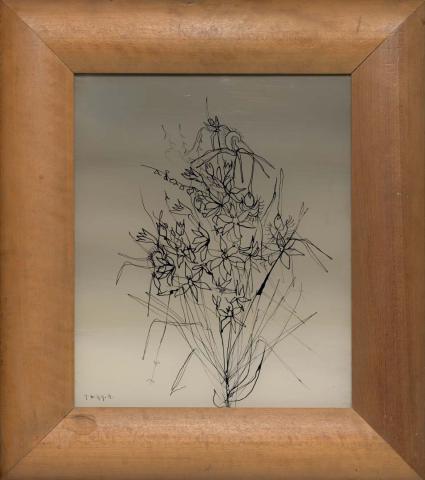 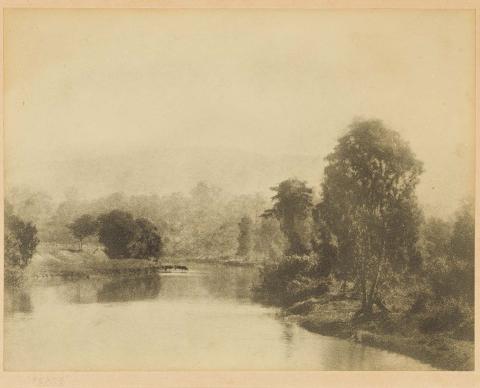 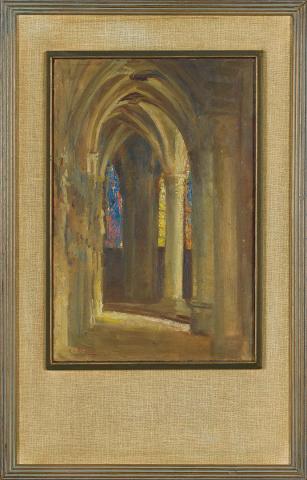 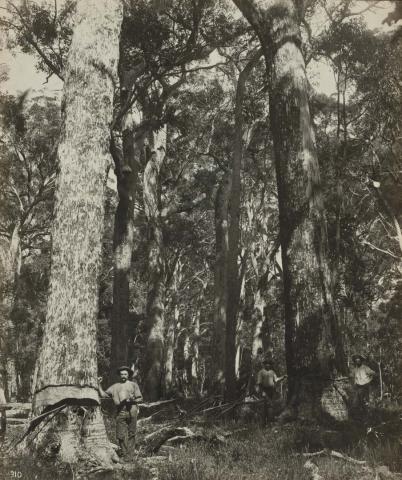