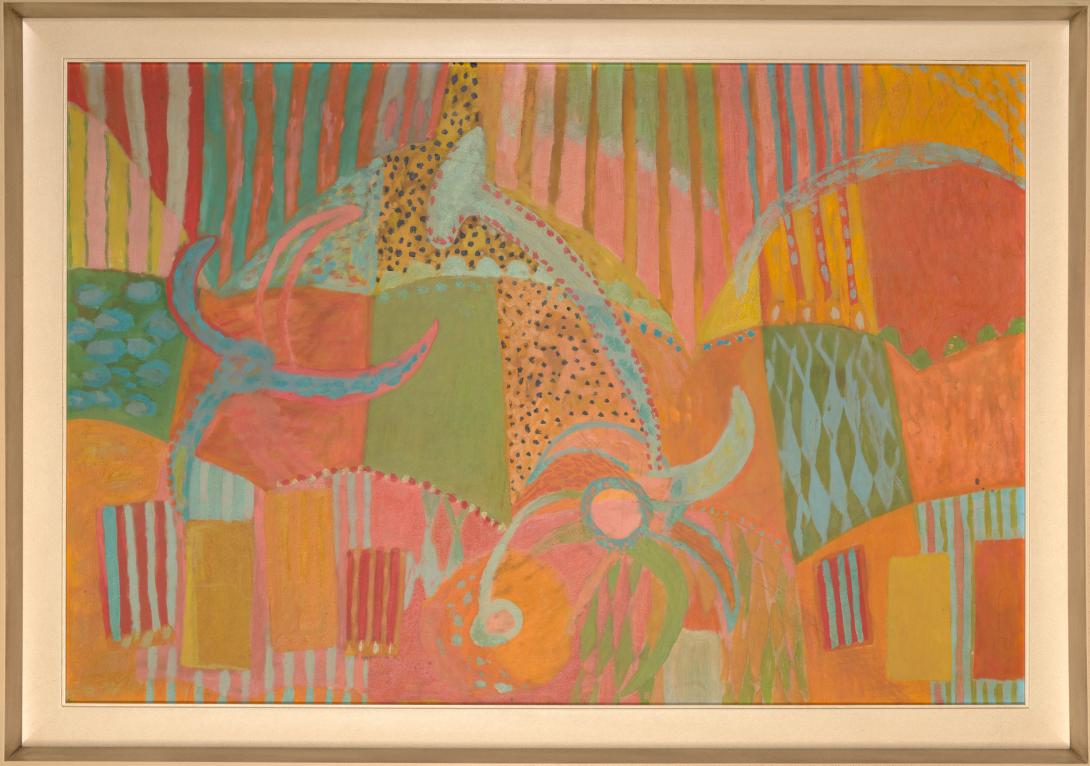 Jon Molvig (1923–70) settled in Brisbane in 1955 and the city became the catalyst for his major work. A volatile and rebellious character, he was also a charismatic teacher and his figurative expressionist art had a lasting influence on a number of artists who would come to dominate the local art scene. The Gallery holds an impressive collection of his works, now joined by Carnival motif c.1952 — an early work most likely completed while Molvig was travelling in Europe. The painting’s bold, patterned forms bear the influence of his time abroad, where he was exposed to a variety of artistic approaches.

After he was discharged from the army in 1946, the Commonwealth Reconstruction Training Scheme provided Molvig with the opportunity to train as an artist. The scheme for postwar veterans offered him an education not usually available to members of the working class. However, three years into the five-year course, which he attended at the East Sydney Technical College, Molvig decided to head to London aboard the Orontes with fellow students Bob Mitchell, Bob White and Bruce Armstrong in late 1949. On arrival, Molvig immediately immersed himself in European art, viewing paintings he had known only in reproductions. In 1964, he recalled: ‘I learned from Europe, not in Europe, but from European painting; we all do to some extent’.(1)

In her book on Molvig, Betty Churcher observed three major influences during this time that had a direct effect on Carnival motif. The works of Pierre Bonnard (1867–1947) particularly impressed him, the way that ‘Bonnard, ignoring style, had tracked down his subject through the vehicle of paint . . . the physical world illuminated by memory and colour’.(2)

During the summer of 1951, Molvig saw an exhibition that had an equally profound and lasting effect on him. Organised by UNESCO to accompany a seminar on the Teaching of Visual Arts in General Education, it was an exhibition of the art of very young children. Molvig was impressed by the effortless invention of these paintings, later saying: ‘a painter has to fight his way back to the innocent eye, to the verve and sparkle of child art’.(3)

The third major influence was Norwegian Expressionism, which he experienced after a visit to the Nasjonalgallerie, Oslo, in 1951, where he would have seen the work of Edvard Münch (1863–1944). For Molvig, this visit confirmed the importance of colour as an expressive force to carry the mood of a picture, and the use of strong, rhythmic patterning. Churcher sums up the importance of his sojourn in Europe as a time of ‘assimilation and absorption’.(4)

Carnivals would have been a common sight in Europe at the time, especially in seaside resort towns, providing Molvig with visually arresting subject matter.

With its pinwheel patterning and warm tones of red and orange, Carnival motif is one of the few surviving works from this period that shows the artist engaging with these influences, using simple forms and colours to convey energy and vibrancy.