The pleasure and vexation of history 2017 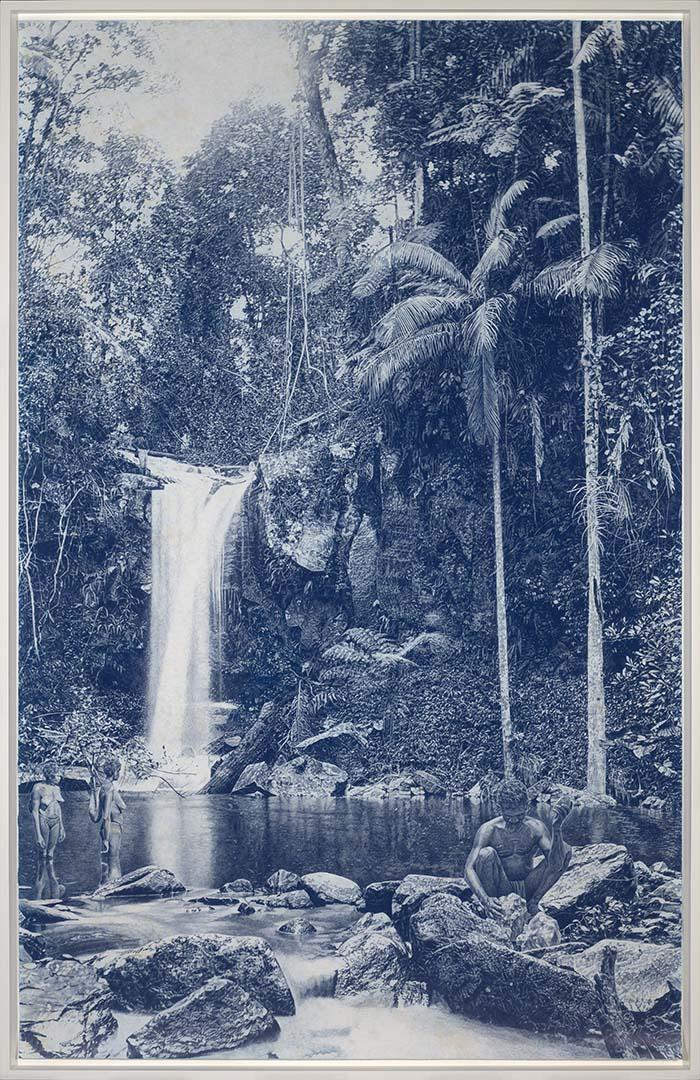 This striking drawing in blue wax pastel by Mackay-born Danie Mellor, acquired for the Collection with the support of the Taylor Family, explores the complex, often troubling intersections between Indigenous and frontier histories, and brings to light the complicated narratives of Australia’s colonial past.

The pleasure and vexation of history 2017 is reminiscent of a tropical paradise - an idyll of tranquillity. Skilfully hand-drawn, and based on early carte de visite and postcard photography of Queensland rainforests, the work depicts a waterfall pouring into a deep pool, surrounded by lush, dense vegetation. In the foreground, three Aboriginal people complete the picture of pristine natural beauty.

As with many of Mellor’s rainforest scenes, however, there is a sting in the tail: the figures in the foreground are unaware of the European man surveying the scene, gazing down at them from atop the waterfall. Mellor has imagined this encounter between First People and European explorers as the ‘calm before the storm’, in a setting that belies what is to come. In this work, Mellor reflects on the breadth of colonial experience, while also contemplating historical confrontations between settler culture and his maternal Mamu and Ngadjon ancestors from Queensland’s Atherton Tablelands.

Mellor’s composition plays with the dichotomy of the ‘unspoilt paradise’ of colonial Australia and the dystopic realities for Indigenous peoples and societies in its path. He poses Bama (people) naturalistically within an idealistic rainforest setting, and then juxtaposes them with a well-dressed European figure, to reinforce the differing ways people viewed the bounty and resources of this fertile land.

A distinctive feature of many of Mellor’s images is his captivating use of a redominant palette of blue. While studying in Birmingham early in his career, Mellor was intrigued by the blue landscapes on Spode dinnerware and tea sets. The famous English ceramics company, founded in 1770, created blue-and-white chinaware painted with scenes from foreign lands for export across the globe. These mass-produced images of faraway places are cleansed - exotic, but stripped of their true nature. Mellor plays on these ideas and conventions, exaggerating the ideal, naturalistic scene, and incorporating broader source material, after having absorbed influences from both contemporary and archival photographs and imagery. In the words of the artist:

The pleasure and vexation of history presents a synopsis of power, an uncomfortable, even sinister, interruption to the allegorical story of timeless harmony unfolding. Its imagery deliberately invokes stereotypes and disarming clichés, and plays on historical narratives generated from unfounded assumptions around Aboriginal people and their cultural and social practice. In this piece, the pleasure of the gaze is heightened in the enchantment of a scene that connotes historical authenticity, and then countered with the vexation of multiple narratives that deviate from and coalesce around attested reality.

Like Danie Mellor’s best works, The pleasure and vexation of history powerfully but subtly articulates a postcolonial history of Australia from the perspectives of both European and Aboriginal heritages, and re-envisages the collision of settler occupation on the unceded Indigenous lands of Queensland.