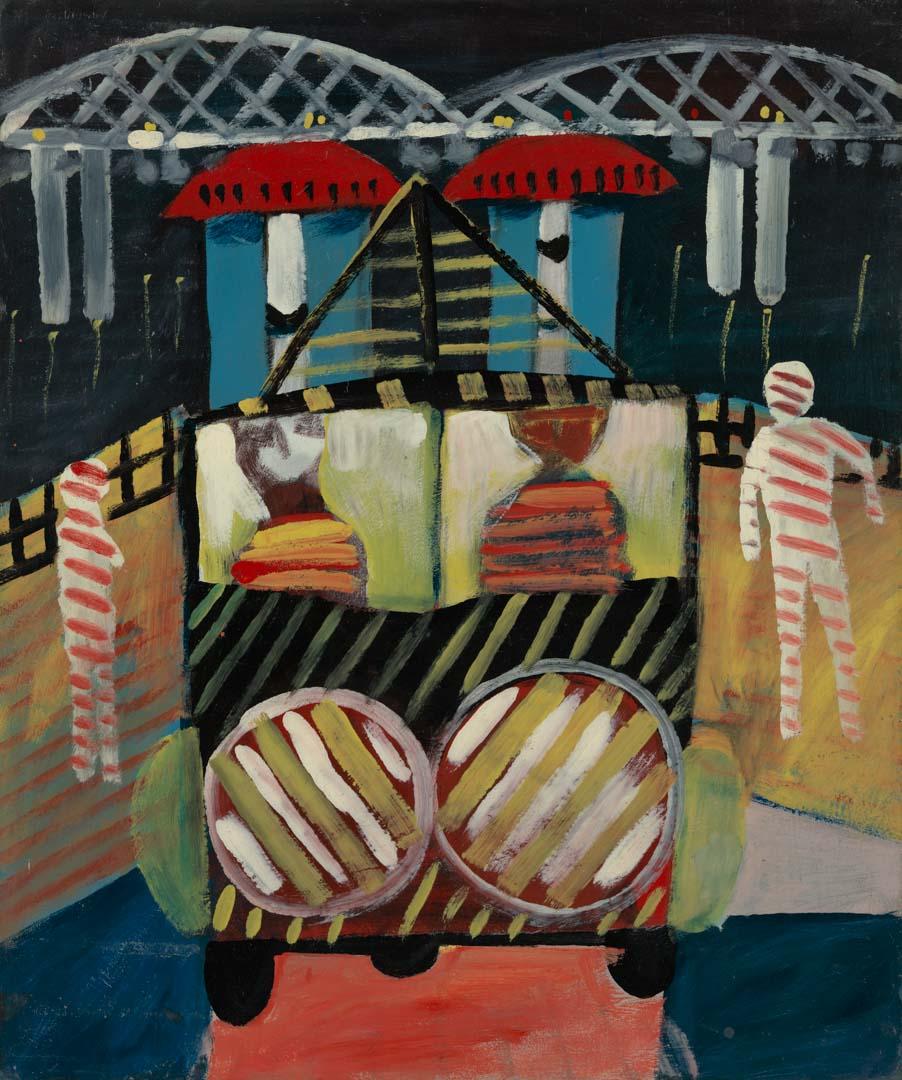 Charles Blackman has had a long and distinguished career in Australian art predicated on the appeal of his ethereal and child-like paintings. Born in Sydney in 1928, Charles Blackman left school before he was 14. From 1942 until 1947, he worked at the Sydney Sun in the compository, process engraving and art departments, taking evening classes at the East Sydney Technical School and at the Meldrum School. In early 1948 Blackman hitchhiked to Brisbane where he met the young artists of the Miya Studio, such as Laurence Hope, Joy Roggenkamp and Laurence Collinson, and the closely affiliated group of Barjai writers including Barrie Reid, Laurence Collinson and, most crucially, his wife- to-be Barbara Patterson. These figures became major formative influences on his artistic practice.

While in Brisbane, Blackman became influenced by the paintings of Sidney Nolan (1917–92). In February 1948 he viewed work by Nolan at the Moreton Gallery, Brisbane, in an exhibition inspired by Fraser Island. Blackman was also introduced to the work of modern European masters at this time, since his friend Barrett Reid was custodian of the Carnegie Art Reference Library, which held an extensive range of colour reproductions. Reid was also linked with Nolan — the Gallery holds a 1947 portrait of him by Nolan (Acc. no. 1984.098).

These connections proved fruitful. Barrett Reid had earlier introduced Laurence Hope to Sunday and John Reed at Heide, during a visit to Melbourne in 1946, so that when Hope and Blackman hitchhiked to Melbourne in 1950, Hope was able to introduce Blackman to the Reeds. In 1950 Blackman also reconnected with Barbara Patterson, who was then living in Sydney, and the couple moved to Melbourne where they married on 18 June 1951.

One of the attractions for the move to Melbourne in 1951 was in fact to further a connection with Sidney Nolan and Albert Tucker but, unfortunately, by that time both artists had moved overseas. Like Nolan, Blackman found himself attracted to the beach suburb of St Kilda and its relaxed and colourful lifestyle. Although Nolan had ceased painting St Kilda subjects by the mid-1940s, Blackman had access to such works in the Reed's collection, as they owned Bathers 1943 and Ferris wheel 1945. Felicity Moore notes in 'Charles Blackman: Schoolgirls and angels' that in 1952 Blackman made 'Nolanesque pictures of St Kilda, night lights with gold paint, Ferris wheel and pier with Burley Griffin street lights . . .'(1)

In Melbourne, Blackman's impoverished situation began to change when he received the patronage of John Reed (co-editor and -publisher of the 'Angry Penguins'), President of the Contemporary Art Society and founder of the Museum of Modern Art and Design of Australia, Melbourne), who drew the attention of newspaper critics to his work. He exhibited with the re-established Contemporary Art Society, and at the new Mirka Gallery at 9 Collins Street. His drawing The swimmer, shown at the Peter Bray Gallery, caused a press controversy ('Herald', Melbourne, 12 and 19 May 1953) that further enhanced his reputation.

In 1952, the Blackmans travelled north for the winter to make the first of several annual visits to the poet Judith Wright and her husband Jack McKinney on Mt Tamborine. The Blackmans also visited Stradbroke Island and Barbara's mother in Brisbane.

Before they left Melbourne, Sunday Reed presented Blackman with a leather plumber's bag filled with brushes and small tins of Dulux enamel paint. The bright glossy surface of City lights suggests that it may have been painted with house paints, possibly these very paints. The influence of Nolan clearly continued in Brisbane as the most striking impression of City lights is its affinity with Nolan's St Kilda works. The parallel with Bathers 1943 is particularly noteworthy, in the rigid, formal presentation, the schematic figures and the emphasis on striped forms. The simplification of the forms reflects both Nolan's work and the child-like quality that was to become a significant aspect of Blackman's own paintings.

The painting was completed at Barbara's mother's flat in Kelvin Grove.(2) City lights seems to be painted from North Quay, directly opposite the present site of the Queensland Art Gallery, as we see in the distance a representation of the arched sections of the old Victoria Bridge (demolished in 1969).(3) The masonry arch that terminated Queen Street is just out of the frame on the left of the painting. In the post-World War Two period trams travelled along the river bank through North Quay, as period photographs reveal. However, despite these unmistakable references, the subject of the painting is quite ambiguous; the two figures seem to be riding in a tram with the striped figures of the men working on the roadway; or are they on the decking of a barge? Blackman's perspective, however, is deliberately expressive and distorted, as the tram appears to be heading directly into the middle of the arches. The scene is obviously set at night, as pinpricks of light are reflected on the black waters of the river, but the yellows, reds, blues and whites suggest the scene is electrically lit, so as to register this intensity of colour. The painting is formally balanced, being almost completely bi-laterally symmetrical. Yet the composition is set just off-centre, which establishes a sense of instability and an atmosphere of unease, as though the social disjuncture caused by World War Two, and in Brisbane associated with the intense social activity of the South Brisbane area, had yet to settle into the comfort and security of the 1950s.

City lights is a striking and important painting in Blackman's early career and establishes a telling pictorial connection with innovative artists of the period based in Melbourne. Just as importantly, Queensland was also the source of inspiration for several major series of works. For instance, the seed for his 'Schoolgirl' series was sown by a sensational murder in Brisbane in 1952 while his 'Faces and flowers' series was inspired by his visit to Queensland in 1959, when he visited his mother-in-law's garden and flower farms at Mt Tamborine.

City lights effectively links the avant-garde artists and writers in Brisbane in the 1940s and 1950s with their southern counterparts. This 'Queensland' painting is an integral part of the story of Australian art in the years immediately after World War Two.

3. The arch on the south bank of the river still survives adjacent to the present bridge.

For biographical and background information on the artist covering the post 1960 period see Acc. no. 2:1197 'Additional information'.

Charles Blackman’s Barnes Auto, Brisbane, a significant early painting from 1952 is a companion to City lights (also 1952), which was acquired by the Queensland Art Gallery in 2005. 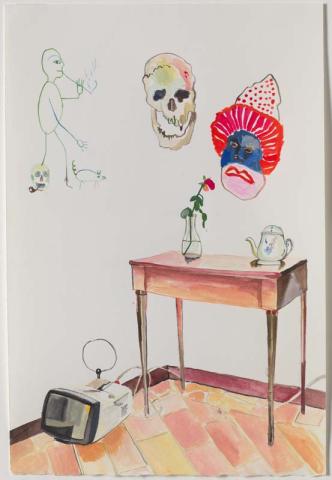 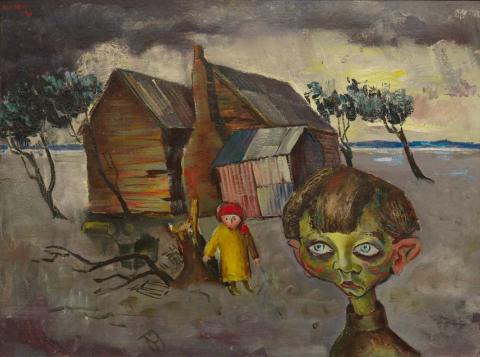 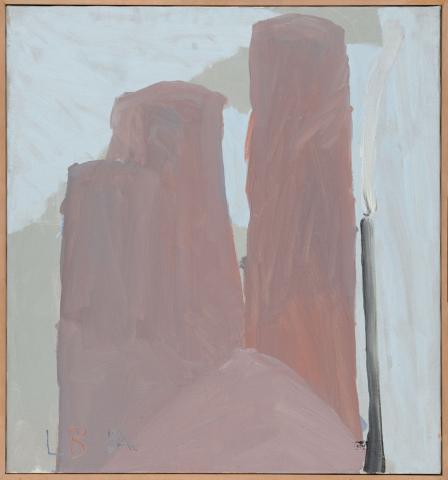 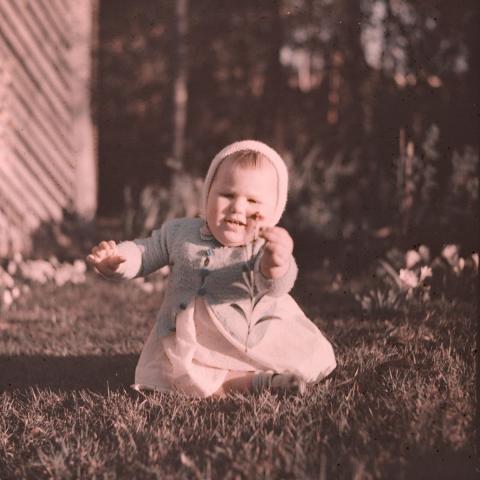 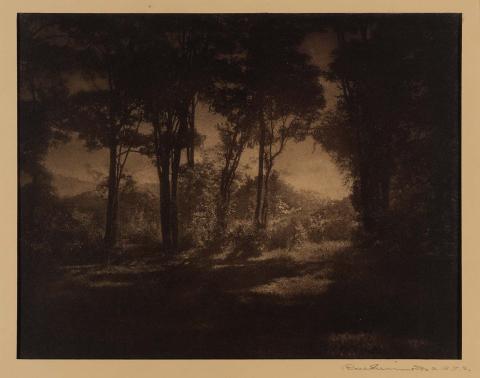 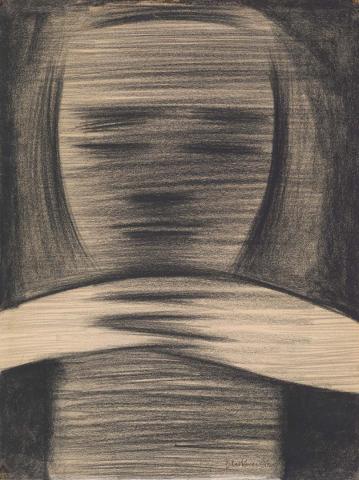