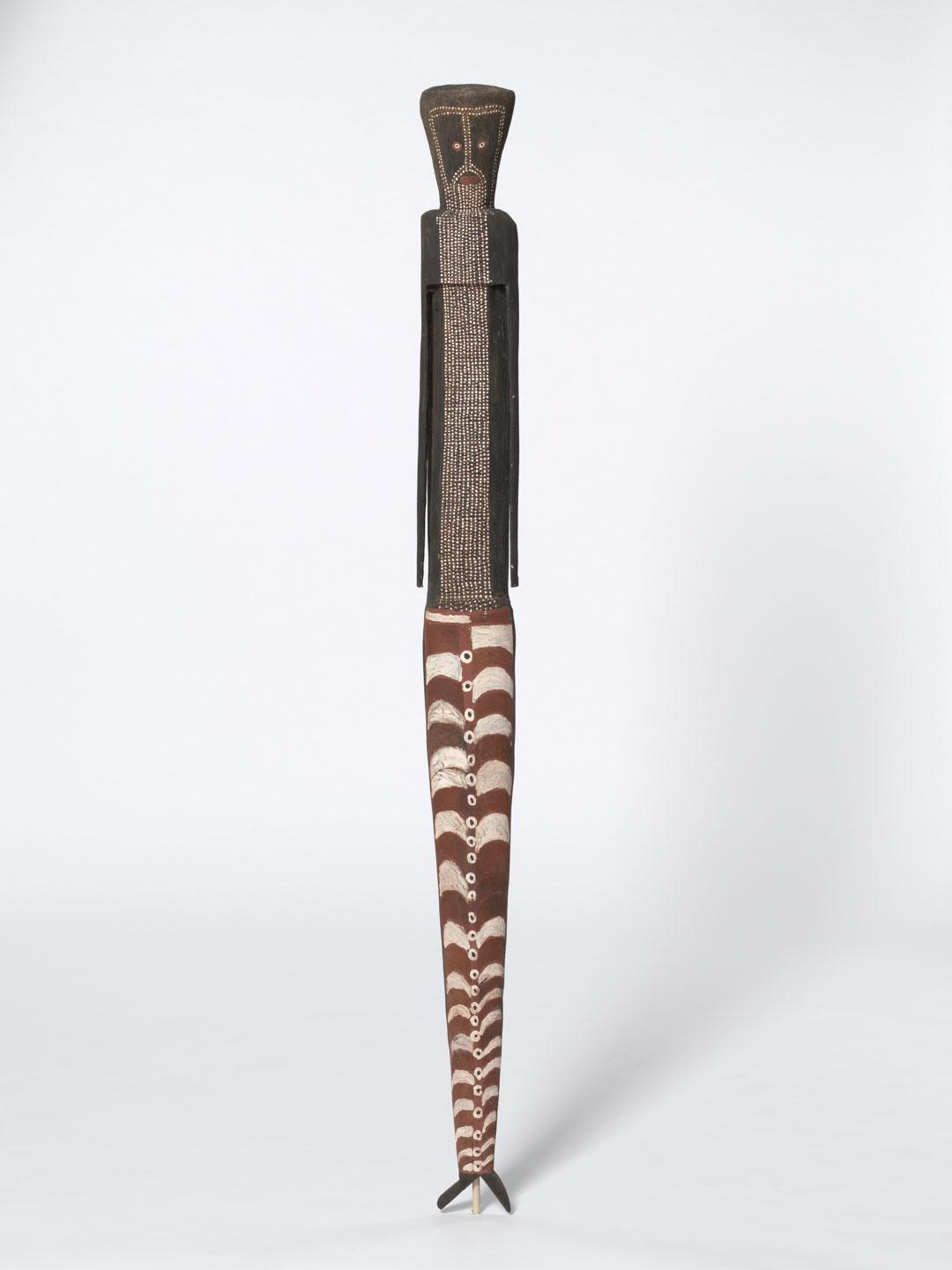 Owen Yalandja was born in 1962 into the eastern Kunwinjku people of central Arnhem Land. He is the son of Crusoe Kuningbal (deceased) who is recognised as being the first artist to have reproduced Mimih spirits in carved wooden sculptures. These long, thin spirits, often painted by their ancestors on cave walls, are associated with the dry, rocky country of the Kunwinjku clan. Mimih spirits are also incorporated into designs painted directly onto the bodies of men enacting vigorous ritual dances inspired by the Mimihs' movements. Whilst Yalandja and his brother Crusoe Kurddal have continued their father's tradition, Yalandja has more recently expanded his repertoire to become the specialist sculptor of the enigmatic Yawkyawk, or Ngalkunburriyaymi spirit, and he also paints their image on bark. In the Kunwinjku language Yawkyawk means 'young woman' and 'young woman spirit being.' Yawkyawk are spirits with fish tails who inhabit freshwater streams and rock pools at specific sites in rocky escarpment country. They are part of the ritual cycle related to the daughter of Yingarna, the Rainbow Serpent, the supreme creative being for Kunwinjku people. They most closely resemble the European notion of a mermaid, with long, flowing hair formed by trailing blooms of green algae (man-bak). Even today Yawkyawk are believed to leave their aquatic homes to wander on dry land under cover of darkness, continuing the journeys of their ancestors. Yalandja belongs to the Dangkorlo clan whose primary ancestral land is at Barrihdjowkeng. This is an important Yawkyawk sacred site, one of several in the area south and south-west of Maningrida. Another major site is on the Mann River at a place near Yikarrakkal, where rugged rocky banks with clefts beneath stone ledges overhang the water. (This is the country of elder and distinguished fellow Kunwinjku artist Mick Kubarrkku, who also paints and sculpts Yawkyawk figures.) Further west in the Kumadderr River district is a site surrounded by a number of ancient small rock paintings, known locally as 'Dreaming Lady', where cool, refreshing rock pools embody the very essence of the Yawkyawk habitat. Some features of the landscape are equated with body parts of Yawkyawks, for example a bend in a river or creek may be said to be 'the tail of a Yawkyawk spirit', a waterhole its head. Yalandja's early, tentative exploration of the Yawkyawk story was through small ochre paintings on bark, which were quite distinctive in their bold representation of a single theme, for example 'Three Yawkyawks from Barrihdjowkeng' 1995 (Acc. no. 1996.105a-c). He then began carving the soft wood of mature red silk cotton trees (Bombax Ceiba) into long, thin fish-tailed beings of exceptional scale. The large works are impressive, and groupings of these have been installed to great effect suspended from gallery ceilings. These smaller-scaled sculptures (Acc. nos 1994.024, 1996.105a-c, 2003.165-170), shaped to follow the natural twists and turns of the wood of juvenile trees, embody the ethereal beauty and sinuous movement of the enigmatic water spirit. The impression is further enhanced by the camouflage of painted bubbles, achieved through finely dotted patterning in natural pigments painted over a red ochre or black charcoal ground. The Yawkyawk creation story is a very real part of the environment and identity of Kunwinjku people, linking clan groups through their shared mythology. Essay by Diane Moon, Associate Curator, Indigenous Fibre Art, Mar. 2004. 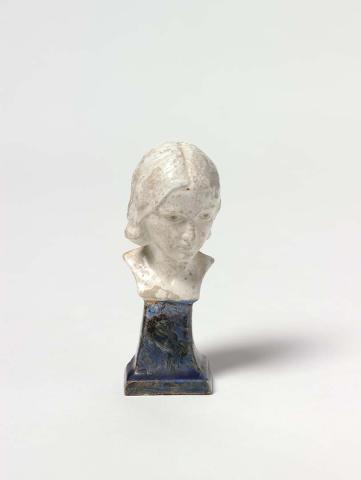 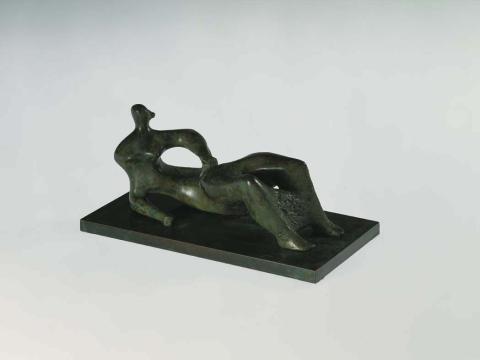 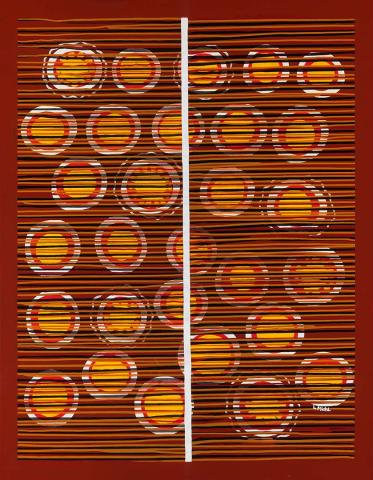 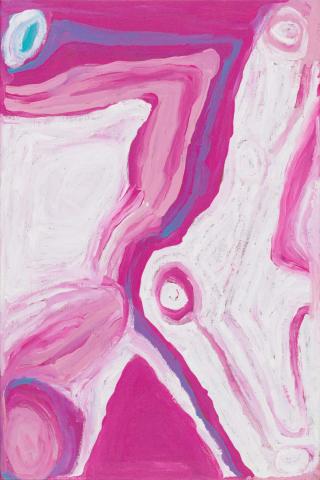 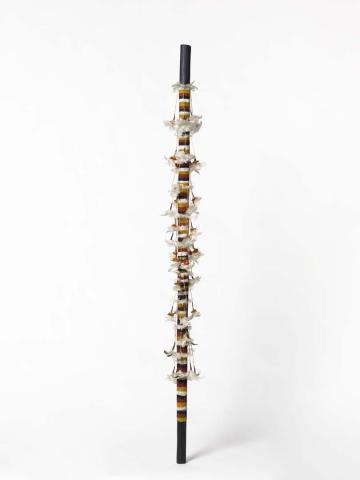