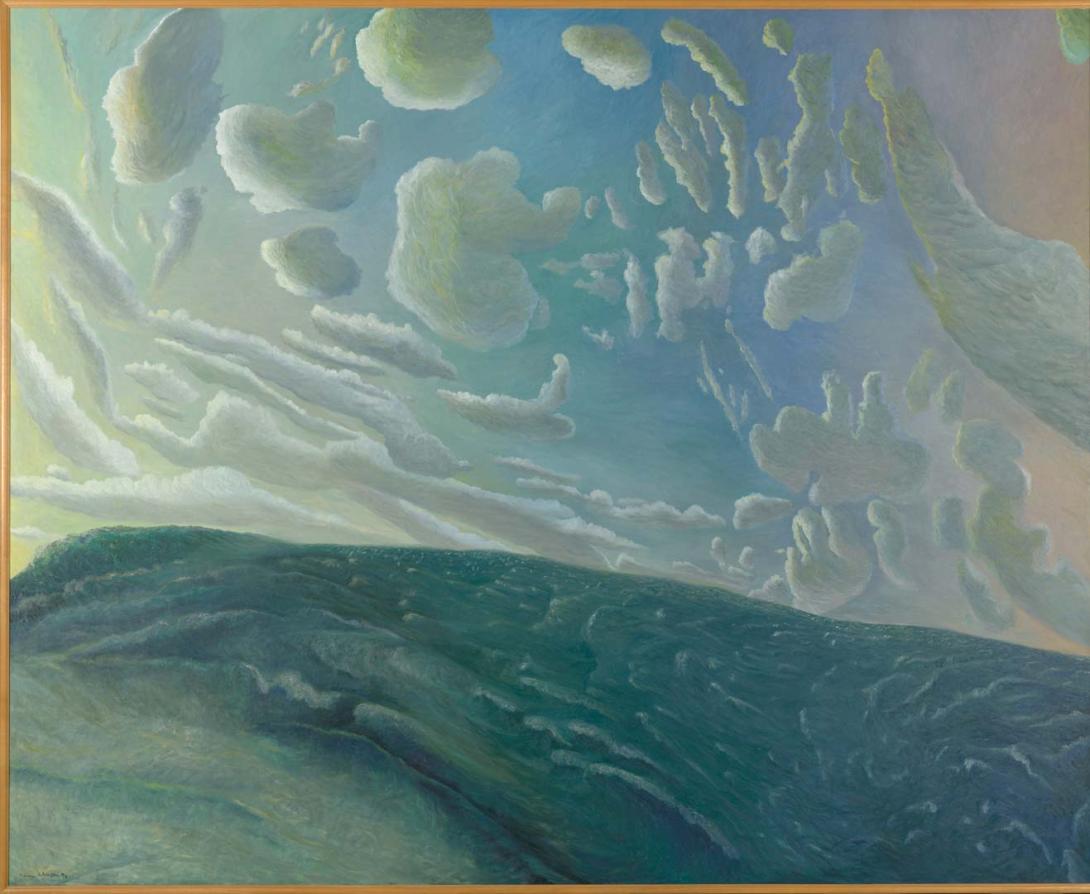 For biographical information see Acc. no. 1985.037 'Additional information'. 'Dark tide, Bogangar' represents William Robinson's first major departure from the subject that had been central to his work for over a decade: the rainforest 'biospheres' of the Canungra-Beechmont area of south east Queensland. The shift in focus was prompted by Robinson's move, in 1994, to Kingscliff, a small seaside town in northern New South Wales. Living on the edge of the ocean opened up new possibilities in Robinson's work, and stimulated the creation of a series of seascapes. The increasing complexity of his work is apparent in this painting, which is related in format and execution to the grand-scale 'creation' landscapes dating from the early 1990s. Robinson has eliminated all traces of whimsical and idiosyncratic detail to depict a power in nature that in his earlier works is usually made to appear less daunting. The tradition of 'visionary' landscape has well-established precedents in Australian art history; however, Robinson's works imply a space and time continuum that has nothing to do with conventional modes of seeing. The shifting perspective created by planes which recede, tilt and plunge reinforces the feeling of a vastness in nature which is impossible to express or experience from a single, fixed viewpoint. 'Dark tide, Bogangar' is a panoramic and melancholy seascape depicting the dark body of a turbulent ocean silhouetted against a pale sky. The scene records the multiplicity of nature's moods through an entire day, which unfolds across the painting from left to right. A dark tide rises up against the morning light before sinking back down under the evening sky. Behind a canopy of clouds, the background of sky separates into bold vertical bands of changing colours. Each colour dissolves into the next to form a continuum of transitions. The work's composition is simple, but its formal workings are complex. The painting knits together a multitude of intersecting perspectives. Simultaneously separating and mediating between the near and the far, the above and below, and the before and after, it juxtaposes numerous perceptions that ultimately consolidate to form a single image of the sea and the sky. Within the vast panorama, the viewer's gaze is drawn to the water's horizon, where the darkness beneath contrasts sharply with the clarity of the air above. Swelling against the writhing horizon, the sea appears not as alien to the sky but as an interdependent element, breathing in and breathing out. Tilting heavily to the right, the horizon seems to react to the rhythm of the waves, as though one's gaze is cast adrift on the brooding sea. The dark form of the ocean occupies a little under one third of the area of the picture. The remaining area is divided evenly between an expanse of illuminated sky and numerous floating clouds. Both sea and sky are experienced without the support of any land. Since the painting has no foreground, the ocean appears to rear up like a barrier, blocking the view of the space behind, which is discernible as the picture's only source of light and offers a kind of faint promise from an inaccessible distance. The scene is perceived from an indeterminate vantage point, suspended between sea and sky, and not subject to the laws of gravity. The ambiguous viewpoint lends further uncertainty to the spatial dimensions of the picture, and serves to articulate a metaphysical dimension within the painting. Robinson's idiosyncratic technique of painting all-encompassing panoramas in tiny brushstrokes conveys the vastness and the minute detail of the universe, frequently giving the sense of it soaring above the head of the viewer. 'Dark tide, Bogangar' is solidly and meticulously constructed of these dense and distinct mosaic-like short brushstrokes. Each brushstroke is visible both in terms of its autonomy and of its place within the whole, creating a compelling tension between the material aspect of the painting and the scene depicted within it. This duality - the fact that the individual brushstrokes stand alone and simultaneously integrate into the scene - echoes the painting's integration of multiple perceptions and reflects the artist's holistic view of nature. Adapted and expanded from Beckmann, Michael. 'Breathing in and breathing out: Dark tide, Bogangar', in 'Darkness & Light: The Art of William Robinson'. QAG, Brisbane, 2001, pp.134-5, by Alison Lee, Research Assistant, Dec. 2002.

It records the multiplicity of nature's moods through an entire day. The scene unfolds from left to right: a dark tide rises up against the morning light before sinking down under the evening sky. Swelling against the writhing horizon, the sea appears not as alien to the sky but as an interdependent element.

William Robinson knits together intersecting perspectives, near and far, above and below, before and after. These juxtapositions ultimately consolidate to form a single image. However, the scene is perceived from an indeterminate vantage point, suspended between sea and sky, and not subject to the laws of gravity.

This ambiguity lends further uncertainty to the spatial dimensions of the painting, and serves to articulate its metaphysical aspect. The shifting perspective created by planes which recede, tilt and plunge reinforces the feeling of a vastness in nature which is impossible to express or experience from a single viewpoint. 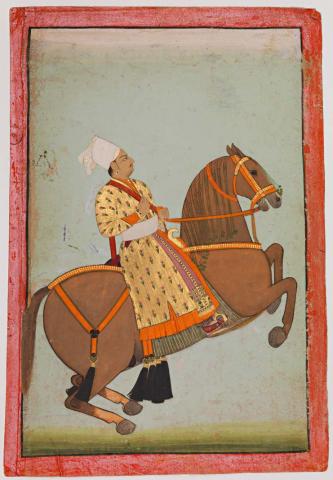 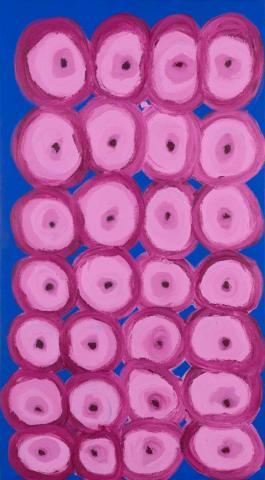 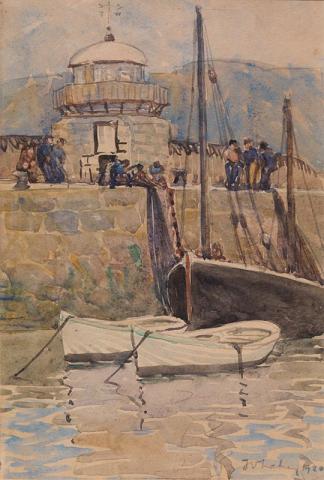 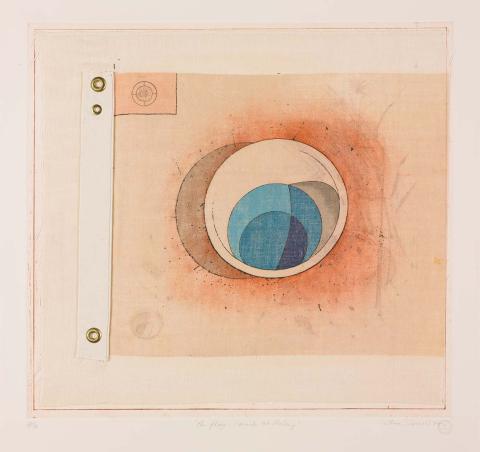 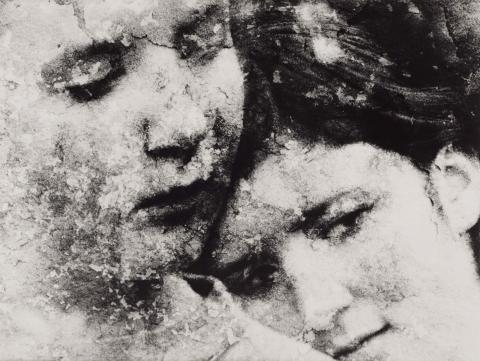