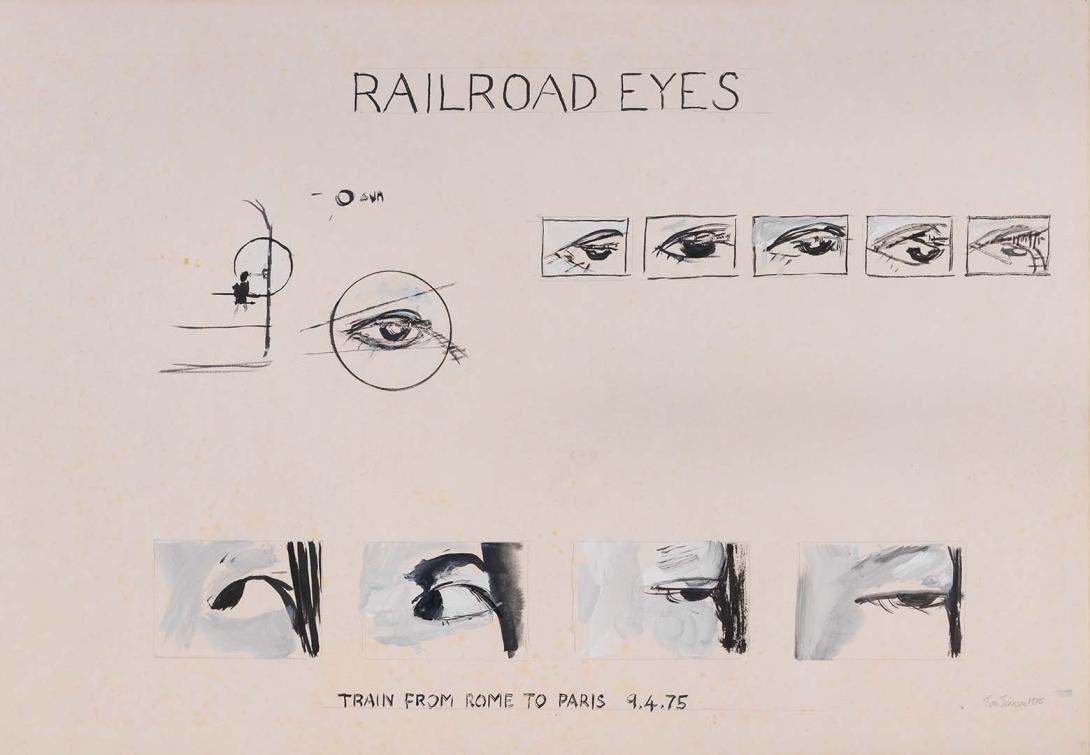 For biographical information see Acc. no. 1993.032a-l 'Additional information'. This work is one of a group of paintings on paper that marks the early years of Tim Johnson's return to painting in the mid 1970s. From the late 1960s to 1973 Johnson had abandoned painting altogether to pursue the possibilities presented by conceptual art. These 'post-conceptual' paintings show that, for Johnson, it was impossible to return uncritically to the representational forms of painting he had practised as a very young man. This work, 'Railroad eyes' 1976, in particular, refers to Johnson's interest in conceptual practice and the operation of visual systems. The text 'TRAIN FROM ROME TO PARIS 9.4.75', scrawled underneath sketches of a human eye from various angles, references earlier works in which he documented 'erotic' and 'sound' journeys (see 'Spare Parts' 1971, Acc. no. 2001.133 and 'Be an artist' 1976, Acc. no. 2001.130). In the mid to late 1970s, Johnson consciously worked both with and against the history of European painting, searching around in a remarkably heterogeneous set of styles and subjects for a definitive way to progress his practice as a painter. In these works, he experimented with a variety of figurative, abstract and systematic forms of imagery. These works are valuable both in terms of Johnson's later development and as an expression of the deep uncertainty that many younger artists felt at the time about returning to painting in the face of the reductionism of minimalist and post-object art. In these works we see Johnson investigating Eastern philosophies, and investigating experiences of landscape, both in Australia and during his travels in the Indian sub-continent. He even made a series of extremely reductive works which explore the structure of visual images and vision, such as 'Chessboard' 1976 (Acc. no. 2001.118) and 'Untitled (Colour squares)' 1977 (Acc. no. 2001.120). Johnson has commented on the group of works with the title 'Mandala' (Acc. nos 2001.122-125): 'These drawings were done after a short stay in Melbourne and are part of mapping out areas of imagery with which I could work. I was working with the idea of the meaning of the represented imagery and I was mapping out boundaries.'(1) The use of the title 'Mandala', a potent symbol in Tibetan Buddhism, refers to Johnson's interest in the possibilities of cross-cultural encounters, which later became a primary force in his work. On a formal level, these works could be read quite straightforwardly as referring to the significance of non-representational painting in the late 1960s and early 1970s and might be seen as nods to the formalist painting espoused by the American critic Clement Greenberg, who twice lectured in Sydney in 1968 and 1979. The experimental nature of these works is demonstrated not only by a broad array of visual schema, but also in Johnson's choice of materials. Some of the works are on poor-quality fragments of butcher's paper, as well as on heavier, more textured art papers. In some works Johnson has experimented with using synthetic polymer paints on paper, and sometimes metallic colours. He has also used both watercolour and synthetic polymer paint on the one work. Taken as a whole group, therefore, these paintings demonstrate the exploratory character of Johnson's practice as painter in the mid-1970s. In time this exploration across different imageries would give way to a more personal synthesis, especially the hybrid conjunctions between European and Western Desert styles of painting that he forged in the 1980s. (Fine examples of these mature works are held in the Gallery's Collection. See, for example, Acc. nos 1988.059, 1993.032a-l and 1999.134a-c.) Essay by Julie Ewington, Head of Australian Art, with additions by Angela Goddard, Curatorial Assistant, Australian Art, Oct. 2001. 1. Johnson, Tim. E-mail to Sarah Bricknell, 1 Feb. 2002. 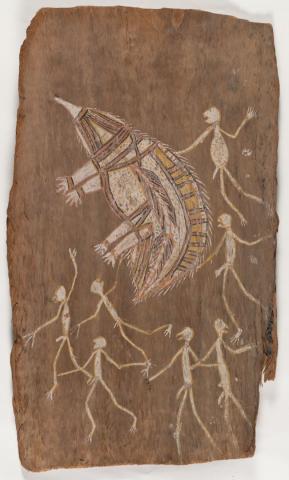 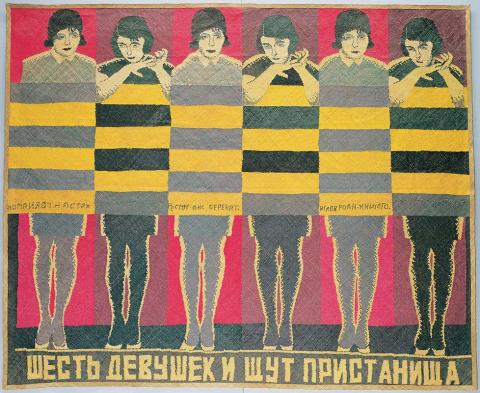 Ideology and artefact: The faltering of dreams no. 3 (from 'Fully exploited labour' series) 2001-02 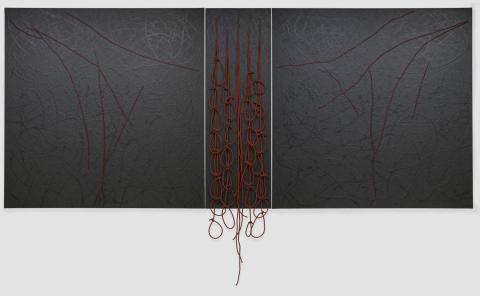