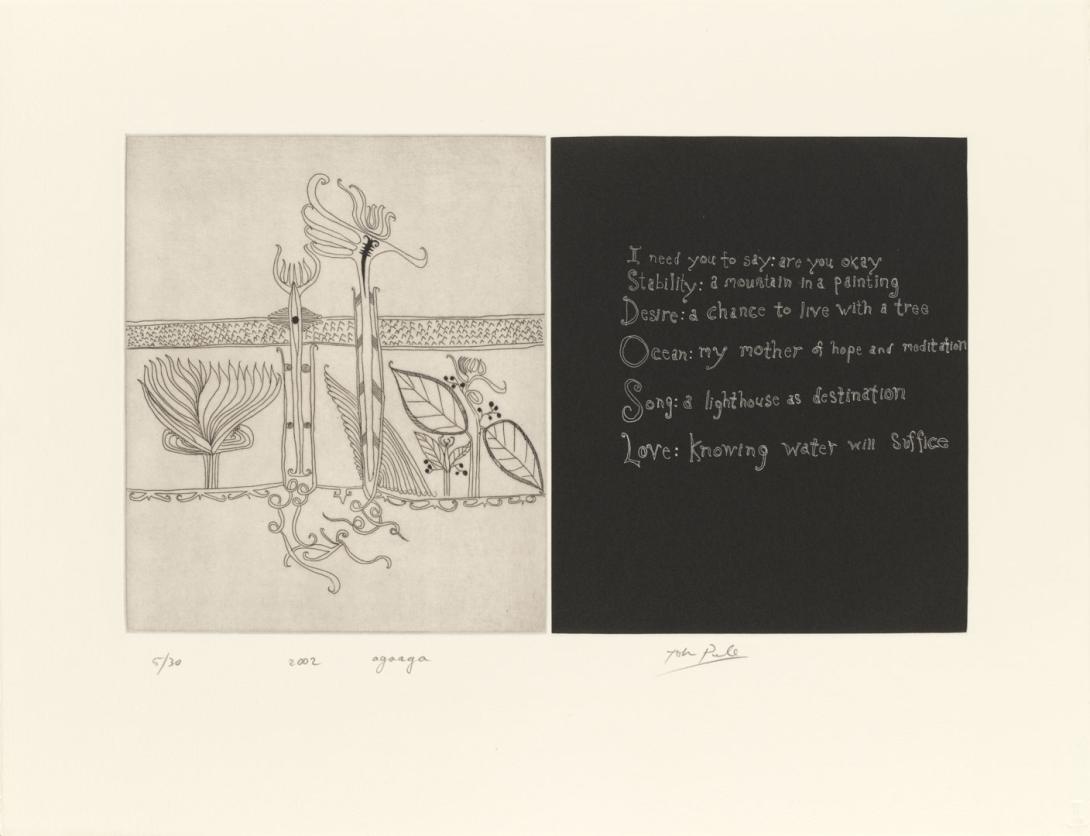 John Pule is a visual artist and writer. He began writing in 1980 after reading the works of New Zealand poets and has since published two novels: The shark that ate the sun (1992) and Burn my head in heaven (1998). He has also written volumes of poetry, including Sonnets to Van Gogh (1983), Flowers after the sun (1984), The bond of time (1998), and Tagata Kapakiloi (2004). In 2005 Pule co-authored, with Nicholas Thomas, Hiapo: past and present in Niuean Barkcloth, the first comprehensive study of the art form.

In Agaaga, Pule's interest in writing and literature is apparent in the composition of the image, which is formed of two rectangular panels, resembling the open pages of a book. This impression is confirmed by the right panel, on which Pule has inscribed a poem in his ornate calligraphy:

'I need you to say: are you okay
Stability: a mountain in a painting
Desire: a chance to live with a tree
Ocean: my mother of hope and meditation
Song: a lighthouse as a destination
Love: knowing water will suffice'

On the left panel is a flower, leaf and root design, with what appears to be the sea and an island in the background: possibly his birthplace, Niue. The twining roots refer to birth and origins; and the flowers to either, the pua flower, the national flower of Niue, or the ti mata alea, or Cordyline tree, as Niuean mythology states that the first people of Niue originated from this tree. Pule has explained that his title Agaaga refers to the spirit or the soul, while the text is modelled on Buddhist chants.

Pule views his writing, painting and drawing as aspects of the same practice. This is reinforced by the two panels. The image appears on a white background, while the poem is silhouetted on black, so that each appears as the reflection of the other. The inclusion of text within an image recalls New Zealand painters Colin McCahon and Ralph Hotere, both of whom were early influences on Pule. However, it also suggests the hiapo, the Niuean version of the Pacific tapa, or barkcloth, which often include geometric and organic designs on a gridded background, inscribed with genealogies and place names. Pule has noted:

'Images on tapa are a language very much about documentation and communication ... [Tapa] is almost writing anyway, it is a pictorial language, where flatly outlined motifs are juxtaposed in a manner that could be interpreted as text ... My paintings have the same pictographic quality of tapa, I shared the same relaxed grammar if you like, as well as the conceptual flexibility.'(1)

In Agaaga these pictographic qualities are especially visible. In much of his work Pule has developed a personal lexicon of geometric motifs and text. Agaaga is intimate and universal, expressive of Pule's own emotions and life story, and a reaction to the broader issues of colonisation and identity.