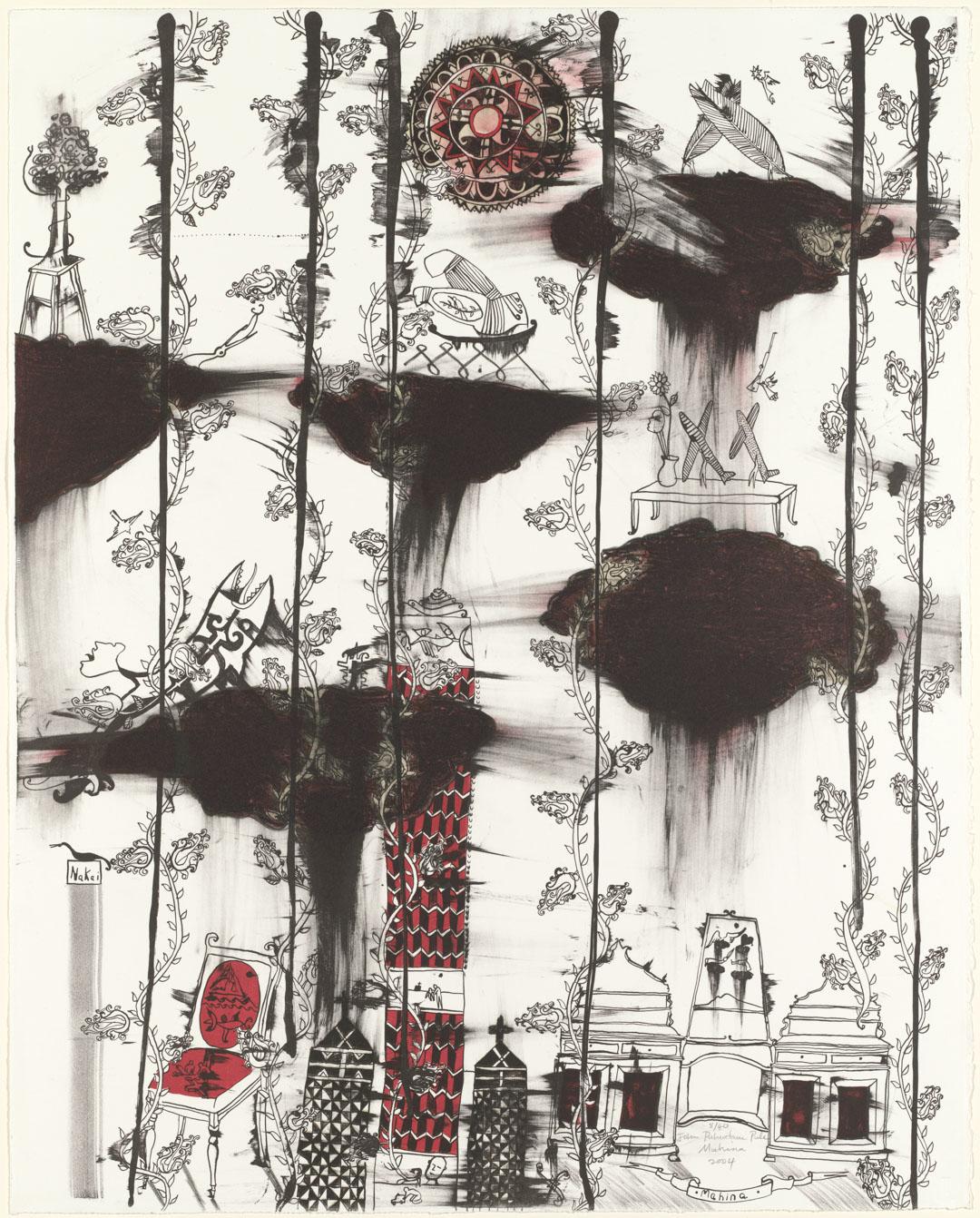 In the mid 1990s John Pule produced a number of works which departed from the more formal grid structure of the hiapo or Niuean barkcloth, of which the work Mahina is an example. In works such as Mahina, Tukulagi Tukumuitea (Forever and ever) 2005 (Acc. no. 2005.204a-c) and Kulukakina (after experiencing something miraculous, withdraw) 2004 (Acc. no. 2004.129), trailing vines, interlaced with peonies or Cordyline flowers, intersect the canvas into linear verticals, while the foreground is occupied by black or red clouds and small scattered figures and objects. These images are dense with metaphor; for example, the clouds resemble nuclear mushroom clouds, yet they also signify the realm of the spiritual and of metaphor. As Pule has said: '[my work is] very contemporary but it's also mixed. Mythology and contemporary issues are the same thing. There is really no difference. Because we are always creating and making up new things as we go along.'(1) Pule's art works also contain personal references: some refer to the death of his young daughter, while others allude to major political and contemporary issues like nuclear testing in the Pacific.

Mahina was executed in a reduced palette of red, black and white, and mixes traditional Niuean imagery or symbolism with Western objects. These comprise chairs, tables, buildings, Christian graves, a minute angel carrying a gun, bomber planes and animals such as a shark. On the title of this work, Pule comments: 'It has several meaning. Mainly known to mean the - moon -. Also means - white, ghost -. Colonised people do not know the difference between, in this context colonialism will be always forced into place.'(2)

The flowers' symbolism is twofold. Firstly, peonies were brought to Niue by the wives of missionaries, but quickly outgrew the carefully tended garden plots and merged with the native flora. Combined with the black cloud forms in Mahina, these flowers suggest conquest and violence by white colonisers. Secondly, Niuean mythology states that the first people of Niue originated from the ti mata alea (Cordyline tree). In addition, Pule's family and other Niueans brought shoots of taro and banana with them when they migrated to New Zealand, as a means of ensuring a connection to Niue. Thus, the possibilities of renewal and strength are also inherent in Pule's use of the flowers. Developing his own lexicon of geometric motifs and figurative elements, Pule's canvases and drawings explode with narrative possibilities, providing a vivid and rich image of contemporary Pacific culture.