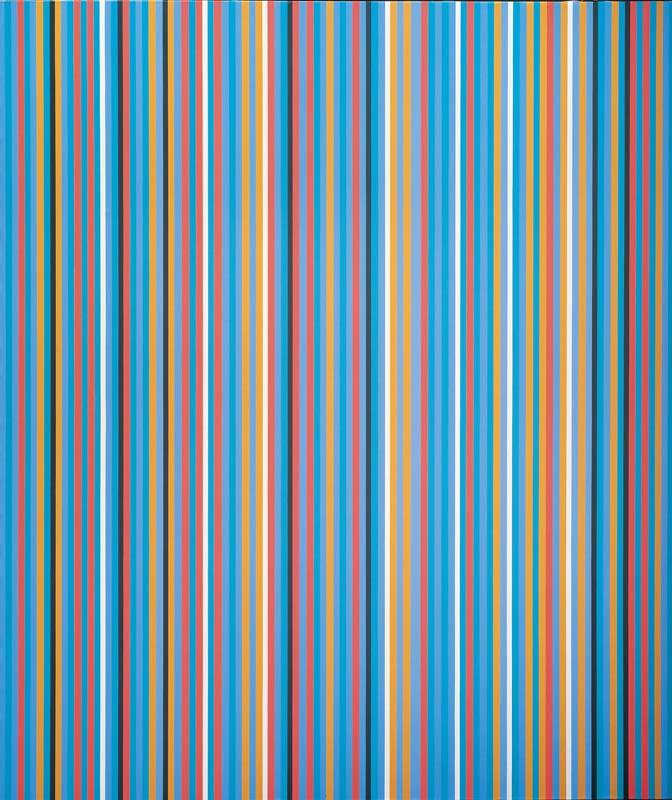 Bridget Riley was born in London in 1931. She attended the Goldsmith's College School of Art in London during 1949 and 1952 and later the Royal College of Art in London during 1952 and 1955. She has received many awards such as the International prize for painting at the 34th Venice Biennale in 1968 and a CBE in 1972. During the years 1981 and 1988 she was a Trustee of the National Gallery in London. She became an Honorary Doctor of Letters at both the University of Oxford (1993) and the University of Cambridge (1995) and was a visiting Professor of De Montford University, Leicester (until 2000) and appointed Companion of Honour in 1999. Riley lives and works in London, Cornwall, and Vaucluse, France. Riley's work is often connected with the Op art movement of the 1960s. Op (short for optical) art refers to abstract works that exploit the eye's physical response to different colours and shapes. Whereas Op art was short lived, Riley's work has continued to develop and explore the potential of colour and its relationships. 'Big blue' was painted following Riley's visit to Egypt in 1980-81 having visited the 'ancient tombs at Luxor where she was astounded at the consolidated effect of the "fabric of colour" in the well-preserved frieze paintings. A restricted palette, although 4000 years old, was fresh and perfectly harmonised, a marvellous condensation of light itself.'(1) The artist's encounter with the Egyptian landscape and brilliant Mediterranean light had a profound effect upon her choice of palette. After having returned to England, she found the Egyptian colours insistent – they had to be made. As she experimented with the colours needed to create the right group, she had a definite feeling of recognition, of having used some before in more subdued states. What was new was the degree of brilliance captured in these colours.'(2) Riley reported that what looked like being conceptually a restriction, was not. The free reconstruction of the 'Egyptian palette' gave her for the first time a basic range of strong colours - brick red, ochre-yellow, blue, turquoise - which, because of their intensity, demand a return to the simpler form of stripes. 'Colour simplified to black and white had required formal complexity. Conversely, the elaboration of colour required formal simplicity, and the most neutral of all vehicles, repeated bands, not only could carry a multiplicity of colours but also provided a doubled multiplicity of edges.'(3) 'Big blue' is made up of the four 'Egyptian colours' combined with black and white and arranged in stripes of only slightly differing widths, with the exception of one wide blue band. It is 'about' the feeling of the colour blue itself and Riley suggests that the sensation developed can be expressed best by a musical analogy. 'The blue is inflected towards either a violet or green. The painting opens, as it were, on the left with a short sharp green phase accelerating into the main violet blues of the painting and closes with a longer green passage. Each of these is interspersed with colour chords of the other two. The black acts as a strong rhythm which binds it all together and the white provides resting points. But this is a work of art to be viewed in its entirety. While language (and the musical analogy) restrict us to sequential statements, the experience of the work is different - and changing.'(4) 'Close to the work, one encounters an immaculately executed painted surface, but on moving away, any feeling of stability becomes elusive. The colour bands refuse to stay where they are. Some retreat, some jump forward; they swell and oscillate simultaneously, teasing the spaciousness and depth assured by the dominance of blue. The dual nature of Riley's palette comes into play as one stands back. Fleeting sensations of other colours appear. Is this blue the same as that blue? Are the colours the same as they were? Are there only four colours?'(5) 'Big Blue shows Bridget Riley at her best during a particularly important period in her career. She has translated the impact of Ancient Egypt into a present day disclosure of the splendours of nature.'(6) Lucy Griggs, Volunteer Curatorial Assistant, 12 Nov. 2002. 1. Harper, Jenny, in 'Bridget Riley: An Australian Context'. Riley, Bridget. Queensland Art Gallery, Brisbane, 1985, pp.10-11. 2. Ibid, p.11. 3. Cooke, Lynne and Elderfield, John. 'Bridget Riley: Reconnaissance'. Dia Center for the Arts, New York, 2001, p.33. 4. Harper, Jenny. Op. cit., pp.10-11. 5. Ibid, p.11. 6. Ibid, p.11.

Bridget Riley's work is regularly associated with Op art. Op (short for optical) was at its height during the 1960s and referred to Abstract art which explored the eye's response to different combinations of colours and shapes.

Riley is the most significant British artist to have emerged from this movement, and has rigorously continued to investigate optical effects from her first exhibition in 1962 through to her most recent shows. In her work, the viewer is not only aware of the object being looked at but also the processes of vision.

Riley's early work is characterised by its exclusive use of black and white but, in 1966, she began working with colour and subsequently introduced other elements such as curves and tonal gradations.

Big Blue 1981-82 was painted after a trip to Egypt, where Riley was inspired by the landscape's intense light and colours. The work marks a shift in the artist's practice where sensuous curves were replaced by vertical bands of solid colours, creating a radiant, visually vibrating surface. 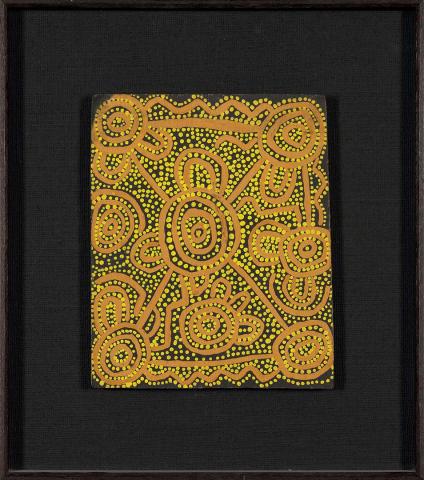 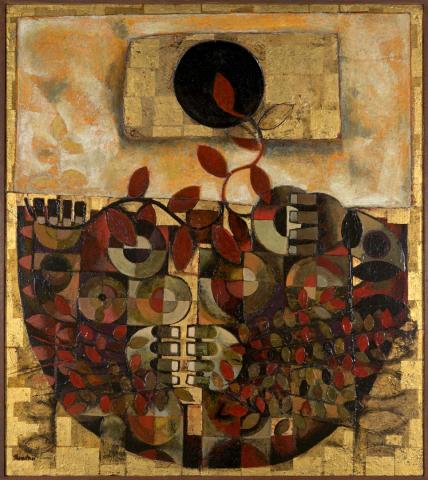 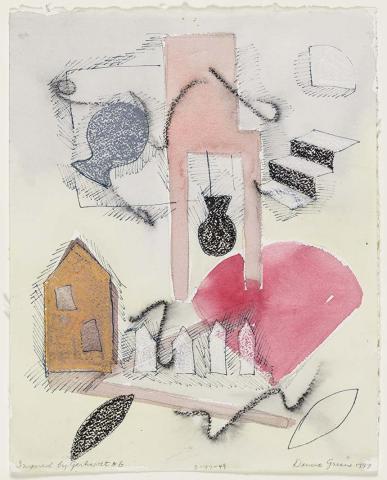 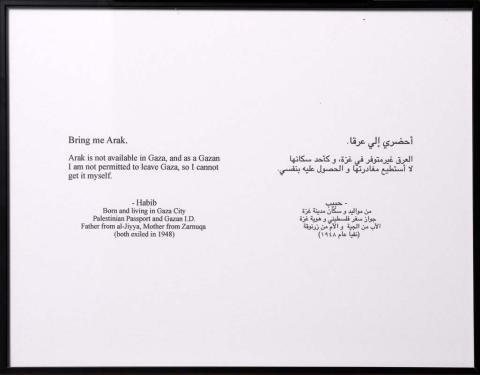