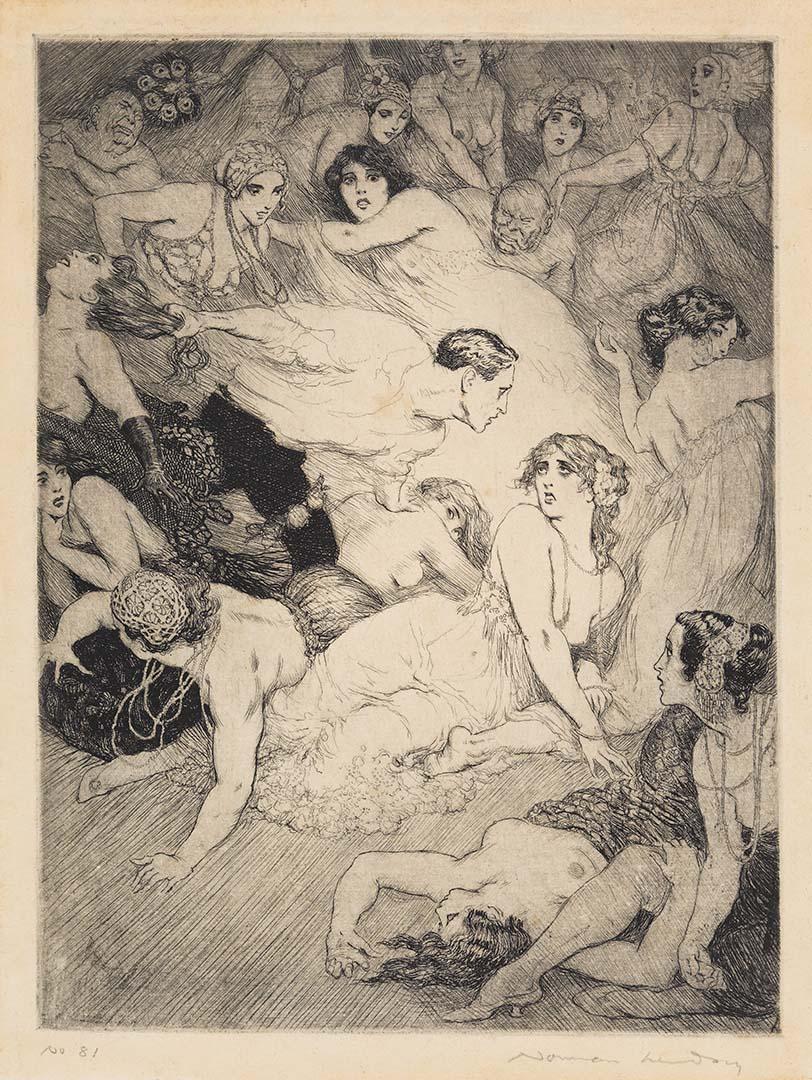 For biographical information see Acc. no. 2:0423 'Additional information'. In 1919 Sydney Ure Smith published the first article on Norman Lindsay's etchings in 'Art and Australia', the same year in which Lindsay held his first solo exhibition of etchings in Sydney and Melbourne. Predominantly drawn from mythological sources, Lindsay's etchings verge on erotic indulgences. While often barraged with criticisms of moral indecency, his works have also been praised for the freedom in their technique and subject matter. Lindsay began sourcing the Australian landscape in his early works, painting and drawing his Sydney surroundings. However immediately following World War 1, he ceased to draw influence from the Australian landscape, given his strong contempt for war. Instead Lindsay began to take mythological landscape and interior settings of Dionysian kingdoms as his subject matter, avoiding recognisable or conceivable locations. Most of Lindsay's etchings were designed and printed during the 1920s. In Greek mythology, Dionysus, or 'Bacchus', was the god of wine and vegetation. The son of Jupiter and Semele, he was raised by Nysaean nymphs. Dionysus became worshiped by many as he travelled across Asia and India demonstrating to mortals how to cultivate grapevines and make wine. Annual Dionysian festivals revolved around the adoration of this deity, frequently involving intoxicated orgiastic ceremonies and celebrations. 'Bacchus', the name given to Dionysus by the Greeks, referred to the loud outcries that accompanied his entrance to the 'mysteries'. These were ancient rituals that were only attended by a select group of educated individuals, at first only women. Around the 2nd century BC men began attending the rites, and Dionysian 'mysteries' became known as the 'Bacchanalia', where the indulgences of sex, food and wine became so extreme that the Roman Senate prohibited Bacchanalia festivals in 186 BC. Lindsay's etching 'The song' (previously catalogued as 'Bacchanal') illustrates a still moment in the throws of one such Dionysian devotion. Ecstatic women occupy the majority of the image, circling a single male, most likely Dionysus (although appearing more like a self-portrait of Lindsay himself). While the image could be interpreted as simply mythological, Daniel Thomas suggests that 'Lindsay's themes might also continue a fashion of the 1890s for portraying woman as a temptress leading man to degradation or destruction.'(1) Norman Lindsay illustrated seven books with original etchings. The etching 'The song' appeared in 'The Isle of San' (p.15) by Geon Gellert which was published in 1919 by 'Art in Australia'. An edition of 120 copies (100 for sale) were numbered and signed by Gellert. The book contained four other original etchings by Lindsay, 'The dance of innocence', 'The grey-eyed girl', 'The valley of desire' and 'Acceptance'. As Lin Bloomfield states, 'one hundred and seventy- five etchings were not put out for sale in "stand-alone" editions; that is, they were unpublished. Although the etched book illustrations were published in book form, these cannot be defined as "stand-alone" editions; and as the seven etched bookplates were either gifts or commissions, they cannot be regarded as published editions. Therefore the book illustrations and bookplates must be regarded as unpublished.'(2) Donna McColm, Curatorial Intern, Prints, Drawings and Photographs, Oct. 2000. 1. Thomas, Daniel. 'Norman Lindsay's etchings'. Angus & Robertson Publishers, Sydney, 1982, introductory essay (unpaginated). 2. Bloomfield, Lin. 'Notes on the unpublished etchings: Catalogue raisonne'. 'Norman Lindsay etchings: Catalogue raisonne'. Odana Editions, Sydney, 1999, p.29. 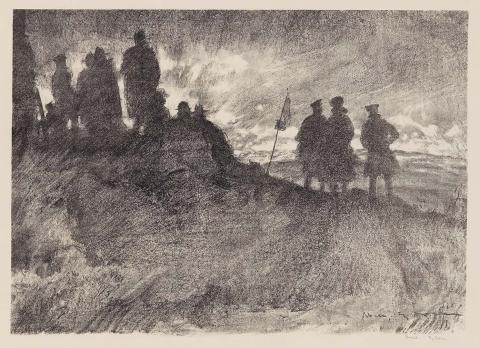 Watching the barrage from Mont Kemmel (from 'Australia at war' series) 1917, printed 1918 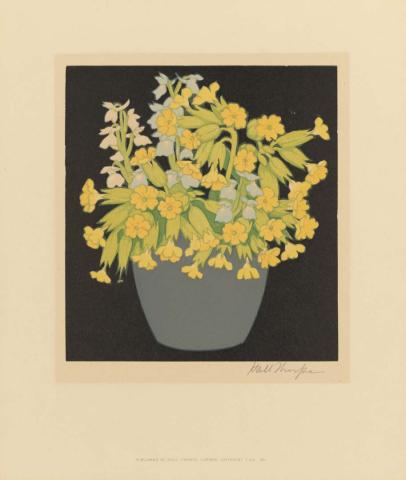 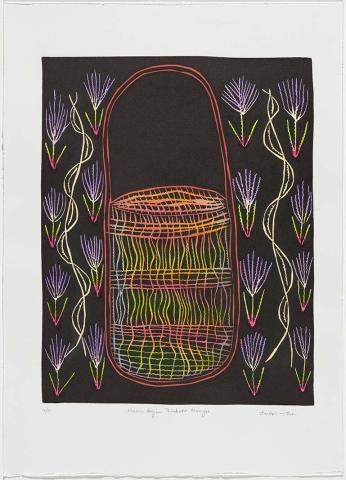 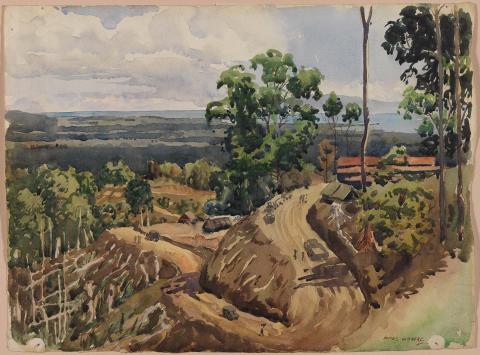 Big Road on the side of Mt. Shiburangau and looking across to Muschu Island c.1945