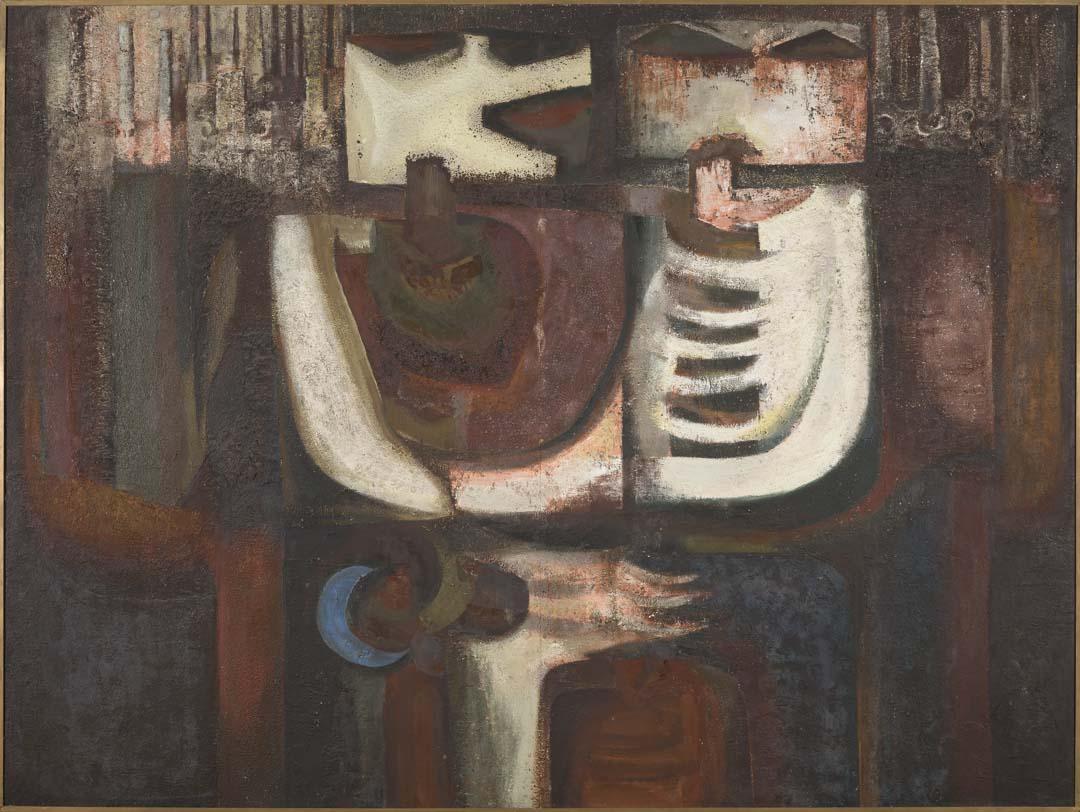 For biographical and background information see Acc. no. 1:0714 'Additional information'. Molvig's oeuvre is characterised by radical shifts of subject matter and style within a matter of a few years. His work during the mid 1950s, such as 'A twilight of women' 1957 (Acc. 1984.067), was remarkable for its expressionist savagery. (Molvig did not exhibit such work in Brisbane). His 1959 exhibition at the Johnstone Gallery, Brisbane was of paintings from his 'Centralian' series, the result of his trip to Central Australia with Maryke Degeus. In contrast, this exhibition was praised for its lyrical depiction of Indigenous people and the landscape of the interior (in works such as 'Sleeping lubra' 1958, formerly in the collection of Brian Johnstone, for example). In 1959 Molvig was taken on as the first artist in the stable of the Sydney dealer Rudy Komon and the work that Molvig had executed up until this time formed the basis of his 1960 exhibition at Komon's gallery in Paddington, Sydney. Financial security thus enabled Molvig to follow his own artistic directions unhindered. There could be no stylistic shift more abrupt than his new 'Eden Industrial' series. His imagery altered to record his recollections of Newcastle, the industrial city of his unhappy early years. The first exhibited work in the series 'Metamorphosis of Adam' was included in 'A group of Queensland painters' at Rudy Komon Gallery in April 1961. Another work in the series, 'City industrial', was awarded the first Transfield Prize some four months later. The Transfield Prize, then the richest art prize in Australia, was also Molvig's first major award. 'City industrial' exemplifies Molvig's ability to find an appropriate means of expressing both the eroded surfaces of industry and his emotional despair. This was the first work in which he experimented with blow-torching the oil paint to achieve a blistered or eroded surface. The genesis of this series was probably facilitated by the large space of his new studio at Corroboree House in Spring Hill. It was the closest that Molvig ever got to being 'in fashion' as paintings with textural surfaces were then being produced by artists such as Elwyn Lynn, William Peascod and Peter Clark. Naturally this technique, which was an attempt to establish congruence with his emotional state, was sensationalised in the press. In fact Betty Churcher, the author of the monograph on the artist, considers that '. . . in the uninviting surface of charred paint the artist has transferred his usual confrontational stance from the subject to the picture-surface itself'.(1) The first major showing of works from Molvig's 'Eden industrial' series was in October 1961 when Molvig submitted five works to the Helena Rubenstein Travelling Art Scholarship at the Art Gallery of New South Wales. These works were 'Male no. 1', 'Male no. 2', 'Female', 'Male and female' and 'The garden'. 'The garden' is the major work in the series, as it is more than twice the dimension of the other works. The works in the series, with their broad planes, simplified shapes and solid blocks of colours, are first cousins to abstraction. Roy Churcher noted in an obituary after Molvig's death in 1970 that: 'The industrial society creates its own grand forms, its oil tanks and refineries, power plants and road systems. One accepts the industrial landscape as one accepts one's own multi-formed and various entrails and excretory canals, whether or not one becomes enraptured with them. . . Their character is so positive that they can be dealt with in formal terms as with other forms, man, rock or flower, but our slinky urban lie is another matter.'(2) 'Eden industrial: The garden' is the key work in the series of paintings made between 1961 and 1962 in which the memories of his early life in Newcastle took on a particularly bleak cast. Molvig recalled: 'I come from Newcastle. The best painters come from Newcastle - Dobell and Olsen for instance - but what a terrible place.'(3) Molvig took the Biblical figures of Adam and Eve from their paradisaical Garden of Eden and placed them in a blasted, industrial wasteland. Sand was incorporated into the paint surface to obtain a grainy texture while attacking the oil paint with a blow-torch achieved a blistered, charred effect - evoking dark and brooding atmosphere. The universal figures of Adam and Eve emerge from this melancholy landscape, surrounded by smokestacks and industrial sludge with their skeletal forms, depicted in a x-ray style, portraying their utter vulnerability. Although Molvig had looked at the work of Sidney Nolan in his 'Drought' series of the early 1950s before producing his 'Carcase' paintings in the 'Centralian' series, there appears to be no palpable resonance between the mask-like faces of the 'Industrial Eden' series and Ned Kelly's armoured head. Such simplified shapes were part of a very widely-used vocabulary at that time. Molvig also used simple and dramatic shapes in other works such as 'Adam and gravedigger' (private collection) in which he portrays the gravedigger with a spade-shaped head. Essay by Glenn R. Cooke, Research Curator, Queensland Heritage, Mar. 2004. 1. Churcher, Betty. 'Molvig: The lost antipodean'. Allen Lane/Penguin Books, Ringwood, Vic., 1984, p.91. 2. Churcher, Roy. 'CAS July drawing show'. 'Newsletter'. Contemporary Art Society (Queensland Branch), July, 1970. 3. Quoted in Churcher, op. cit., p.89. 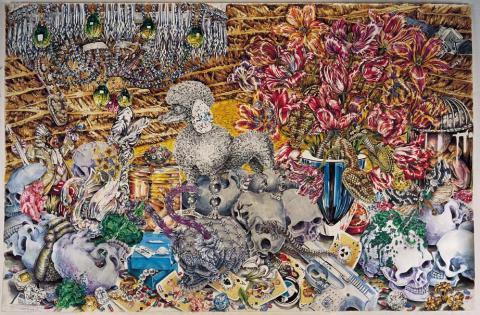 The Theory of Everything 2005 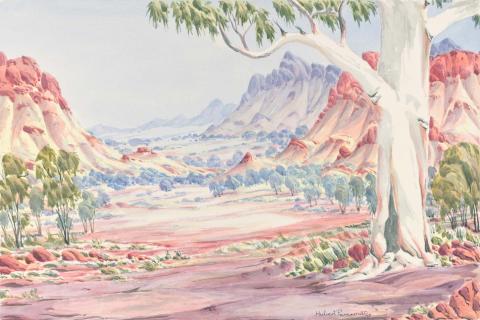 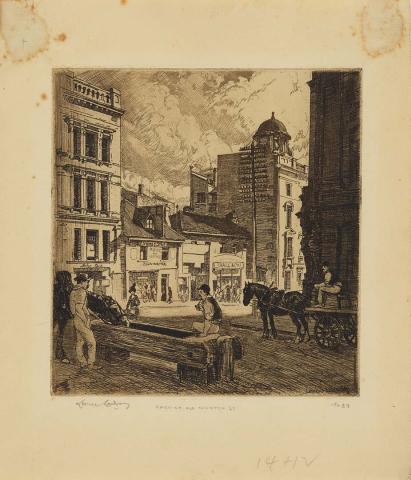 The last of Old Hunter Street (from 'Old Sydney' series) 1916 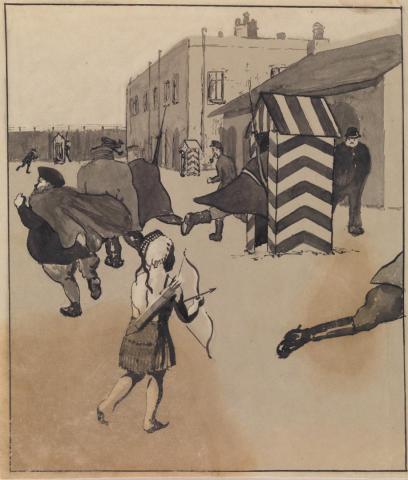 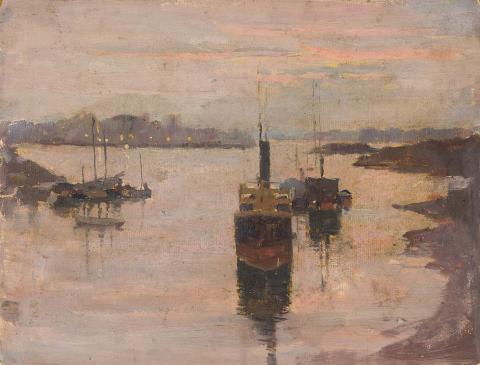