Sandra Black was born in Bairnsdale, Victoria in 1950 and moved to Albany, Western Australia in 1964. She gained a Western Australian Teachers Certificate in 1975 and an Associateship in Art Teaching from the Western Australian Institute of Technology in 1975. As Resident Graduate Craftsman in Ceramics there in 1976, she developed the porcelain work which has become her major form of expression. Since 1976, Sandra Black has undertaken many artist-in-residencies, workshops and lectures on her work. She has shown work in numerous exhibitions and held more than fifteen one-person exhibitions. She is represented in most Australian and New Zealand state and regional galleries. Sandra Black's ceramics are the result of not only an astute sense of design, proportion, colour and texture but also of an intense technical rigour. Careful testing and analysis of clays, glazes and firing methods precede each body of Sandra Black's work. Working on several series of work at the same time, she organises her time between routine preparation, designing and experimentation. Her ceramics are produced by two methods; using the potter's wheel to 'throw' shapes, or casting clay from her own plaster moulds. Both of these processes result in shapes which when semi-dry (or 'leather- hard') can be turned on the wheel to refine the form and add symmetrical decoration. Subsequent decorating processes include piercing designs with an electric drill and a scalpel. Surface decoration is painted in coloured slips (liquid clay or stains, over which glaze is applied. Other pieces are left unglazed with a lustrous surface resulting from polishing the pot with wet and dry abrasives. A Visual Arts/Crafts Board Fellowship in 1988 allowed her the time to develop her new work. The 'Timewell' series of work exploits the dramatic visual qualities of draping. At the leather-hard stage a pot is draped with fabric which has been soaked in slip. During firing, the fabric burns away, leaving only its clay 'imprint', resulting in powerful, yet delicate forms. The classical and sometimes funereal forms of these draped pots are often underscored with the use of dark coloured clays and slips. It was work of this type that gained here the prestigious Fletcher Challenge Pottery Award in 1989. Edited extract from: 'Sandra Black: Artist in Focus 6', AGWA, Perth, 1989. Sandra Black occupies an important position in the field of Australian ceramics, the persistent development of her craft and design skills creating a benchmark for excellence in this country. This piece, quite apart from her innovative technique, has a commanding funereal presence quite unlike her earlier pierced porcelain forms (Acc. nos 4:0619-21 and 4:0643). 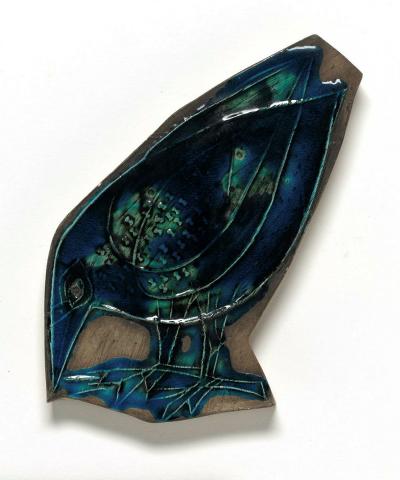 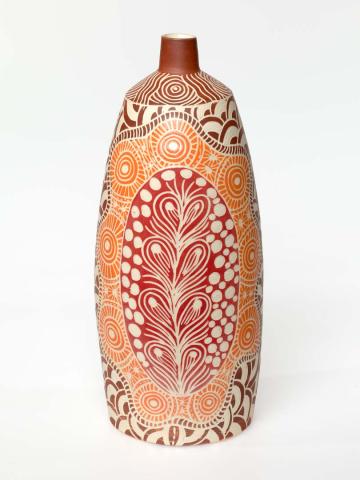 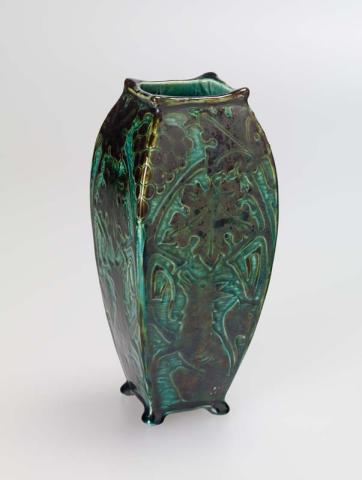 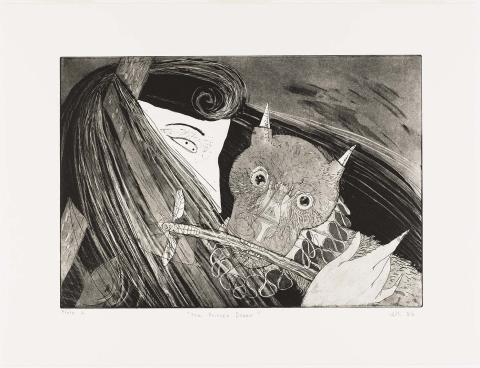 The Prince and the Bee Mistress (portfolio) 1986