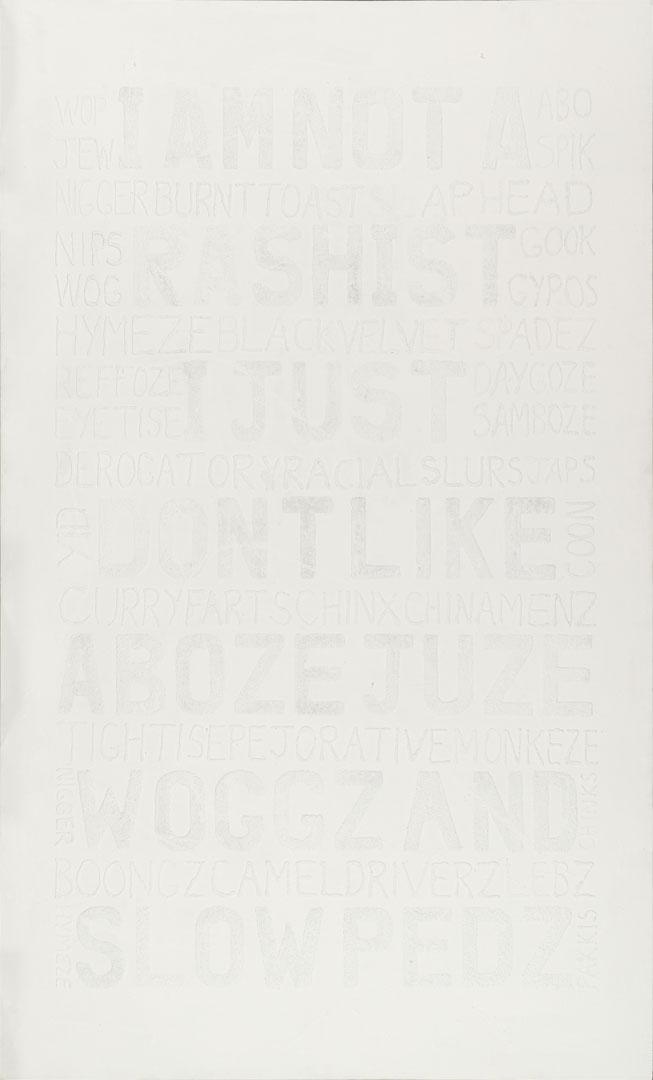 For biographical information see Acc.2014.325a- 'Essay'. Richard Bell is one of the most blatantly politically abrasive of the contemporary Queensland Indigenous artists who have achieved national profiles. His work explores both Indigenous and non-Indigenous concerns. Often his works use humour to draw attention to the issue of past government policies of assimilation and their effect on Aboriginal identity. Bell's work is often confronting and sometimes even offensive, but it compels one to re-think prejudicial attitudes and recognise racial differences. 'Aussie, Aussie, Aussie' 2002 (Acc. no. 2002.092) and 'I didn't do it' 2002 (Acc. no. 2002.093) may be hung as a pair: 'Aussie, Aussie, Aussie' is a large white painting; the smaller work, 'I didn't do it', is black. Both works feature text as imagery. Bell has used fine gravel and synthetic polymer paint stabilised with glue to create the letters which are emphasised when hung under raking gallery lights. The choice of the simple black or white paint emphasises an ironic use of the painting medium, creating black shadows regardless of the colour of paint that is used. In 'Aussie, Aussie, Aussie' the central text reads: 'I AM NOT A RASHIST I JUST DONT LIKE ABOZE JUZE WOGGZ AND SLOW PEDZ'. The surrounding, smaller text shows the following words: 'WOP JEW ABO SPIK NIGGER BURNT TOAST SLAPHEAD NIPS GOOK WOG GYPOS HYMEZ BLACK VELVET SPADEZ REFFOZE DAYGOZE EYETISE SAMBOZE DEROGATORY RACIAL SLURS JAPS YID COON CURRY FARTS CHINX CHINAMENZ TIGHTISE PEJORATIVE MONKEZE NIGGER CHINKS BOONGZ CAMELDRIVERZ LEBZ HYMEZE PAKKIS'. In much of Bell's work the artist plays with the 'Queen's English' and colonial slang, using phonetic spellings of derogatory terms. On a deeper level the works point to the elimination of Australian Indigenous languages since European settlement. The painting 'I didn't do it' has the words 'I am not sorry' constructed with gravel and black paint and centrally placed on the canvas. Surrounding this in smaller text, in repeated unbroken phrasing, are the words 'ITWASNTMEITWASNTME'. This work refers to current political debates and the reluctance of some Australian political leaders to offer an apology for past injustices to Indigenous people. Although these works appear didactic, they invite open discussion of current debates concerning Indigenous and minority groups. Visually these works are quite stunning, devoid of 'colour' as objects, yet intensely stimulating in the context of current 'colourful' debates in Australia. Essay by Avril Quaill, Associate Curator, Indigenous Australian Art, May 2002. 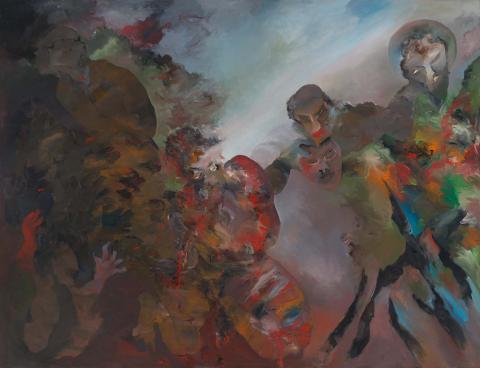 The stoning of St Stephen 1989 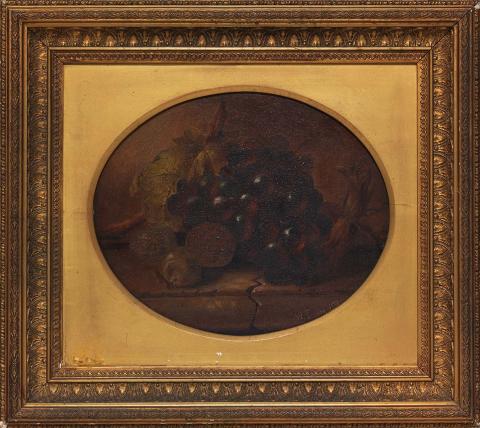 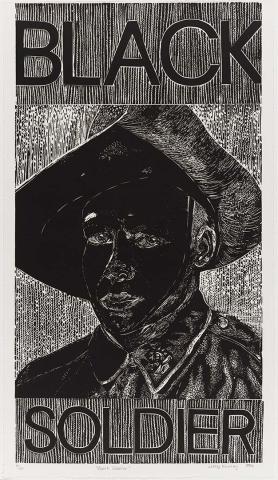 Black soldier (from 'My grandfather' series) 1994