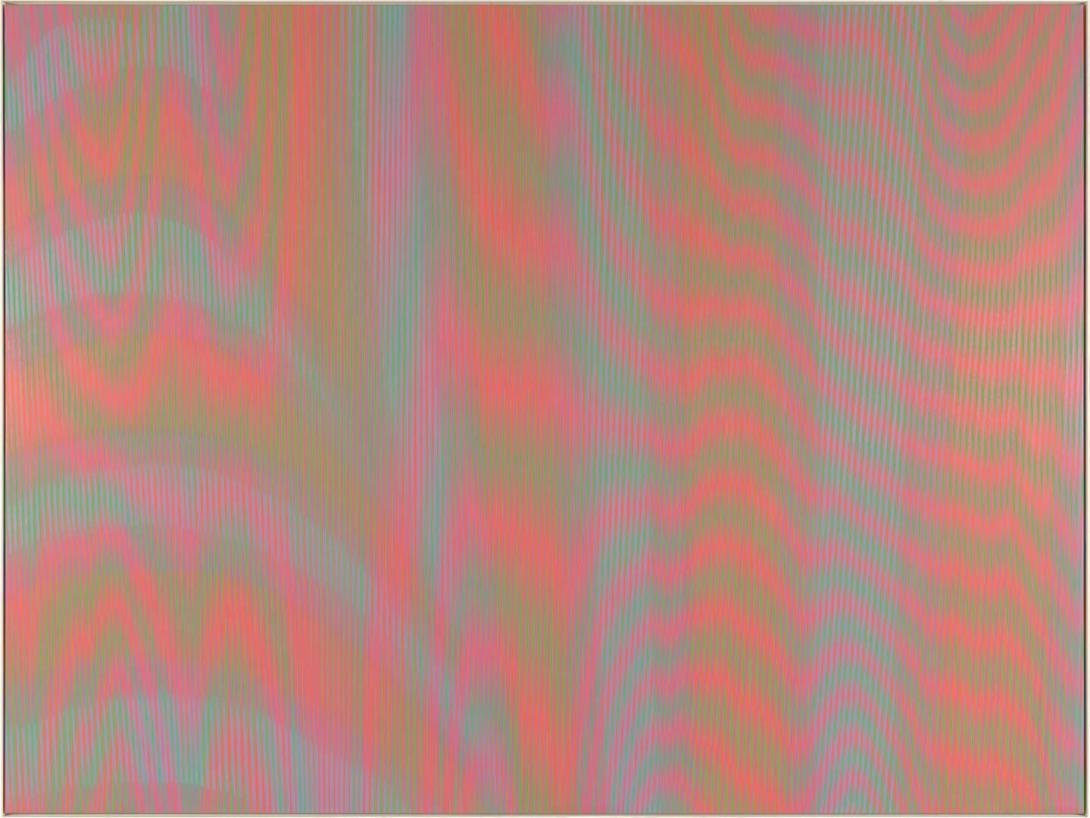 Wilma TABACCO is a mid-career Melbourne painter who has achieved a solid reputation through the consistent pursuit of a lively abstract style expressed in brilliant and often optically dazzling colour. 'Hellza poppin' is an extremely dynamic and handsome painting with an almost frenetic sense of movement. It was originally shown in 'Ave atque Vale (for now)', the artist's solo exhibition at Melbourne's Niagara Galleries in 2006, together with nine other paintings that explored the rhythmic permutations of variously coloured stripes. A second suite of paintings in this exhibition, entitled 'Dream space', was in a very different idiom, quietly exploring volume through figure-ground plays in two colours, resulting in simple restful images that resembled house plans or fragments of spatial diagrams. The conceptual rigour of Tabacco's approach to both modes of work in this exhibition is typical of her systematic approach: stripes are her key form of painterly exploration and in this, as in other recent exhibitions, she set herself to explore the interplay of adjacent colours and the almost infinite variations possible in this simple and enduring format. In this aspect of her work Tabacco is the inheritor of the study of colour relations undertaken by the German-American modernist painter Josef Albers (1888-1976), a student and later teacher at the Bauhaus who was immensely influential on post-War American non- representational painting. Like Albers, Tabacco paints in traditional oil paint. In this adherence to the older medium she is unlike the other painters of the 1960s and 1970s who were influenced by Albers, the so-called Colour Field painters who worked for the most part in the new fast-drying synthetic polymer paint. This oil medium gives Tabacco's paintings their unusual intensity and luminosity, as the layers of pigment trap light, making possible the kinetic energy of the complex moire effects in 'Hellza poppin'. Nor are the works planned or plotted by computer but they are painstakingly constructed by the artist, additional evidence of her privileging of the handmade: other paintings in this exhibition were titled for traditional striped candies and candy canes, such as Swedish polkagrisa and French berlingot. Importantly, at 183cm tall and 244cm wide, 'Hellza poppin' is taller than most viewers and encompasses the entire field of vision, even extending to the peripheral vision. This embrace of the viewer's body effects the virtual kinetic movement of the undulating stripes in the painting, introducing a distinct sense of unease. The title of the painting is the key to the meaning of this enforced rhythmic movement: 'Hellzapoppin' was originally a celebrated American musical revue, the longest-running Broadway musical of the period, running from 1938 to 1941. Its comedy hodgepodge was full of music and topical slapstick - its opening scene featured Hitler speaking in a Yiddish accent - and it was irrepressibly energetic, with a circus atmosphere including dwarfs, clowns, trained pigeons and audience participation. Importantly, the show and its various sequels, including a 1941 movie, featured Lindy Hop dance scenes: the dances from the movie are some of the best-known from the Swing Era and have made the film popular among modern Lindy Hoppers. 'Hellza poppin' is thus a by-word for physical energy expressed in music and dance, here translated into bright jazzy fluctuations of pink, yellow and blue and in shifting patterns that recall the wilder moments of 1940s be-bop in a completely contemporary painting idiom. Biographical details: Wilma Tabacco was born in L'Aquila, Italy and arrived in Australia in 1957. She received a Bachelor of Commerce degree from the University of Melbourne in 1972 and a Diploma of Education in 1973. In 1979 she undertook a Diploma of Fine Art at Phillip Institute, Melbourne, and whilst lecturing in painting and drawing at the University of Melbourne, continued her studies at RMIT, where she completed a Master of Arts in 1995. Tabacco has lectured variously in painting, drawing and printmaking at the University of Melbourne, Canberra School of Art (ANU) and with RMIT as part of its international program in both Hong Kong and in Melbourne. She has received several grants from the Visual Arts Board of the Australia Council, including a studio residency in Italy, and has also worked and exhibited in Seoul, Korea, as the recipient of an Asialink residency. Wilma Tabacco has exhibited paintings and prints consistently both in solo and group exhibitions for two decades, and her work is held in numerous major public collections including Artbank, Bendigo Regional Art Gallery, Museum of Modern Art at Heide, National Gallery of Australia, National Gallery of Victoria, Queensland University of Technology, Queensland Art Gallery, Queen Victoria Museum and Art Gallery, Launceston, and Warrnambool Regional Art Gallery. Essay and biographical details by Julie Ewington, Curatorial Manager, Australian Art, Apr. 2008. Note: acute over e in moire in 'Additional information'. 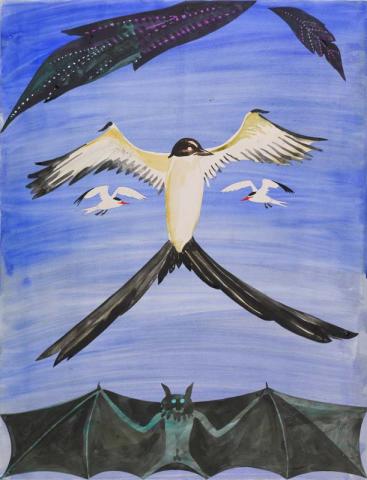 The Count transformed (from 'Liliu' series) 2007 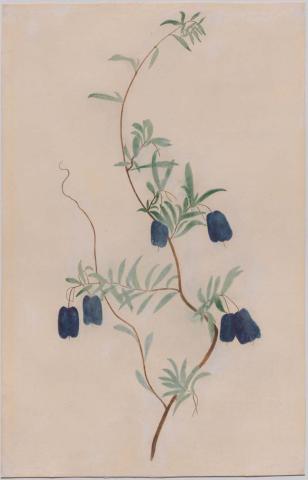 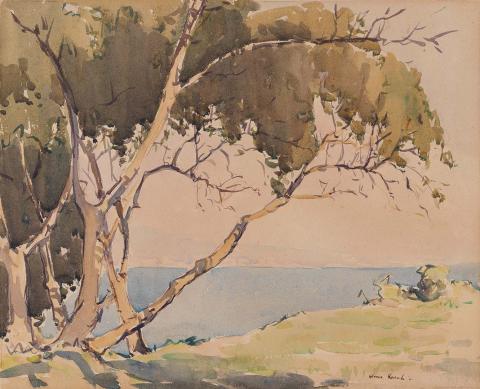 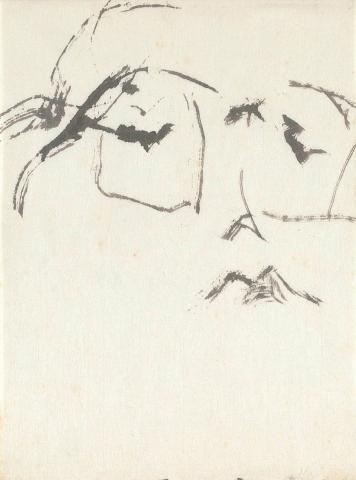 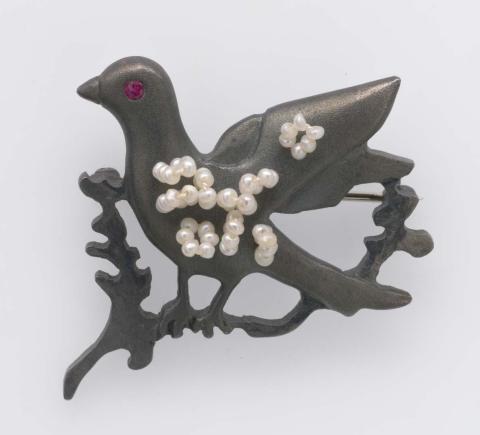