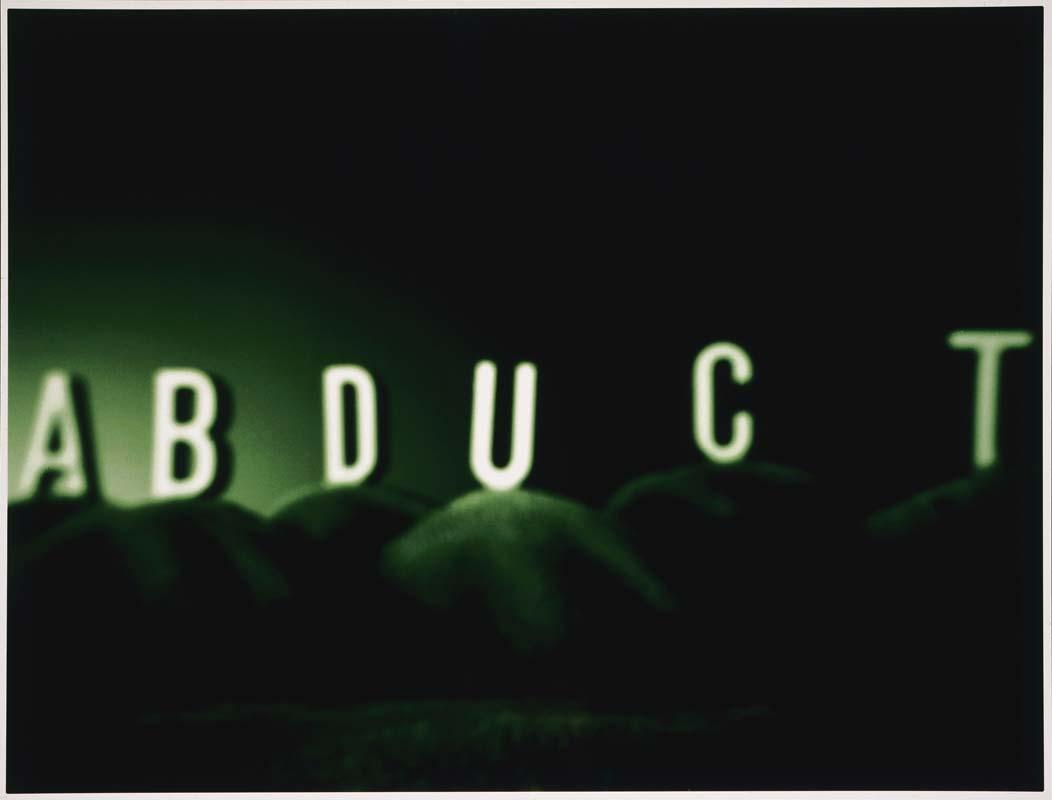 Ronnie van Hout was born in New Zealand in 1962 and currently resides in Berlin, Germany. In 1980 he studied at the Ilam School of Fine Arts, Canterbury University, where he majored in Film studies. In 1999 he received his Masters of Fine Arts from the Royal Melbourne Institute of Technology. He was an artist in residence at the ELBA Art Foundation in Nijmegen, the Netherlands, in 1994, and at the International Studio Program at P.S.1 in New York, USA, in 1999. A mid- career and important New Zealand artist, he has risen to prominence through his participation in numerous exhibitions. Selected solo exhibitions include 'I've abandoned me', Dunedin Public Art Gallery, Dunedin, 2003, touring New Zealand; 'Only the only', AGNSW, 2001; and 'Am I talking to me?', P.S.1, New York, USA, 1999. Group exhibitions include the 'Walters Art Prize', Auckland Art Gallery, Toi O Tamaki, Auckland, New Zealand, 2004; 'The Tomorrow People', Lord-Mori Gallery, Los Angeles, USA, 2002; and 'Toi Toi Toi: Three generations of artists from New Zealand', Museum Fridericianum, Kassel, Germany, 1999. Van Hout is represented in numerous collections, including AGNSW; AGWA; NGV; the Auckland Art Gallery, Toi O Tamaki, Auckland, New Zealand; The National Museum of New Zealand, Te Papa Tongarewa, Wellington, New Zealand; and the Los Angeles Museum of Contemporary Art, Los Angeles, USA. Van Hout is notorious for his irreverent and satirical engagement with New Zealand culture. He has been called 'a rabid browser', whose 'work feeds off the prevailing zeitgeist-appropriation, film, model photography, abject art, loser art, XFiles art'.(1) This wide range of interests has allowed van Hout to explore an array of media including installations constructed from ready-made objects, plastic models, video, sculpture, painting, photography and even embroidery. Much of van Hout's practice reflects personal musings and is addressed through a number of unusual projects including videos of life-sized, latex chimpanzees drunk at the bar, playing guitar or spewing yellow gunk. These chimps are undoubtedly alter-egos, variously questioning the role of duplicity, humour and popular culture in society today. Far from producing self-indulgent works, van Hout laments 'I can't fulfil the promise of previous generations, I cannot fulfil the concept of myself as a "genius artist"'. He adds '...the more I work as an artist the less I like my work to have any effect. I want to get more and more away from meaning if I can'. He reinforces these comments by referencing the work of key art figures, including Andy Warhol, and states that 'Duchamp recognized that modernism was a farce from the start and how the idea of trying to be original was silly and meant nothing'.(2) For this reason, van Hout is more interested in exploring humour as a tool that communicates indirectly, 'the way that a joke plays with language to communicate some cultural or social value...'.(3) The three works, 'Abduct', 'Hybrid' (both from an untitled series) (Acc. nos 2004.293 and 2004.295), and '"after Peryer"' (Acc. no. 2004.294) collectively illustrate key elements in van Hout's practice. They continue the artist's preoccupation with language and its satirical possibilities. The photographs appeared in the AGNSW exhibition, 'Only the only' in 1999 and featured photographs of monumental-looking letters variously emerging from a dark, mountainous landscape, as well as a new media work. Works imaging the words 'Stranger', 'Creature' and 'Monster' accompanied 'Abduct' and 'Hybrid'. It is, however, in these last two prints that van Hout's wit excels. The words in the landscape strongly reference New Zealand's pre-eminent modernist painter Colin McCahon, but the Cartesian introspection of McCahon's works like 'I am' 1954, is replaced with words van Hout considers to be more current and less indulgent. The letters 'Hybrid' for example, creep out of the green terrain, looming large, but also half hidden, replicating the confusion that this concept has reaped in cultural studies. In '"after Peryer"', van Hout pays homage to the senior New Zealand artist Peter Peryer who is also represented in the Collection (Acc. no. 1996.188). Reverting back to childhood images, he blends genocide, toys and horror while also alluding to his parents' own escape from war-torn Europe. These three works also primarily reflect van Hout's interest in film. They bring together his passion for B-Grade science fiction alongside that of 1960s and 1970s television series and set designs dealing with outer-space experiences. In particular, the works take their cue from the 1959 cult movie 'Plan 9 from outer space' by director Ed Wood, in which the Hollywood sign is seen artificially dangling as a backdrop with the strings visible. Just as van Hout's first major student work was a Super8 film jesting with Andy Warhol, for this edition, the artist has chosen the mostly outdated medium of Lamda prints. As well as having a filmic quality, these images deal with another van Hout lure, that of war and violence. The prints appear as if seen through an 'invading soldier's night-vision goggles', the presence of the swastika on what could be either a child's model airplane or a recycled photograph, alludes to van Hout's Dutch parents who came to New Zealand fleeing World War Two.(4) The artist also confesses to an interest in 'fascism and how images have power', as well as an attraction to the Nazis' 'romanticised aesthetics' and how ideals of 'heroism and defeat' speak to our contemporary society.(5) These three images allow for a multitude of readings on New Zealand popular culture, from migrational patterns to celebrated cinematic achievements, and form valuable juxtapositions with other artists in the Collection such as Michael Stevenson, Michael Parekowhai and Peter Peryer. Essay by Maud Page, Curator, Contemporary Pacific Art, Nov. 2004. 1. Leonard, Robert. 'Overimpressed'. 'Art/Text', no. 57, 1997, p.32. 2. Van Hout, Ronnie, quoted in Neate, Robin. 'The king of comedy. The cinema, Cezanne, Nazis and sausages'. 'Midwest six', 1994, p.24. 3. Ibid. 4. Paton, Justin. 'Ronnie van Hout: I've abandoned me'. Dunedin Public Art Gallery Press, Dunedin, New Zealand, 2003, p.36. 5. Op cit., Neate, Robin, 1994, p.26. 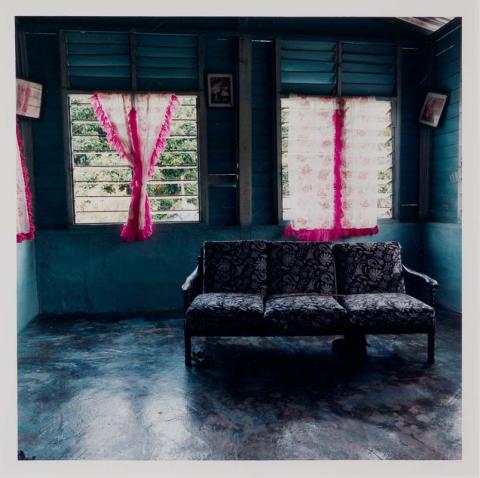 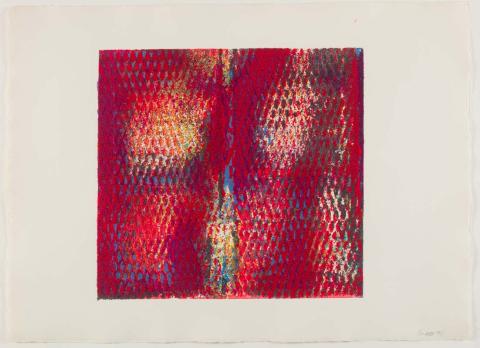 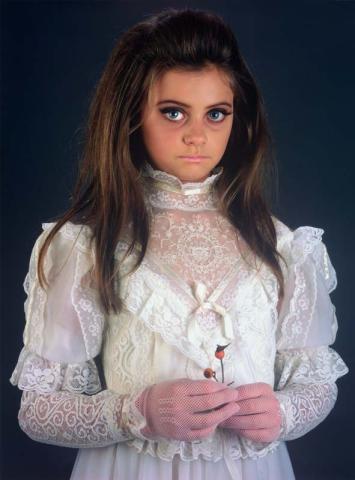 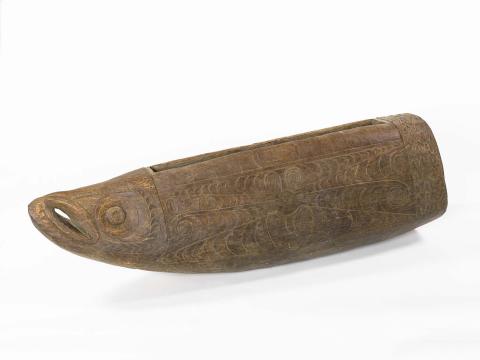