Ay-O's work, Purple night (from 'An anthology of shunga' portfolio), shows his characteristic use of the rainbow. He has used this device since 1964 and it is suggestive not only of the changes that visual perception can endow, but also of the changes that occur to visual reality when viewed through a lens, in this case a prism. In the anthology, Ay-O depicts people and animals in the midst of love-making, their figures built from gradations of bright colour. Ay-O's particular interest in contours is rendered through his use of layers to convey form.

The rainbow permeates all areas of Ay-O's artistic practice, creating pieces that embrace a complete manifestation of possible colour. He has stated, 'My work has come to feature the phenomenon known as the spectrum or the rainbow, because I have always felt that, since there are colours in the infra-red and ultra-violet range that human eyes cannot perceive, a work of visual art should attempt to employ as many colours that we can perceive as possible.'(1) 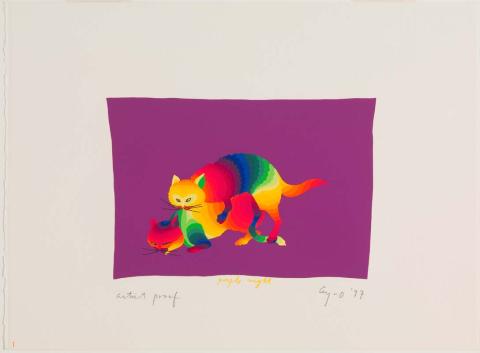 Purple night (from 'An anthology of shunga' portfolio) 1997