The painting Red Shift includes a rock cliff face alongside which birds soar or are sucked into a dark vortex, the sheer presence of this vertiginous work is disquietingly powerful and affecting. The painting marks a departure from Shane Cotton's energetic and segmented narratives and return to landscape and figuration. In 2005, the use of text remained and was applied to decipher historical characters, or to signal the title within the work. A most prevalent image from this phase is that of an abstracted Maori tattooed head, the mokomokai, radiating out of a dark background from which birds and foliage hover. Cotton says the 'inclusion of birds in relation to the head also recalls the importance of the avian symbol in Maori carving and the convention of "manaia", as an intercessional being of transformative power.'(1)

Red Shift features nine birds poised in mid air alongside an intricately rendered cliff face. An ominous airbrushed dark sky fills most of the canvas and suggests an imminent storm. Contorted birds fly in a circle formation giving the illusion that they are either soaring up high or being sucked down into a void. Writer and curator Christina Barton has said, 'I am left looking, suspended between darkness and light, life and death, stillness and flight.'(2)

Cotton says of the work: 'it is the edge that fascinates me, both physically and psychologically.'(3) A result of this interest is the effect of the rock cliff face with its visible application of paint and its stark contrast to the almost transparent use of the air-brush delineating the sky. Cotton cites American artists Brice Marden and Ed Ruscha’s more recent work, particularly their graphic clarity, as influences.(4)

Cotton works in Photoshop to distort and accentuate the illusion of movement in the bird’s bodies and wings, exaggerating their suspension and creating visible tension. The birds are nondescript, sourced from different locations around the world. Similarly the rock has no New Zealand locality: it is taken from images of the Grand Canyon in the United States. It is difficult not to search for a New Zealand connection in view of Cotton's past works which were so visibly linked to landmarks important to his iwi (tribe). The artist no longer needs to signal his Maoriness through recognisable symbols. Cotton has explained elsewhere that Maori cultural sources are still within his work but have become 'naturalised', making his work appear indistinguishable from other contemporary artists.(5)

In Red Shift, Cotton continues to draw on the idea of 'transformation', 'this ever-present notion of flux, change, adaptation and alteration', that is so prevalent throughout his practice.(6) This concept exists in much of Cotton's own tribal lore. He cites the story of Taiamai, a great bird that arrived in the artist's region of Northland a long time ago. This bird brought so much mana (power) to the people that a rival chief attempted to capture it, but the bird escaped by melting into the rock where its spirit remains. In referring to the importance of 'transformation' Cotton has often used the story of the demi-god Maui and his attempt to kill Hine-nui-te-po, the Goddess of Death. Maui transformed himself into a worm in order to enter the Goddess. He had brought with him a number of birds who upon seeing him almost inside the Goddess, started to laugh, waking her and causing his death. Red Shift is not a visual rendition of these important stories, yet their reference is undoubtedly a part of the work's intense presence. The darkness and palpable tension within this painting are explained by the artist as being an attempt to come to terms with his own sense of adrift-ness caused by a sentiment of cultural loss and uncertainty. Hence, his choice of title, Red Shift, which in astronomy refers to the way the colour of galaxies change to red as the universe expands and moves away from us.

1. The manaia is a Maori mythical being with a bird's head and a human form. Quote from Cotton, Shane. Trans-Former, keynote address for the AAANZ conference, Power Institute, Sydney University, Sydney, November 2005.

4. Cotton in conversation with Page. 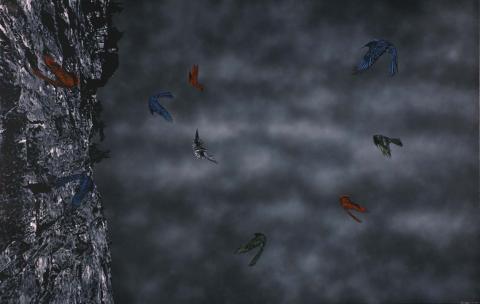