Cai Guo-Qiang's gunpowder project for the 'Second Asia-Pacific Triennial of Contemporary Art' at the Queensland Art Gallery in 1996 was to be one of the most ambitious site-specific art projects mounted in Australia, comparable with Christo's (in)famous wrapping of Sydney's Little Bay (1969). Inspired by the commonalties of the Australian indigenous Rainbow Serpent and the Chinese Dragon, Cai planned to use the Brisbane River as a conceptual metaphor and physical location for this explosive work, drawing on principles of ancient geomancy. What eventuated was Dragon or Rainbow Serpent: A myth glorified or feared, which includes the planned explosion, nine large gunpowder drawings, and an extensive group of plans, maps, test drawings and photocopies that were displayed in the Gallery. The explosion, which was unrealised, was to involve igniting 18 000 metres of explosive fuse winding along and through the Brisbane River, the adjacent freeway, bridge structures and riverbanks. The spectacular event, timed to last approximately four minutes, was to be captured on film and in still photographs, and displayed in the Gallery for the duration of the Triennial. Unfortunately, due to a disastrous fire at the fireworks factory, the explosion on the river, planned for the evening of 28 September 1996, could not be realised.

Cai's work is characterised by his commitment to the spiritual role of the artist. His work is propelled by his belief in this expression of human spiritual life and refers to particular connections which acknowledge the importance of maintaining the sources of spiritual life. He believes in the role of the artist as being able to express inspirational and cathartic gestures for a larger community. The work planned for the Brisbane River thus had this momentous celebration of the connections between the Rainbow Serpent and the Chinese Dragon.

Complementing the planned explosion are nine gunpowder drawings titled, Dragon or Rainbow Serpent: A myth glorified or feared (drawings). These were created by detonating gunpowder charges on paper which resulted in a residue of ash and scorch marks, recalling the calligraphic forms of traditional Chinese ink drawings. These drawings are intrinsic to the conceptual integrity and complex process of Cai's explosive works. 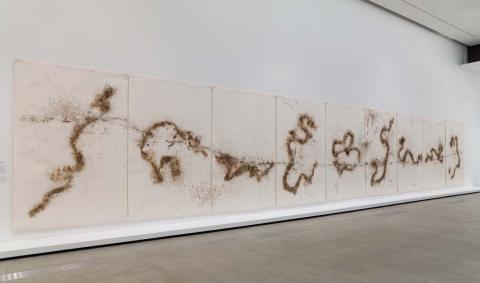 Nine Dragon Wall (Drawing for Dragon or Rainbow Serpent: A Myth Glorified or Feared: Project for Extraterrestrials No. 28) 1996