Shoot point 1967, whose acquisitoin was generously supported by James C. Sourris AM, is a major work from a pivotal point in Peart's career, writes Angela Goddard, and an important addition to the Gallery's holdings of 1960s Australian painting.

John Peart displayed remarkable artistic talent from very early in his life. Born in Brisbane in 1945, Peart commenced his studies at the Brisbane Technical College in 1962 — his only formal training — and left for Sydney to pursue his career the following year, while still a teenager. By 1965 he had held his first exhibition at Watters Gallery in Darlinghurst, where he continued to show throughout his career. As he explored various styles and approaches, Peart maintained an unwavering focus on abstraction. His move to Sydney coincided with an increasing public and critical appreciation for colour field and geometric painting, and he brought an individual approach to various modes of abstraction.

During the late 1960s, Peart's work became increasingly refined and monochromatic. His interest in Minimalism and painted objects grew and this striking shaped canvas, Shoot point 1967, can be attributed to this brief period, which lasted for only a few years. Shoot point and the other six works in the series were shown together at Watters Gallery in 1967, and all depended upon a central triangular canvas to which three parallelogram extensions propelled outwards in an angular Y formation. Each was painted in a single flat colour, including pink, yellow, blue, orange and white, which added to their pronounced physicality and energy. A selection of these important works was recently brought together at Charles Nodrum Gallery in Melbourne. In 2004, Peart described the thought processes behind his excursion into shaped canvas works:

'. . . the canvas could be stretched over any kind of shape and became a painted object rather than a flat surface. I felt I was dealing with a reality of space and volume rather than illusions of depth. Illusionistic space is inevitable with paint on a regular flat surface'.1

In 2004, curator John Stringer wrote: 'In design, these works continued to explore the centrality, radial dynamic and sense of rotation that characterised his previous paintings'.2 However, Shoot point is unique within this brief series as it also indicates a direction towards Peart's subsequent group of works, which also engaged with Minimalism and came about, as he described, from 'the need to clear the decks'.3

Shoot point was included in the artist's 2004 retrospective touring exhibition and his encounters with Minimalism were discussed in the catalogue by John Stringer, who suggested: Peart's mature work has to a great extent been disciplined, clarified and conditioned by his early encounters with the rigours of Minimalism.4 The series of works exhibited the following year, from which Cool corner II 1968 (AGNSW collection) and Corner square diagonal 1968 (NGV collection) were selected by Stringer and Brian Finemore for inclusion in the renowned National Gallery of Victoria 1968 exhibition 'The Field', also exhibited an interest in rotation around a central axis, but returned to the square canvas format and retreated from colour in favour of gradations of white, suggesting a radiating light from within. Following his inclusion in 'The Field', a watershed exhibition of Australian abstract painting, Peart secured several major art awards and grants, enabling him to travel to New York and then on to England, where he remained for six years.

Peart's exposure to Abstract Expressionism while overseas charged his work with a new pictorial energy, and the period spent in England was one of assimilation and resolution. Returning to Australia, Peart taught painting at the National Art School, Sydney from 1978 to 1986 and later between 1993 and 2002. Peart was among a group of artists, including Roy Jackson, Joan Brassil and Elisabeth Cummings, who lived and worked on a 25-acre block of land bequeathed to them by Barbara and Nick Romalis in the 1970s in Wedderburn, near Campbelltown, in New South Wales. In 1997 he won the Wynne Prize and later in 2000, the Sulman Prize.

Shoot point is a major work from a pivotal point in Peart's career and is an important addition to the Gallery's holdings of 1960s Australian painting, complementing not only other shaped canvas works such as Tony McGillick's Arbitrator 1968 and Normana Wight's Untitled yellow-green 1970, but also the cool subtlety of Robert Hunter's white paintings. The acquisition of this major work acknowledges and honours the life and work of this esteemed artist, who passed away suddenly in October 2013. 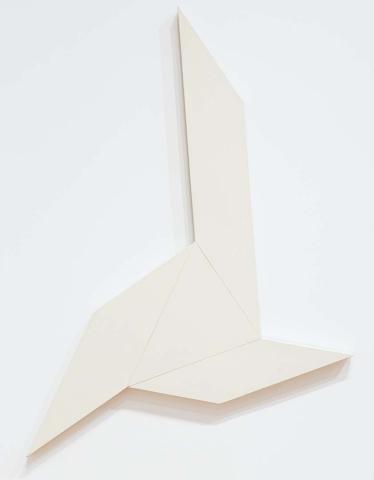