Aberhart's photographs take inspiration from his surroundings and New Zealand heritage. His work addresses Christianity and themes concerning belonging and are reminiscent of New Zealand histories, often portrayed with a sense of distance that recalls the work of Walker Evans or Dorothea Lange. It is this distance that perhaps calls into question the perplexities of both cultural and Christian beliefs. In this respect photographs such as Midway Beach, Gisborne, 13 May 1986 become records of cultural history.

Aberhart has described himself as 'an eclectic collector of cultural debris, as it washes up, and before it disappears'.(1) During the 1980s he photographed church exteriors around Northland, New Zealand. The results appear in works such as Angel over Whangape Harbour, Northland, 6 May 1982 (Acc. no. 2000.184), where the remains of past colonial histories are tied up in the symbolism of Christianity. Here the subtle movement of time, which artist Gavin Hipkins speaks of, is illustrated in the stillness of the work.(2) In Midway Beach, Gisborne, 13 May 1986 the statue dominates the landscape below.

Maori symbolism is retained by Aberhart in many of his images. 'Te Waiherehere', Koroniti, Wanganui River, 29 May 1986 (Acc. no. 2000.186), for example, appears to capture a whole history of colonisation in New Zealand culture. The artist's technique of black and white photography masks the ambiguity and historical importance of the scenes he has documented by making them initially appear in the guise of snapshots. Works such as Nature morte (silence), Savage Club, Wanganui, 20 February 1986 (Acc. no. 2000.185) are telling of their history, once this familiarity has vanished. Aberhart's continuing interest in documenting the silent remnants of colonisation is apparent in the stark carving of the word 'silence': a carved statue with open mouth dominates an almost empty room. 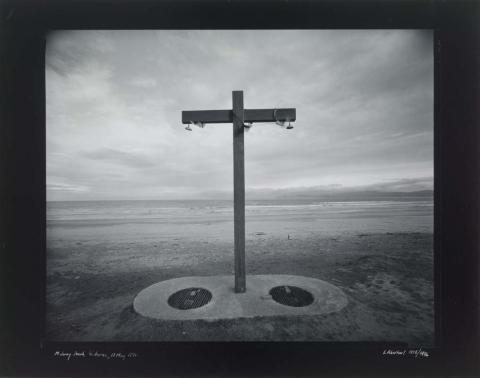