Leang Seckon’s autobiographical-driven practice reflects on his direct experiences of the turbulent and violent modern history of his country. Born in Pier Reang, Prey Veng province, Cambodia, in 1974, at the onset of the American bombings of Indochina, he is one of the few artists working today who directly experienced Pol Pot’s brutal and notorious Khmer Rouge regime, which was followed by the Cambodian-Vietnamese War (1978-92). His childhood was marked by bombings, famine, state executions and mass genocide, until the overthrow of Pol Pot and an eventual peace agreement in 1991. Throughout this period, Cambodians endured decades of violence, civil rights abuses and injustice, which deeply affected the population on every level. Official accounts estimate that more than 1.5 million out of a population of 7 to 8 million Cambodians died from starvation, disease, overwork and execution in detention centres. Pol Pot died in 1998 without ever being brought to justice.

Indochina 2014 is a recent painting that explores the intersection of history and traumatic memory, using indigenous, mythological and contemporary symbols. ‘Indochina’ was the name given to three countries in South-East Asia - Cambodia, Vietnam and Laos - under French colonial rule. This lush, densely painted work features collage and decorative elements built up against a tapestry-like background. It draws on a myth about the creation of the Cambodian Khmer Empire and juxtaposes historic images of Cambodia’s kings, of flowers and trees, scaled serpents devouring each other, wrestling figures, Hindu and Buddhist idols, and the flowing Mekong River (itself a symbol of the complex interweaving of cultures and histories).

Indochina belongs to a body of work exhibited in Leang’s second solo exhibition at Rossi and Rossi Gallery in London in 2014, entitled ‘Hell on Earth’. The title of the exhibition was drawn from the Buddh Damnay, a sacred Buddhist text, which the artist believes is indicative of the Cambodian psyche. The popular nineteenth-century text predicted that:

War will break out on all sides . . . blood will flow up to the bellies of elephants; there will be houses with no people in them, roads upon which no-one travels; there will be rice but nothing to eat.(1)

The Khmer Rouge period was, for many Cambodians, literally ‘hell on earth’, and the text found resonance with the survivors as it placed the events within the cyclical pattern of Buddhist history.

For Leang, the use of traditional symbols or motifs such as those in Indochina is important. He believes that the survivors of the war era in Cambodia have been thrown into a rapidly developing society, which has not allowed them time to reflect on their past and how it has affected contemporary life and society. While he references the Khmer Rouge period, he also reflects on the impact of development and modernisation, on both the environment and the individual. In paintings such as Indochina, this combination of symbols, history and personal reflection allows him to come to terms with a traumatic collective past.

Indochina will feature in APT8 in November, and contributes to the Gallery’s strong representation of the leading figures in contemporary Cambodian art such as Svay Ken, Sopheap Pich and Vandy Rattana, who featured in APT6. 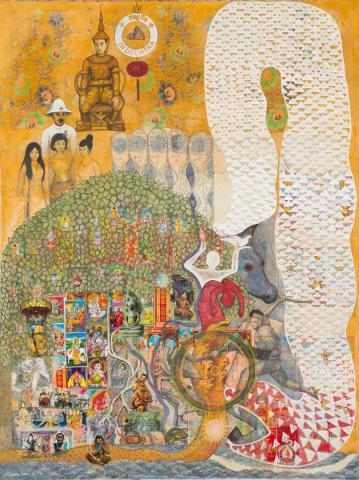