David Medalla is a unique figure in the history of twentieth-century art. His unpredictable, playful, collaborative and open-ended approach to art-making has made his work difficult to categorise, as has his resolutely independent and peripatetic nature. However, his important role in the development of kinetic and participatory art is being increasingly recognised, and he has participated in a number of influential exhibitions around the world.

Born in Manila in 1942, Medalla was a brilliant student, gaining a place at Columbia University in New York in the mid 1950s before travelling to Paris and London, where he created his first performance works as well as holding exhibitions of his paintings. Settling in London in the early 1960s, Medalla co-founded Signals, an artist-run gallery, as well as editing and designing its bulletin. The gallery became a centre of avant-garde art of the time, exhibiting works by kinetic artists Takis and Jesús Rafael Soto, and those of leading Brazilian artists Hélio Oiticica, Lygia Clark and Mira Schendel, who had a profound effect on Medalla’s own work. In 1963, he began to produce what have become his signature works, the ‘bubble machines’. Other renowned works include A Stitch in Time 1967-ongoing, featured in Documenta 5 in 1972, which invites gallery visitors to stitch messages and objects onto a bolt of fabric; and Eskimo Carver 1977, which involves the audience creating knives out of found materials to build an accumulative installation.

Medalla has described his bubble machines as a way to give ‘tangible form to invisible forces . . . to find a model which would show the transformation of matter into energy’.(1) These works deconstruct the idea of sculpture as solid, timeless and monumental by introducing the properties of fluidity, translucency and evanescence. Their continually changing forms interact with the forces of temperature, gravity, atmospheric pressure and humidity, and can never be repeated, providing a challenge to the geometry and seriality of minimalist sculpture, which was at its peak in the mid 1960s. Medalla’s first bubble machines were generated from plinth-like boxes that referenced minimal art, but later versions expanded into other forms such as stupas and gates. Recent iterations have featured clear plexiglass tubes, including the work acquired for the Gallery’s Collection.

While driven by artistic and scientific objectives, the bubble machines are also inspired by personal memories. Medalla has mentioned recalling from his early childhood the frothing mouth of a young resistance fighter, lying mortally wounded in the family garden, shot by a member of the Japanese occupying forces. Other memories include the foaming coconut milk in his mother’s cooking; the head of a glass of beer in Edinburgh; and the tropical clouds above Manila Bay, as well as those he saw over the Pacific on his first flight to the United States: several of his bubble machines are titled Cloud Canyons. 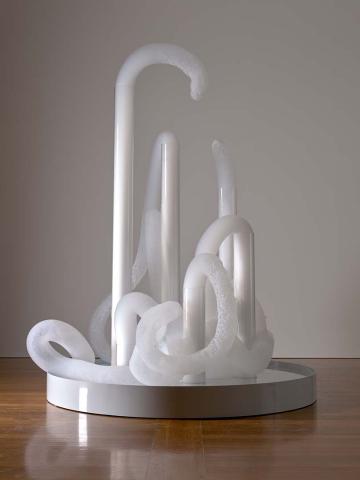