Moroccan artist mounir fatmi’s keen eye was developed as a child by the local flea market, where the sounds, smells and images of local and imported products competed for attention.(1) His appreciation for a variety of materials is reflected in a diverse practice that encompasses video, installation and drawing. The works frame historical events and political and religious ideologies in an open-ended manner by playfully underlining preconceptions and opening new perspectives. An example of this can be seen in the way that the artist chooses not to capitalise the first letters of his name, which draws attention to the way that common conventions are used to create power structures, such as the difference between common and proper nouns.(2)

For The angel’s black leg 2011, fatmi drew his inspiration from a painting by Fra Angelico entitled The healing of Deacon Justinian 1438-40 (predella of the San Marco Altarpiece in the Museo di San Marco, Florence). There are varying accounts of the martyred Christian saints Cosmas and Damian, their lives and miracle depicted in Fra Angelico’s work. Cosmas and Damian, most likely from present-day Syria, were brothers known for healing the sick without taking payment. In a posthumous miracle, Cosmas and Damian saved the life of the Roman deacon Justinian by removing his cancerous or gangrenous leg and transplanting the leg of a recently deceased Ethiopian Moor.(3) For fatmi, the Christians’ survival is not sufficient; the Moor must also live, and thus he proposes an aesthetic and cultural cross-transplant.

fatmi is particularly interested in the moments of reciprocal cultural, and linguistic, exchange, believing that the ‘“cultural graft”, as painful it might be, is indispensable for the survival of humanity as a whole’.(4) The artist transforms a black-and-white reproduction of Fra Angelico’s painting into a multi-layered video work of shifting dimensions and flickering perspectives. The image alternates between positive and negative, drawing our attention to the black transplanted leg on a white body that then becomes a white leg on a black body.

A hand hovers over The healing of Deacon Justinian with a loupe (hand lens), and later a magnifying glass, bringing into focus different areas of the work. The detail is constantly changing dependent on the angle of the loupe/magnifying glass, which means that elements within the painting seem to disperse, transform or disappear. This is interspersed with elements of the painting moving across the screen into recombined and reconfigured scenes. As Fra Angelico’s painting is blurred and dispersed, its stable narrative also begins to slide.

The close examination of this painting could be read as an empirical measurement of detail, an inspection of the truth of the representation. In The angel’s black leg, fatmi shows us that perspectives are constantly shifting, shrouded in shadowy layers or entirely disconnected from the whole. The increasingly enigmatic and indecipherable imagery alludes to the fluidity of representation. As cultural theorist Siobhan Shilton points out:

. . . in postcolonial art, multiple perspectives emerge in the spectator’s interaction with the work; the features of multiplicity, ambiguity and (frequently) simultaneity coalesce specifically to encourage a renegotiation of what have become overdetermined signs, thus allowing for the possibility of new, postcolonial ways of seeing. Mounir Fatmi’s work demonstrates such contrapuntal, yet multiperspectival aesthetics.(5)

The angel’s black leg is a strong example of fatmi’s interest in destabilising the power of images. This turning-inside-out is most literally expressed in a reversal of the colour scheme of the angel. The X-ray effect mutes the forms and draws attention the narrative content of the renaissance work. fatmi explores this simultaneous narrowing of the spectator’s viewpoint and opening up a space for reflection and new perspective. 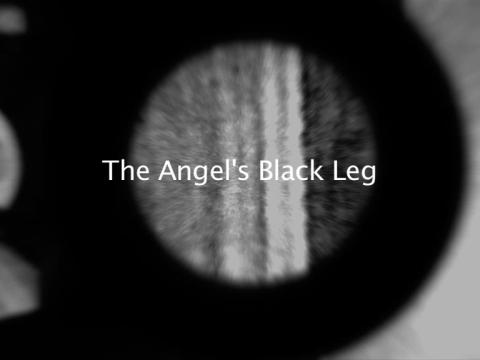