A central figure in Japanese photography since the 1960s, Daido Moriyama is renowned for his distinctive visual style and his singular commitment to documenting the everyday life of a densely urbanised society. An autodidact, Moriyama began his career as an assistant to renowned photographer Eikoh Hosoe in 1961, and developed a practice that combined Hosoe’s and Shomei Tomatsu’s striking documents of postwar Japan with the influence of North American street photographers like Robert Frank and William Klein, the bohemian photo-narratives of Ed van der Elsken, and the emerging Pop style of Andy Warhol. On joining the group of photographers associated with experimental magazine Provoke in the late 1960s, he further honed his methodology to epitomise the group’s stark ‘are, bure, boke, kontempo’ (raw, blurred, out-of-focus, contemporary) style.

Moriyama’s early work evoked the sociopolitical turmoil in which Japanese society found itself in the late 1960s and early 1970s, when widespread dissatisfaction with the nation’s role in the Cold War led to street fighting, terrorism and factional unrest. During this period, Moriyama and his Provoke colleagues pushed photographic representation to its limit, with their unusual angles, obscured subjects and gritty, grainy images, shooting through glass and fabric, deliberately mishandling shutter and darkroom processes, and re-photographing journalistic and commercial imagery to produce an intense, alienating vision of a society in transition. Over the years, he has demonstrated a profound engagement with the street life of Japan, focusing on metropolitan Tokyo and other towns where changes in the country’s social fabric registered, in an ongoing visual and theoretical dialogue with his Provoke colleague and rival Takuma Nakahira and the mercurial Nobuyoshi Araki.

His trademark high-contrast, black-and-white style is captured beautifully in the recent acquisition Shinjuku 2003, named for the commercial, administrative and entertainment district on Tokyo’s west side. Shinjuku is home to the world’s busiest railway station, to a dizzying blend of skyscrapers, luxury hotels, government offices, and department stores, but also Tokyo’s largest red-light area, its Koreatown, its gay and lesbian district, and labyrinthine warrens of tiny bars and yakitori vendors. Moriyama has lived and worked in the area since the 1960s, and between 2000 and 2004 subjected it to intense photographic study over a series of books and photographic essays that culminated in a collaborative exhibition with Araki held, appropriately, at Tokyo Opera City Art Gallery, on Shinjuku’s western edge.

In this 2003 photograph, drawn from the photo essay filmography 6 and originally published in the magazine 10+1, a single figure, at once androgynous and feminine, stands in the neon glow of a Shinjuku alley. The figure is captured candidly, slouching on enormous platform shoes and clasping a shopping bag, but with a fashionably poised cigarette and a gaze directed somewhere other than the barrage of surrounding fluorescent signs and banners advertising convenience stores, karaoke booths and shabu-shabu. This is a Japan distinct from the media image of elegant temples and cherry blossoms, of animated fantasy and high-tech production, yet it reads as natural, so adapted is the photographer to his context. Moriyama provides a human-scaled, street level counterpoint to the skyscrapers gleaming above. His is a project devoted to undermining conventional depictions of the spaces of life and living, and it is achieved simply by inhabiting them. 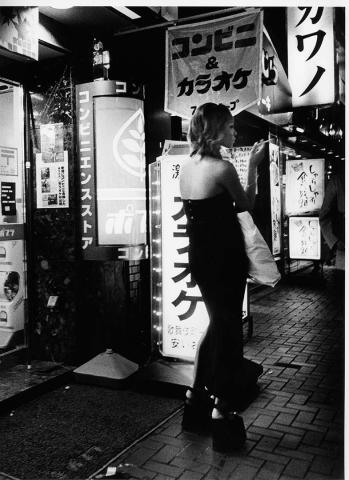