On first encountering Cai Guo-Qiang’s 2013 installation Heritage, many visitors gasp in awe and surprise, a visceral response that is at once sensory and emotional. While many contemporary works of art evoke a sense of wonder, be it through scale, technical virtuosity, or other evidence of extraordinarily intensive labour, such a genuine feeling is difficult to orchestrate. Cai’s work displays all three of these attributes, and contains an additional element: a powerful aura of stillness and resolve that the artist has described as a ‘religious solemnity’, which may explain this deep response in people. The centrepiece of ‘Falling Back to Earth’ - Cai’s exhibition at the Gallery of Modern Art in 2013-14, Heritage offers an indelible, if impossible, image of the natural world in a moment of perfect harmony, while also gently evoking a mood of crisis.

The work comprises 99 replicas of animals (carved from polystyrene and covered in goat hide) that bow to drink from a vast blue pool surrounded by white sand. There are uncanny versions of beasts from across the world, from tigers, giraffes and zebras to polar bears and chimpanzees, to wombats and kangaroos. The work was initially inspired by an image that came to the artist after travelling to North Stradbroke Island (Minjerribah), off the coast of Brisbane, in 2011. The pristine environment of the work embodies Cai’s perception of Queensland as a kind of ‘last paradise’, where the woes plaguing the rest of the human and natural worlds are yet to take hold. The allegory that Heritage creates of a harmonious multicultural society within a unique and beautiful landscape is understood as an ideal, its tensions and fractures lying just below the surface. The only movement is a single drip of water that falls from the ceiling into the pool, its slight disturbance reminding us that this conviviality cannot last. Other questions begin to arise: what has brought these unlikely animals together? Is this the only place they can find sustenance and peace? What would happen if they lifted their heads?

While best known for dramatic explosion events, in which gunpowder and fireworks are used to create ritualistic spectacles in both remote and urban sites, Cai has also created a number of elaborate installations throughout his career. They reflect his early training in theatre design and performance: Cai travelled China with a propaganda troupe during the Cultural Revolution era of the early 1970s and studied at the Shanghai Theatre Academy in the 1980s. These experiences have clearly informed his approach to installation, ‘instilling them with particular temporal and spatial dynamism and performance sensibility’.(1) An ongoing motif is the use of animals, configured in narrative tableaus that convey the artist’s concerns for humanity’s estrangement from nature, and its inexhaustible tendency to inflict violence on others.

Heritage is one of the most ambitious commissions that the Gallery has undertaken, from one of the world’s most acclaimed contemporary artists. With the generous assistance of Win Schubert through the Josephine Ulrick and Win Schubert Diversity Foundation, it is now part of the Collection. Heritage augments the major gunpowder drawing Cai created for ‘The Second Asia Pacific Triennial of Contemporary Art’ in 1996, and adds significantly to the group of important installations in the Collection by leading Chinese artists including Huang Yong Ping, Ai Weiwei and Xu Bing. Like these artists, Cai Guo-Qiang draws on Chinese philosophy, aesthetics and craftsmanship in the conception and production of his works, yet he has always also looked outward - beyond borders, cultural differences, even beyond Earth, as in his ‘Projects for Extraterrestrials’ series. His work strives to synthesise and make visible to us the unseen forces of history, memory and culture that shape our lives, wherever we may live, and his ability to connect is no better expressed than in that first gasp of wonder 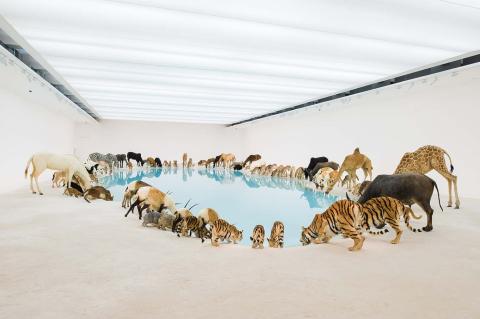