In Gordon Bennett’s splendidly savage painting Notes to Basquiat: Perfect teeth 2000, his bright, biting satire sets white teeth against black skin in a retro pop-culture parody; the word ‘mono’ in the centre of the canvas suggests the dominance of one colour in art and life, as well as implying what we might think of monotones (wherever found) and the assertion of a ‘monoculture’. It’s vintage Bennett: taking no prisoners, refusing not to be furious, making viewers confront racism in all its sly expressions.Notes to Basquiat: Perfect Teeth comes from the important extended series, ‘Notes to Basquiat’, which was a major theme in Bennett’s work throughout the 1990s - a selection of works on paper from this series was included in ‘The Third Asia-Pacific Triennial of Contemporary Art’ in 1999.

Notes to Basquiat was named for the American Jean-Michel Basquiat (1960-88), a precocious young artist of mixed Puerto Rican and Haitian-American heritage, originally a graffiti artist, whose star flamed brightly in the energetic international art world of the 1980s; Perfect teeth riffs on Basquiat’s own paintings. The first African American artist to be internationally acclaimed, he was in many ways a model of the exotic success favoured in the rapacious celebrity stakes of the New York art world as much for his ethnic origins and youthful beauty as for his undoubted talent.

In 1998, ten years after his death, Bennett wrote an ‘open letter’ to Basquiat that explained his motivations:

'To some, writing a letter to a person posthumously may seem very tacky and an attempt to gain some kind of attention, even ‘steal’ your ‘crown’. That is not my intention, I have had my own experiences of being crowned in Australia, as an ‘Urban Aboriginal’ artist - underscored as that title is by racism and ‘primitivism’ - and I do not wear it well . . . The works I have produced are ‘notes’, nothing more, to you and your works, posthumously yes, but importantly for me - living in the suburbs of Brisbane in the context of Australia and its colonial history, about as far away from New York as you can get - these are also notes to the people who knew you and your works, those who carry you with them in their memories and perhaps in their hearts.'(1)

1 See Kelly Gellatly, ‘Citizen in the making: The art of Gordon Bennett’, in Gordon Bennett [exhibition catalogue], National Gallery of Victoria, Melbourne, 2007, p.21. The ‘open letter’ was originally published in a Sherman Galleries, Sydney, catalogue of 1999. 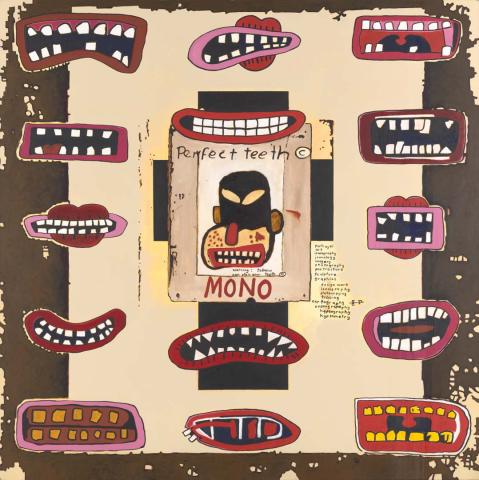