Since his first exhibitions at the beginning of the 2000s, Michael Sailstorfer has developed a distinctive approach to sculpture that draws on the legacies of Minimalism, Fluxus, Land art and the ‘readymade’. His practice is marked by a rigorously analytical, yet deeply affectionate, appreciation for the material dimension of the world - nature, architecture, and the things that inhabit these environments.

Sailstorfer’s early works were notable for the extraordinary transformations of found objects and sites. For example, in Herterichstrasse 119 2001, a house was subjected to a series of destructive processes before being reassembled as a sofa. In other works, a bus shelter was recast as a domestic interior (Wohnen mit Verkehrsanbindung 2001), a streetlamp was fired from a rocket to approximate the form of a shooting star (Sternschnuppe 2002), and a German police car became a drum kit (Schlagzeug 2003). With each work being an act of recycling and reorientation, wherein an existing object or structure is not so much added to as it is rearranged and represented, Sailstorfer’s practice takes an ecological stance in relation to the world of objects. Echoing conceptual artist Douglas Huebler’s 1969 statement, ‘The world is full of objects, more or less interesting; I do not wish to add any more’, Sailstorfer reorganises what is already in existence to reveal the latent forms and functions of the prosaic things in everyday life.

Wolken is a mass of black inner tubes, normally used for truck tyres, knotted together and suspended from the ceiling at different levels, evoking a darkly menacing cloud. Characteristic of Sailstorfer’s oeuvre, the work employs a humorous inversion of his chosen material - the tyre tubes that would normally be in motion and in contact with the earth have instead taken to the air, where they hover, perfectly still.

In an interview with curator Massimiliano Gioni, Sailstorfer described being ‘interested in the combination of very formal structures with narrative elements’.(1) In the case of Wolken, the initial experience of the work is of its materiality: the smell of rubber permeates the space, the mass of black, bulbous, floating shapes contrasts with the white, rectilinear interior of the Gallery, and the heavy-looking yet freely floating forms create a compelling interplay between the sculptural considerations of weight and volume. While Sailstorfer seeks to emphasise these formal qualities, he is also interested in the work’s associative and affective potential; there is, in fact, a strong romantic sensibility to the work, in its evocation of the landscape and profound effect on the ambience of the space in which it is installed, creating in a gallery the brooding atmosphere of an impending storm.

Michael Sailstorfer once described his practice in reference to fellow German sculptor Isa Genzeken (b.1948), who stated her desire to make art that comes ‘less from the head than from the stomach’.(2) While it can be said that formal aesthetic considerations frame Sailstorfer’s practice, at its core is an idiosyncratic and highly affective approach to making art: his found-object transformations are shot through with both poetic sensibility and humorous irony, opening up numerous ways of relating to, and thinking about, his art. 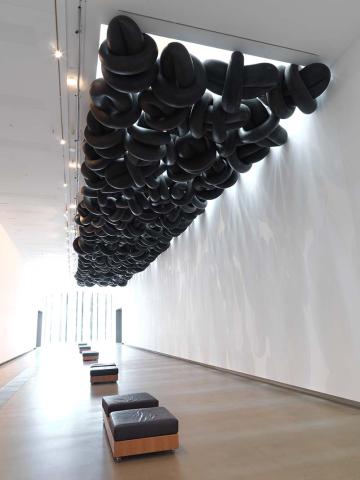