A ‘golden age’ in Chinese history, the Tang dynasty (618-906CE) was born out of a newly re-unified China. It followed the fall of the Sui dynasty (581-618) amid costly repairs to the Great Wall and an expensive military campaign against Korea. Emperor Gaozu (566-635), with the help of his son, Taizong of Tang (599-649), took power in 618 and expanded territories throughout much of central Asia, establishing strong trade centres that influenced art and culture and created a demand for export. A ceramics industry flourished, with lead-glazed pottery, in particular, beginning to be produced in great numbers in the northern kilns around Shaanxi, Hebei and Henan. This was driven largely by the vast requirements of elaborate tomb furnishings, intended for use by the dead in the afterlife, and which included human and animal figurines as well as vessels.(1) This exemplary horse represents the remarkable industry of figurative funerary ceramics during this prosperous period and is an image synonymous with Tang dynasty culture.

Lavish assemblages of funerary objects were sought after by nobility and high-ranking officials to honour their dead, and would be paraded through the metropolitan centres and displayed near the tombs prior to burial before being placed in special niches within the tombs.(2) A symbol of nobility and class, horses were used with drawn carriages prior to the Tang dynasty. However, Tang nobility began to adopt the European mode of riding astride horses; in accordance with this, the figurines were depicted as luxuriously equipped with saddles over animal furs and became the most popular animal with which to honour the dead.(3) This stocky, regal horse has a cream-coloured glaze except for the saddle and eyes, which are painted with pigment. A yellow ochre glaze covers the hooves and ears, and a streak runs from the saddle along the top of the mane to the muzzle. At the rear, a small hole is left where a tail, made of real horsehair, would have been attached.(4)

Lead glazes began appearing in application to pale white or straw-yellow coloured pottery in the sixth century; by the end of the seventh century, objects were readily decorated with a splash of coloured lead glaze. A range of polychrome glazes were being employed by the eighth century, including early examples of cobalt blue (the basis for later blue-and-white wares) and the popular Tang style known as sancai (three-colour) glaze - commonly, but not restricted to, straw-white, amber and green. These, together with the gradual superseding of earthenware by stoneware (which was later succeeded by porcelain), were major technological advances in ceramic production of the era.

This Tang horse was gifted to the Gallery as part of a major donation of over 80 Chinese artefacts, which include examples of Han dynasty pottery; Tang dynasty court figures; Liao, Yuan and Ming dynasty celadon; Ming and Qing dynasty porcelain; and a significant Qing textile collection encompassing rare badges of rank, bound feet shoes, purses and accessories. This generous gift features several imperial pieces and has made an outstanding contribution to the Gallery’s historical Asian collection. 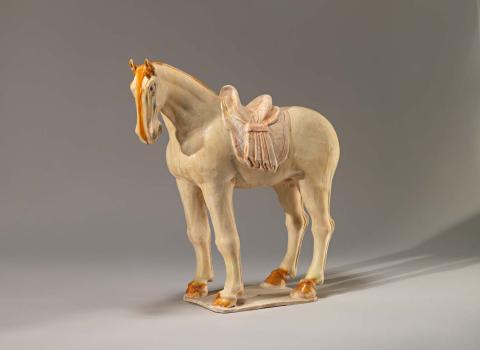