Senior Australian painter Robert Hunter is known for his delicately nuanced, close-toned, near-monochrome paintings that endlessly adapt and reinvent the abstract grid. He has been pursuing this strategy for more than four decades. Developed during the artistic radicalism of the 1960s, Hunter’s idiosyncratic visual language has transformed only in degrees over the years, having always been based on an implied grid of squares, circles or diagonals; the edges and planes demarcated with the aid of masking tape.(1)

Hunter first saw the American abstract artist Ad Reinhardt’s gridded black paintings in a touring exhibition, ‘Two Decades of American Painting’, at the National Gallery of Victoria in 1967, an experience which confirmed for him the future direction of his art. Partly inspired by Reinhardt’s gridded expositions in inky blacks, Hunter’s first solo show in 1968 featured 13 ‘white-on-white’ paintings, marking the beginning of a lifelong painting project. Reinhardt’s famous maxim, ‘The more stuff in it, the busier the work of art, the worse it is. More is less. Less is more’,(2) was taken to heart by Hunter, who eschewed painterly objectivity from then on.

No.1 untitled painting 1968 was purchased by James Mollison, AO, from the Tolarno Gallery stockroom in 1968 on the occasion of Hunter’s first exhibition.(3) In August 1968, Hunter was the youngest artist included in the important exhibition ‘The Field’ at the National Gallery of Victoria, which later toured to the Art Gallery of New South Wales. This exhibition was a watershed in the reception and interpretation of hard-edge abstraction, minimalism and conceptual art in Australia.

QAGOMA presently holds another of Hunter’s 1968 paintings, No.4 untitled painting, which is of a corresponding size, format and colouration, though No.1 untitled painting is comprised of an array of nine square planes of white with subtle tints of red and green, while No.4 untitled painting shows a progression to 16 smaller squares. These two early works very clearly indicate the terms of the artist’s steady undertaking, witnessing subtle changes to reveal the sequential character of Hunter’s project. Each Hunter painting relates to those that come before and then after it, building upon perceptual problems which are set, solved and then moved forward. This generative nature has made his practice arguably the most uncompromising and most unfettered by trends or shifting attitudes within Australian art history. 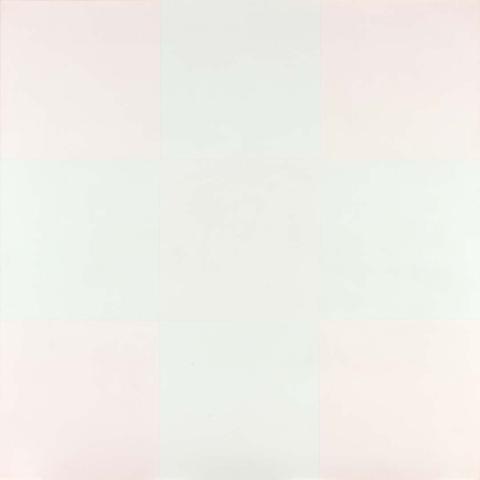 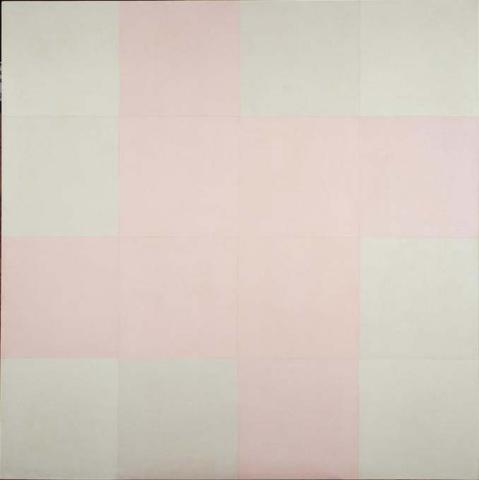