The day we met Alexia Kimgimani, a group of older Aibom women were demonstrating a pottery firing for us. After two weeks of travelling along the Sepik River looking at carving and visiting men’s haus tambaran (spirit houses), it was extraordinary to be in a village in which the women had such a strong presence. The three artists building the firing platform of bamboo and coconut midrib moved with grace and purpose, quickly finishing the job they had obviously performed many times before. As one of the women bent over to tend the burning grasses and coconut shells, she revealed a tattooed necklet of geometric designs, also found around the necks of the Aibom cooking pots. Our local guide explained that women with such tattoos held the knowledge of where to source the right clays for pottery, and that their rights to these pits were carefully guarded.

Born in Aibom, in the Chambri Lakes region of the Middle Sepik River, Papua New Guinea, Kimgimani is known locally and among international collectors as one of the most talented potters from this village. When we met her, her hands were covered with clay as she carefully created an impressive gugumbe (hearth). These earthenware cooking hearths, like many pots from Aibom, continue to be highly valued on the river, where they are traded, used for cooking, as well as sold to passing tourists. Perhaps the most iconic of the Aibom pots is the au or sago pot, which is made with rings of softened clay that are bashed together and then dragged upwards in rhythmic movements, at once creating and thinning its walls to form an upright jar shape reminiscent of the Jomon-era pots of Japan.(1) Reliefs of the faces of people and animals, applied to the neck area of the au, relate to mythological heroes. Historically, these reliefs were applied and painted by men but today the women confidently complete their pots from beginning to end, modelling the faces onto the pot necks before applying the final painted patterns.

Kimgimani works with bold contrasts, completing her au with designs in black and white or allowing the natural colours of the clay to do the work, juxtaposing rich, earthy terracotta with a darker clay to bring out the personality of the clan totem or spirit she wants to embody. Examples of both Kimgimani’s design approaches were recently acquired for the Gallery’s Collection - both are modelled with a beaked face, which most likely refers to the mythological figure Meintu, who is variously represented as a pig, eagle or bush spirit. Kimgimani’s pots form part of a new focus on the distinctive pottery being created in Papua New Guinea. 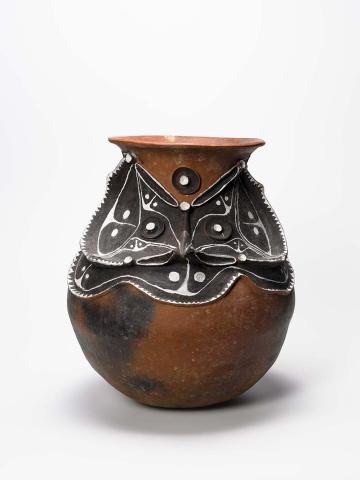 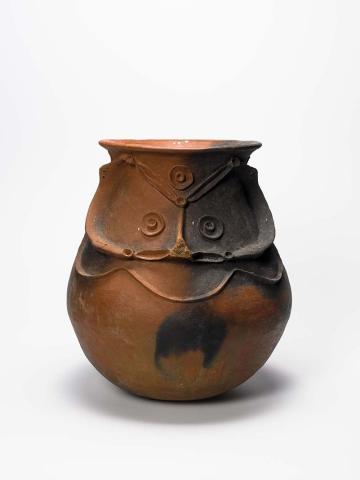